A Dunnville man was arrested in Boyle County Friday afternoon after he wrecked while intoxicated on Lebanon Road at 12:36 p.m. 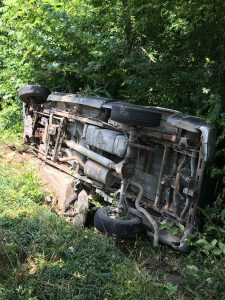 A man walked away from a wreck near Tank Pond Road and hitched a ride with a passerby, before being stopped by law enforcement.

Edward M. Herren, 43, wrecked about a mile and half out of Parksville toward Tank Pond Road.

According to Capt. Chris Stratton with the Boyle County Sheriff’s Department, Herren drove off the road, hit a culvert and broke the wheel of his car, causing it to flip on its side. Stratton said they are not sure what caused him to leave the road.

A passerby stopped to help Herren out of the vehicle, and while that person was alerting the Danville-Boyle County 911 Dispatch, Herren began walking along the road.

“They told him he needed to stay there, but he kept walking,” Stratton said.

Herren was picked up by a different motorist who was not aware of what had occurred. Law enforcement were informed of the type of car he had gotten into, which was later stopped by Constable Buck Sawyer in the Parksville area.

When deputies with the Boyle County Sheriff’s Department first arrived, Herren refused to get out of the vehicle.

Eventually, he did get out of the vehicle and was arrested by Deputy Taylor Bottoms. Herren was charged with driving under the influence and leaving the scene of a crime. He also faced warrants from Adair and Taylor counties. According to the Boyle County Detention Center’s website, Herren’s charges include failure to appear and non payment of fines from 2013.