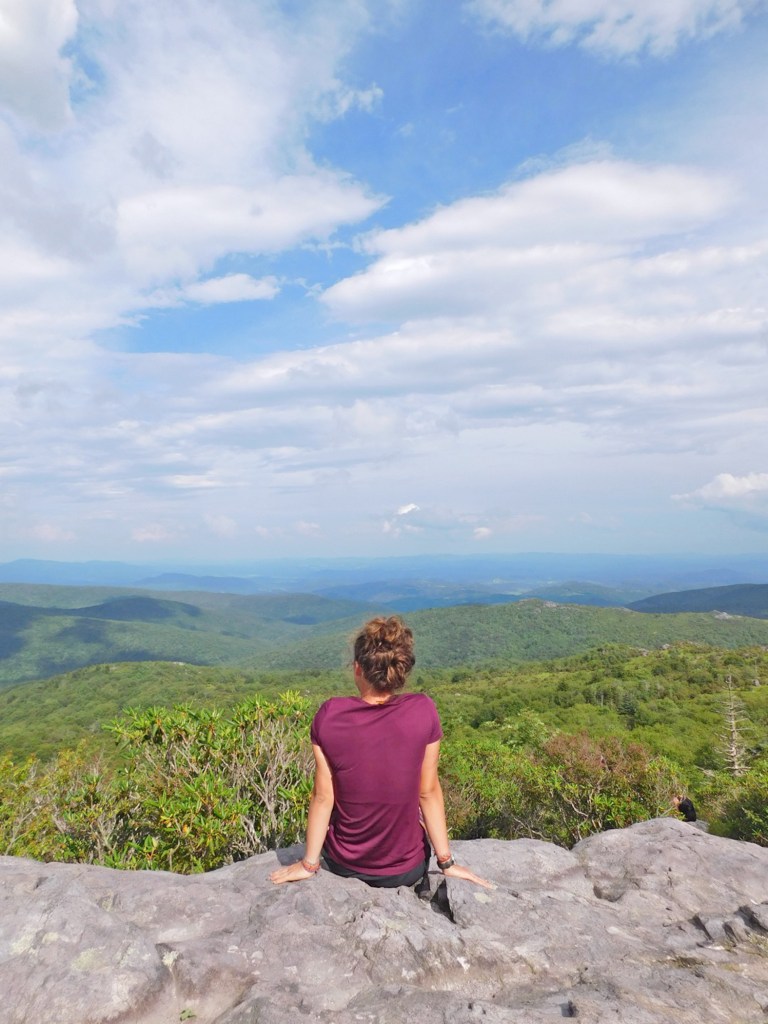 Photo submitted Claire Strysick, 16 of Danville, in Virginia, along the Appalachian Trail in July. 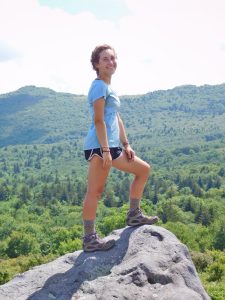 Photo submitted
Claire Strysick, 16 of Danville, in Virginia, along the Appalachian Trail in July.

For many, hiking the Appalachian Trail is a bucket list item, but 16-year-old Claire Strysick is already on her way, having tackled 103 miles of it this summer.

“It was a smaller section of the entire AT, but it was still a pretty big chunk,” Strysick, a Danville resident, said.

She got the opportunity through Eagle’s Nest Hante Adventures, which offers outdoor opportunities for people in seventh through twelfth grades. The adventures are offered by Eagle’s Nest Camp, based in western North Carolina. Strysick has attended summer camp there for six years, first for one-week sessions, then two-week sessions.

“It’s very outdoor-oriented,” she said. “You spend a lot of time in nature. It gets you really comfortable, which is nice.”

One of the classes offered is Walks and Waterfalls, where campers hike to waterfalls in the Pisgah Forest area, she said.

The camp, she said, is a big part of who she is.

“I love Eagle’s Nest Camp and I think it’s a great place. It’s a super nice community,” she said. “I can’t imagine not going there … I have so many friends I have made through that camp.”

This year is her “gap year” at the camp — she’s not necessarily the right age to be a camper, but she’s not old enough yet to be a counselor. So, Strysick decided to try one of the Hante Adventures they offered. Other Hante Adventures offered this summer included backpacking trips in the Pisgah Forest, Scotland and the Pacific northwest; and a Rocks and Rivers adventure, through the rivers and up the mountains in the Blue Ridge Mountains.

Strysick settled on the Appalachian Trail Hante. All together, there were 11 campers and two counselors on the trip. The trip was 20 days long, from June 25 to July 14.

Before departing, Strysick said she had to apply, explaining how much outdoors experience she had and being checked by a doctor to ensure she was healthy enough to make the trek.

The longest they hiked in one day was 12 miles, to make up for a short first day, but the group averaged about 10 miles a day. They had one “zero day” on July 4, where they didn’t hike at all, she said.

Each day started at 7:30 a.m. Everyone worked together to pack up the tents; boil water for breakfast, which usually consisted of granola or oatmeal; and review the map to plan the day.

Each camper served as a “leader of the day” at some point during the hike, and was expected to guide the rest of the group along the trail using the map.

“We worked on a lot of map-reading skills,” she said. “The counselors took a step back and it was very (camper-led), which was nice.”

The group slept in tents along the trail, or in shelters, if one was available. Only having three girls in the group meant they got to share a four-person tent, leaving room for their packs inside. 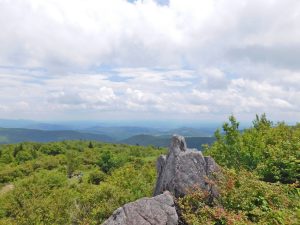 Strysick carried only about four changes of clothing for the trek. They would rinse those out when possible, and would shower in towns along the trail.

“Anytime there was a privy, we were happy,” Strysick said. “That took some getting used to. Any time we got to a town, we were like, ‘bathrooms, running water.’ But you get used to it after a while.”

Everyone’s a low-maintenance kind of person on the trail, she said.

Of the 13 people on the hike, everyone was required to do their part, Strysick said.

“It was important to make sure to help cook, make sure to help clean, help set things up, help get water filtered. If you don’t, the whole group is behind,” she said. “There’s so many things that you don’t think about, like the water filtration. We had bear bags to hang our food in at night … we had to cook and clean and set up tents.”

One morning, they realized the water filtration system had been set up wrong, and they had to wait while the water filtered for the group of 13, instead of having it ready to go that morning. That day, they didn’t leave camp until 11 a.m., she said.

“It’s super important to do your part.”

Learning to work in a community is one lesson she said she walked away with. They were split into groups for lunch and dinner, which required them to split carrying meals for the 20-day hike.

The campers had to carry all the trash after, until they found a dumpster.

“You don’t realize how much trash you make every day,” she said.

This was Strysick’s first time backpacking, although she has gone hiking before regularly. 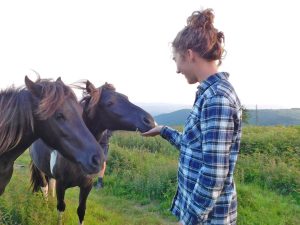 Photo submitted
Claire Strysick, 16 of Danville, in the Grayson Highlands, in Virginia, while she backpacked along the Appalachian Trail in July.

“There’s a big difference, especially when you put the pack on, because it weighs so much. It’s a totally different experience. With hiking, you can just look around and it’s not as challenging. Once you put that backpack on — hills, even downhill, you’re like, ‘Oh, no, it’s downhill.’ You can hurt your knees with all of that weight,” she said. “What I realized is that you use as much energy as you do when you run, because you have this heavy pack on, but you go an eighth to a sixteenth of the speed.”

The group averaged about two miles an hour, she said.

“It was challenging,” Strysick said.

After a while, however, the group began to click, with everyone getting into the “groove of things.”

The group was transported by the Eagle’s Nest camp to a location in Virginia, then hiked southbound, in contrast to many of Appalachian Trail hikers, who typically start at the southernmost point in Georgia and go north, to Maine.

Despite it being summer, Strysick said it was not that warm on the trail.

Campers were not allowed cell phones. Counselors had phones in case of emergencies, but there’s limited service on the Appalachian Trail. 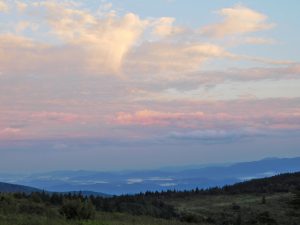 “It was nice too, to just take a break from that. It’s very important, especially if you’re out in nature, to just pay attention to things,” Strysick said. “It was super nice to fully immerse yourself in that.”

One of the weirdest things about being back is having a phone constantly, she said.

There was one emergency — one camper cut his hand, but it was during the group’s zero day and someone from camp had met them. He was quickly taken to an emergency room, got stitches and came back to hike with the rest of the group.

Other campers dealt with ingrown toenails. Strysick was one of those who battled blisters along the trek.

“That’s the thing, I wasn’t allowed to pop them. If you did, there’s a chance it could get infected. It’s very nerve-wracking. If you do get infected, you’re in the middle of nowhere,” she said. “You have to keep walking … You can’t just stop. Especially with that big of the group, you can’t say, ‘Let’s go to this shelter that’s closer, my feet are hurting.’ Especially with that big of a group of people, you just have to push through the pain and keep on trekking.”

Before going on the Hante, Strysick said she was a little apprehensive.

“I was a little reluctant. I was a little nervous … I thought I might die halfway through,” she said, smiling. “Once I got out there, I loved it. It was so cool.

“I like being in nature so much, it was nice to just only be in nature.”

Strysick’s love of nature is a shared family interest — she, her parents Michael Strysick and Karen Roper, and her sister Chloe Strysick, 12, enjoy spending a lot of time outdoors.

“My mom especially — both of my parents — are pretty outdoorsy. They’re always like, ‘Let’s go hiking,’” she said. “In Kentucky, there are a lot of hiking trails, especially near Danville. I like hiking in Shakertown a lot.”

Despite being a hiker and a runner for the Danville High School Track and Cross Country teams, Claire Strysick said she wasn’t “properly” in shape. 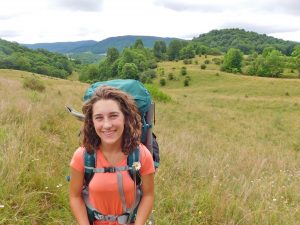 Strysick is also on the tennis and forensics teams at the school and will be a junior this fall.

She thinks people should get outdoors more often.

“We have a lot of different, very pretty areas that we can look at, hike and enjoy. Not a lot of people take advantage of it, I think, and more people should,” she said.

Someday, Strysick said, she would like to complete the Appalachian Trail.

“I think it would be really cool, especially when I get a little bit older, to go with a small group of people,” she said.

Strysick said she would also like to do some of the trail alone.

“You meet so many people on the trail, too. It’s such a great community. It’s a very interesting type of people that hike the AT. You definitely meet a lot of people, so you’re not alone,” she said. “I’m really happy I went; it was a lot of fun.”

To learn more about the Appalachian Trail, visit www.appalachiantrail.org.