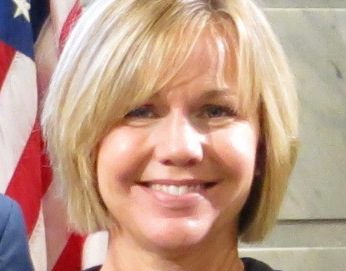 Niki Kinkade says she’s excited about what the future holds in store — and what it holds for art. Monday, the Community Arts Center’s Board of Directors announced she has been named executive director.

“I am excited, to say the least,” Kinkade says.

Although she’s been interim director since Mary Beth Touchstone retired, the board says there was quite a bit of interest in the position.

“We had a rich pool of applicants from throughout the region and even out of state,” says CAC’s board president, Barbara Hall. She says it was wonderful to see so much interest in the position.

“But after a thorough search and interview process, the board reached the unanimous conclusion that Niki is the most qualified for the position,” Hall says, and the board says it’s thrilled to welcome her aboard.

Kinkade’s official last day with the Great American Brass Band Festival, where she has been executive director for the past eight years, was Friday. However, she’s served on the board of directors for CAC since 2013, as well as organized and ran a children’s art program — the Creative Treehouse — during the “early years” of the Arts Center.

In a release from CAC’s board, members say Kinkade’s leadership reinvigorated the long-standing Brass Band Festival, “expanding its reach to new and broader audiences.” It lists development of aspects of GABBF — like the Friday evening Bayou and Brass — which Kinkade helped to create and implement, and how events served as a model for additional successful downtown events, engaging younger community members. Kinkade also championed the launch of the Great American Art Festival last year, including a visual arts component to the Brass Band Festival.

“Throughout her tenure as executive director of the Great American Brass Band Festival … Niki has demonstrated impressive leadership distinguished by a high level of creativity,” Michael Strysick, president of the GABBF Board of Directors, says in the release. “Over her eight years of leadership, the festival has grown and expanded in important ways, attracting new audiences all while retaining longtime attendees. We wish her nothing but the best, and I’m confident the Community Arts Center will not just thrive but grow under her direction.” 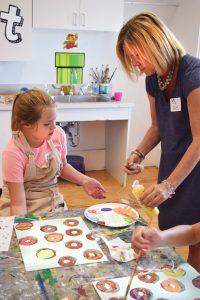 Niki Kinkade is no stranger to the Arts Center, having served on the Board of Directors since 2013. As Interim Director, she has been running the Arts Center’s popular Arts Exploration Camps this summer. Here she helps Olivia Bowen mix paint colors for her donut artwork.”

With a Bachelor of Arts in Art History from the University of South Florida and a Master of Arts in Teaching from Willamette University, Kinkade’s interests and career have been rooted in the arts. Her professional background includes several years as a classroom teacher as well as time spent as an art gallery manager, experiences which equipped her with the robust skillset she brings to her new position.

An active member of both the Danville community and the regional arts community, Kinkade sits on the Board of Directors of the Danville Creative District and is a member of the Rotary Club of Danville, LexArts, and the Kentucky Nonprofit Network.

Monday, Kinkade was full-force into her new, solidified position. She talks of the added programming coming this fall energetically.

“I can tease a few: There will be a class offered which will involve some trips, with the first one coming September or October to the Speed Art Museum (in Louisville),” Kinkade says. More than likely to be led by an art historian, the class will meet once or twice and take “a fancy buss over to Speed, special tours of galleries and include lunch or dinner.”

Classically, the Arts Center has offered 6-8 week long classes, but will now offer more one- or two-day workshops. “We have a felt-making class for two sessions that will be announced, various clay classes, a Henna class …”

CAC will continue to be involved with the homeschooled community, offering six different classes to them throughout the year, including a special percussion class with Lydia DiMartino that will be offered on a Saturday afternoon for all ages.

“And our Night at the Museum will happen in August, that will be the first one …” Kinkade says about offering kids a special all-nighter where they will explore galleries with a flashlight, watch a movie and have breakfast the next morning.

So far, Kinkade says there are no big plans to change any of the fundraisers, including the Art-A-Thon, which debuted this year, and the GoodGiving Challenge.

“Another new offering will be a night-market concept,” Kinkade says. The event doesn’t have an official title yet but will happen in November and December. “Our show will be lots of handmade art that people can buy and take home with them right then. We’ll have lots of local artists, all different types of art that can be purchased on the spot.”

Art history classes will be returning, and some new new preschool classes that haven’t been offered before will be on the slate.

“It’s starting to feel real now, being that I was the interim,” Kinkade says. “I am also in charge of summer camps, and today is my first official day with that. So — needless to say, I am looking at the future with a big smile on my face.”

For more information about the Community Arts Center and its programs, or to learn about exhibits, classes, scholarships or making a donation, please visit www.communityartscenter.net.

Friday was Niki Kinkade’s last day as executive director of the Great American Brass Band Festival. “I will help through the transition as long as they need,” Kinkade said.

A search will be held for the new director of GABBF. The board of directors met once last week and will do so again this week to firm up a search committee, review the job description and set a timetable.

“We hope to have a posting ready by Aug. 1 and complete the search in six to eight weeks. We believe it will be an attractive opportunity, since the festival continues to grow from strength to strength and has much positive momentum,” says Michael Strysick, president of GABBF’s board. “That said, it is a time of transition on several fronts, since the recent planned retirement of our longtime artistic director, Ron Holz, took place at the end of this year’s festival. Our new artistic director, John Stroube, shadowed Ron throughout the festival and has hit the ground running. All in all, we can’t wait for next June.”