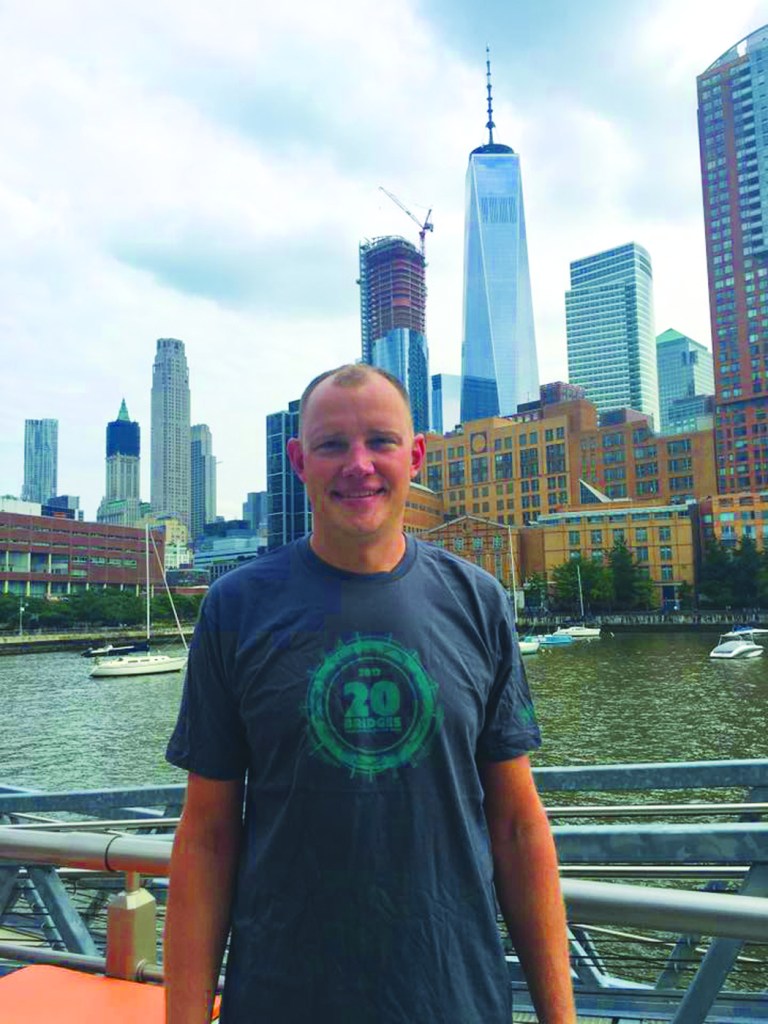 harlDozens of marathon swimmers took to the waters around Manhattan Island last weekend for the 20 Bridges Swim — a 28 1/2 mile marathon swim around the island.

Danville and Centre College alum Kyle Poland was one of them.

Poland finished the 20 Bridges Swim in seven hours, 16 minutes. It was his second leg of marathon swimming’s “Triple Crown,” the first coming in 2014 when he swam the English Channel in 11 hours, 19 minutes.

“It’s like the horse racing Triple Crown: the big event is the English Channel, which I did a few years ago,” Poland said. “That’s the equivalent of the Kentucky Derby. This New York swim is one of the other two legs of it, so my ultimate goal would be to get all three legs done. That’s why I picked this one.”

The third leg of the Triple Crown is the Catalina Channel in California.

The English Channel — the “Mount Everest” of open-water swimming, Poland said — is shorter than the swim around Manhattan by about seven miles, but the current around Manhattan helps speed up times, Poland said. The distance difference made him wary of the 20 Bridges swim at first.

“The interesting thing, I had known about it for awhile,” he said. “But the channel is 21 miles. This was 28, and I barley survived 21. I wasn’t sure if I wanted to tack on an extra seven miles. So for a long time, I sort of put it out as beyond what I want to even have a shot at.

“Last year, I was looking at the results from the New York swim and found out that a guy that did it also did the channel the same month I did. Even though it’s longer on paper, there’s a current that helps push you. So your time in the water is a lot less than it was in the channel. So I said, ‘well, this has potential if it means I’m only swimming for seven or eight hours.’”

Swimming for such lengthy amounts of time seems crazy — Poland said he gets some weird looks whenever he tells people about his hobby — but for him, it all started back in high school and college in Danville.

“I swam at Centre; the irony is I was mostly a sprinter,” he said. “This is the opposite end of the spectrum. I got into doing triathlons for a little bit, did all the different distances and was big into doing triathlons. That got to where I had done as much as I wanted to try and do there. My knees, everything just started to hurt when I started to go fast. The Hawaii Iron Man is the big Mount Everest equivalent for triathlons, so I tried a few times to qualify for that, I got close but I never qualified for it.”

Poland said he had a friend who gave him a book on open-water swimming, which made him look into the different events. The English Channel tops most marathon swimmers’ lists, and Poland said it was a good one because there were no qualifications needed.

Because of his history in Iron Man competitions, Poland knew he could exercise for the required amount of time to swim the channel. He was able to participate and his time there helped his application to the 20 Bridges Swim.

In New York, Poland was a part of one of the best groups in the event — the winner of his group, Mark Deans, set a course-record with a six hour, 34 minute time.

Other swimmers in his group hailed from places like Sydney, Australia and Israel.

“It is kind of neat. It’s a sport, but it’s a small sport. But these big events like this, they do have 60 people or so doing them,” Poland said. “They come from all over and that’s neat. It’s an application that you have to send in to the New York Open Water Swimming organization, and they kind of pick who goes where and if you qualify … It’s kind of funny being a midwestern guy, these open water people ask which ocean you train in.”

Poland, who now lives in Ohio with his wife Stephanie and two kids, didn’t have an ocean to prepare. Instead, he put in “a half-million yards” of training to prepare.

That takes a toll, and it’s one that has him planning to hold off on the third leg of the Triple Crown, the Catalina Channel.

“Part of me would like to do it tomorrow, but I’ve come to an agreement with my wife,” Poland said. “The channel and this one were fun to do, but it takes a lot of time to put in a half-million yards of training in. That’s time that other people have to take care of the kids, do things like that. So even without some agreements, basically it’s a good three or four years to get mentally and physically trained up for one of these things. After you’re done, it’s good to take a break.”

Another challenge of the Catalina crossing: sharks.

“They boat you out to Catalina Island and you swim back to the beach on California. The big difference with that one compared to New York and the (English) Channel, they have a lot more sharks in California than they do in the other two,” Poland said. “My wife said that she’s all for the other two, but she doesn’t want to raise the kids as a single parent. I said ‘well that’s fair.’ We’ll put that on the back burner for a little bit, but I do think at some point we’ll get out there and do it.”

Poland said his two kids are swimmers as well, something he’s happy about. His family made the trip to New York with him and he said it was a great experience for everyone.

“People look at you like you’re crazy and especially if they hear you’re swimming through the Harlem and the East River,” he said. “I was pleasantly surprised … the water, it gets a bad rap, it was really nice. Everyone in New York has been great. It’s been a good experience all-around for us.”

Competitiveness drives Zach Dampier to Scholar-Athlete of the Year…