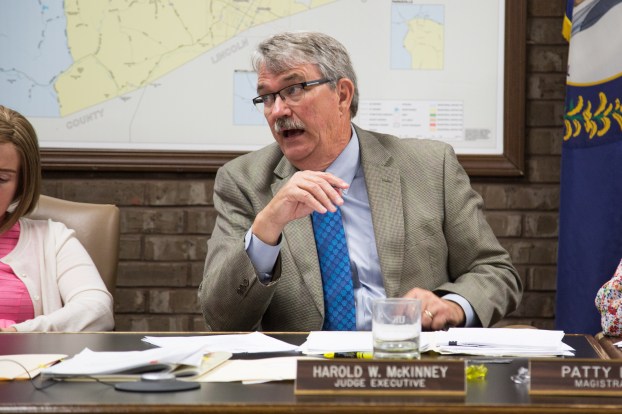 Boyle not willing to hand over 911 funds to Danville yet

For the second time this month, Magistrate John Caywood found himself asking the same question about an estimated $700,000 in 911-earmarked funds that Boyle County currently holds: “Whose money is it?”

Caywood brought the topic up to the other members of the fiscal court and county officials on Tuesday, spurred on by a July 12 memo sent to the court from Danville City Manager Ron Scott. That letter argues the $700,000 can only be spent on the official 911 “public service answering point” (PSAP) in Boyle County, which is the secure call center owned and operated by the city along Hustonville Road.

“Due to the need to meet operational costs and to upgrade equipment at our PSAP in order to maintain and improve 911 emergency telephone service for all residents of Boyle County, I am hereby respectfully requesting that all (state cell-phone tax) funds and local telephone tax receipt funds that are held by Boyle County for the benefit of our 911 PSAP be transferred to the City of Danville within 15 days of the date of this memorandum, along with a complete history and accounting of receipts, interest earnings or loss and disbursement of these funds,” Scott wrote in the letter. “I would hope that … all members of the fiscal court would readily conclude that voluntarily taking such action … is not a conflict with, but rather consistent with, your obligations and duties inherent in the nature of your office and in using these restricted funds in a timely manner for the purposes intended.”

The 15-day deadline from Scott ends today. The fiscal court did not agree to send the city any of the 911 funds; instead, Judge-Executive Harold McKinney said he would be sending a letter to Ron Scott, telling him the county wants to have a special meeting to discuss the funds further.

Caywood said he had believed the fiscal court had approved a motion “several months ago” to “write a check” to the city.

“I’m really turned around and I apologize that I can’t seem to work it through,” Caywood said. “But, we haven’t written a check to the best of my knowledge.”

Caywood said he’s getting questions from his constituents about why the county hasn’t written the city a check.

“Well, that’s an issue I need to explore,” Dean responded, noting that she hasn’t seen the letter sent by Scott.

McKinney said he hadn’t shared the letter with Dean yet.

“The meter is running short and I think we as court members need to know how to answer this and we need to know whose money it is,” Caywood said.

“First, I don’t think we ever agreed just to write a check,” McKinney said.

Instead, the fiscal court voted to give money to the city for a major 911 upgrade once the project had been bid out and not before, he said.

“We would use the money that we have collected to help pay for those things, but I don’t think we ever agreed just to write them a check.”

McKinney said he has heard the cost for the planned upgrade — which is expected to be complete by April 1, 2018, according to Scott’s letter — has “gone down pretty dramatically.”

McKinney then noted he is still “exploring where we should be getting our 911 dispatch, which brings up the issue — whose money is that?”

McKinney has been among a group of officials and first responders looking into the possibility of splitting apart 911 service in Boyle County. The idea is for 911 calls in Perryville, Junction City and the unincorporated portions of Boyle County to be handled by Bluegrass 911 in Garrard County instead of by the 911 call center in Danville. Danville’s call center would then only handle 911 calls made in Danville.

The funds that Boyle County is holding must be used for E911 services only, McKinney said.

“We can’t put it in our general fund; we can’t use it for anything except E911 services for the people of Boyle County,” he said.

The $700,000 came from two different sources — the Commercial Mobile Radio Service (CMRS) cell phone tax, which is collected at the state level; and a local ordinance that charges a monthly 911 fee on landline telephones.

McKinney said he met with the director of CMRS recently.

“They didn’t have anything definitive to say about who this money belonged to,” McKinney said.

Scott’s letter argues that CMRS funds should be distributed directly to the agency running the 911 call center and it’s against state law for the county to continue receiving those funds.

“Regardless of who may be correct on the legal issue of whether or not Boyle County officials are legally authorized to receive CMRS funds on behalf of the 911 PSAP … it is undisputed that those CMRS funds that are currently held by Boyle County officials are restricted by state law to be used for the exclusive benefit of the 911 PSAP that serves all people living in Boyle County,” Scott wrote. “There is no legal basis for holding these funds instead of transmitting these funds to the authorized PSAP.”

Boyle County Treasurer Mary Conley said there needs to be a written interlocal agreement in place as to how the $700,000 would be used before the county should give the city the funds.

“There needs to be a mechanism in place and agreement on both ends,” she said. “Otherwise, it’s just going to be sheer chaos.”

“We need to get to the bottom of this and get it solved and get it done as quickly as possible,” Hendricks said. “But obviously this meeting and our conversations today, we’re not going to be able to answer all the legal questions. There’s a lot more into it — we’re finding out that we didn’t know that there was so much involved.

“So I would suggest maybe two or three weeks down the road, we call a special meeting for nothing but to discuss and get answers that we all need for this 911 question and put it to bed.”

McKinney agreed a special meeting is the way to go and asked magistrates to send him their questions in writing so answers can be prepared in advance.

“I would think so,” McKinney said.

Sammons said he would appreciate McKinney getting the fiscal court some answers.

“We’re getting questions … that we can’t answer. ‘Why can’t you go ahead and turn that money over?’ We don’t have no idea,” Sammons said. “So, please get that for us so we can understand what’s going on.”

Hendricks said “one of the first things we need before we do anything is some kind of interlocal agreement.” 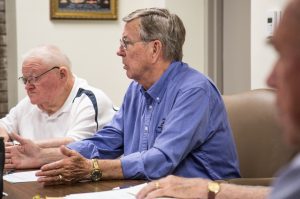 “I can tell you right now — I talked with the sheriff yesterday. If everything stays in place as it is, the only way he wants it to stay in place is if he has a seat at the table to determine what’s going on at 911,” Hendricks said. “He hasn’t been told anything in the last year about what’s going on. He did not know anything about the move, he did not know anything about the new (computer-assisted dispatch systems), the new radios — nothing. So I think that is something we should discuss at the special meeting.”

McKinney noted an interlocal agreement wouldn’t be just between Danville and Boyle County; it would also need to involve Junction City, Perryville and the Boyle County Fire Protection District.

“We’ve run with a handshake agreement for many, many years, and it’s worked. It doesn’t work right now; we need to fix it,” McKinney said. “When you sit down and start going through this, you realize it’s extremely complicated. … You can’t run it on a handshake anymore.”

“Judge, that letter you’re going to write (to the city)?” Sammons said. “I request it be a long one and very complicated for them to read.”