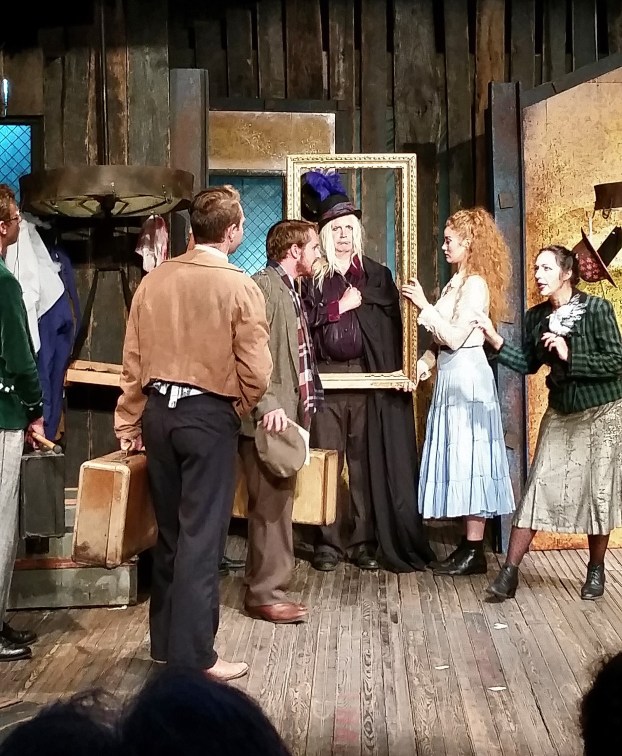 From the House: “Baskerville: A Sherlock Holmes Mystery,”

The new play now showing at Pioneer Playhouse, “Baskerville: A Sherlock Holmes Mystery,” will especially appeal to fans of “Monty Python’s Flying Circus” and the improv game show “Whose Line Is It Anyway?”

Despite being labeled a “mystery,” Baskerville is a comedy through-and-through. The laughs are a mile-a-minute in this highly enjoyable and chaotic parody of the famous Arthur Conan Doyle novel, “The Hound of the Baskervilles.”

J. Richey Nash and Liam McDemott star as Sherlock Holmes and Dr. Watson, respectively. The pair are set afloat in a raging ocean of other characters — 35 of them, according to the program, played by eight other actors.

The stage during “Baskerville” is a constant whirlwind of activity, as actors fly onto the stage portraying one person (or, in some cases, animals), then run off, only to return seconds later as a different character entirely. 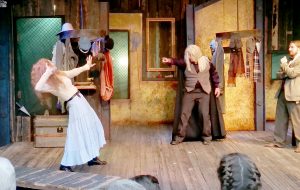 The massive ratio of characters to actors is on purpose — the play embraces the situation as one of its central jokes. Suspended, spinning coat racks hold the clothes and props for the different characters right on the stage and outfit changes sometimes occur right in the middle of a scene, rather than out of sight.

The second act takes this even further, as different actors begin to make jokes about the speed needed to change characters and the ability of the actors to fill all the roles necessary begins to (intentionally) break down. The play is wonderfully self-aware in this regard. 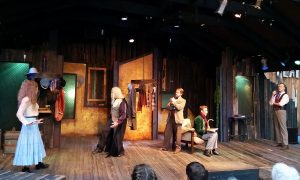 Later in the play, scenes and characters from earlier are often conjured onto the stage for split seconds when mentioned by Sherlock or Watson. In addition to serving as a memory aid and helping the audience keep track of the fast-paced story, these brief interjections from cartoony characters flitting across the stage or sticking their head out while executing a costume change are downright hilarious. They easily earned the biggest laughs from the audience.

This isn’t the first time Nash has been Sherlock Holmes on the Playhouse stage — he portrayed the famous detective character in 2015 in “Sherlock’s Secret Life.”

“Baskerville” doesn’t have the darker, dramatic elements that the 2015 play did, but Nash fills Holmes’ lighter shoes this year just as well as he did two years ago.

McDermott, who has become a Playhouse regular in recent years, also appeared in “Sherlock’s Secret Life,” though then he was Inspector Lestrade, and now he is Watson.

In another similarity to the 2015 Holmes play, Watson serves as the narrator, addressing the audience directly as he leads them through the story.

“Baskerville” doesn’t waste any time familiarizing the audience with its standard cast of Sherlock Holmes characters or back story — it assumes you know about 221B Baker Street, Inspector Lestrade, Watson’s chronicling of Sherlock’s superhuman sleuthing skills … This allows the cast to get to work immediately on making you laugh; and believe me, if you see “Baskerville,” you’ll be doing a lot of laughing. 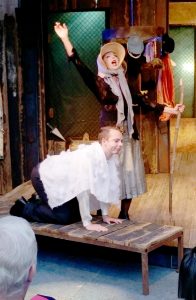 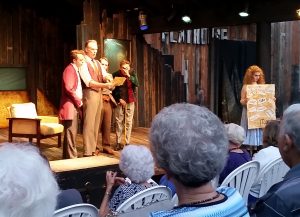 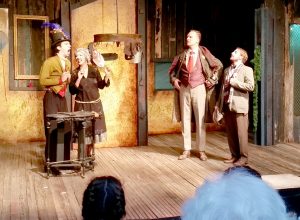 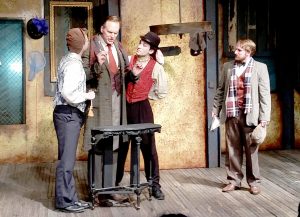