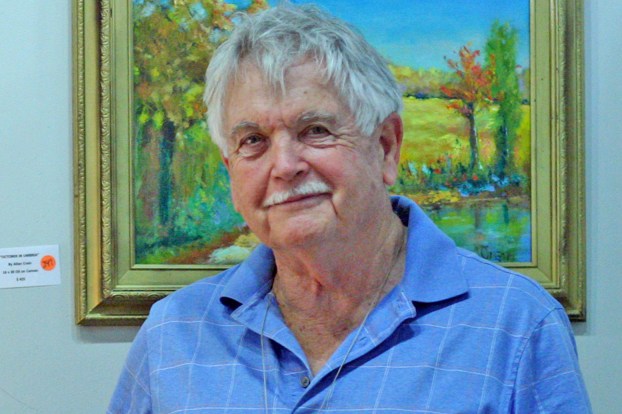 Kendra Peek/kendra.peek@amnews.com Allan Crain, owner of Art of Danville, was involved in a car wreck at Perryville Road and Parksville Crosspike, according to emergency officials. He was listed in serious condition at the University of Kentucky Chandler Medical Center Friday.

A Danville artist was sent to the hospital after a wreck involving a tractor-trailer and an SUV at the intersection of Perryville Road and the Parksville Crosspike at about 12:11 a.m. Friday.

Allan Crain, 77, was driving an SUV along Parksville Crosspike when officials believe a tractor trailer, driven by Dennis D. Honsberger, 68, of Kokomo, Indiana, attempted to back up onto the road.

“He was delivering a load to Danville, realized he was going the wrong way and was trying to turn around,” said Boyle County Sheriff’s Deputy Phillip Dean of Honsberger.

Crain’s vehicle went under the rear of the trailer. Boyle County Fire Department had to extricate him from the vehicle, according to the Danville police blotter.

Boyle County Emergency Management Director Mike Wilder said Crain was flown to the University of Kentucky Chandler Medical Center and he was conscious and alert at the time. According to the press department at the hospital, Crain is in serious condition.

Honsberger was not injured in the crash. Wilder said the vehicle was carrying 40,000 pounds of glass. An axle broke on the trailer during the crash, so a special tow truck capable of pulling the trailer had to be called from Lexington.

Speed was not a factor in the crash, Dean said.

He said the road reopened at 3:17 a.m. Boyle County EMS also assisted at the scene.

Crain owns the art gallery Art of Danville and has been painting for 60 years. The gallery is closed until Monday due to an emergency, according to its Facebook page.

Boyle not willing to hand over 911 funds to Danville yet

For the second time this month, Magistrate John Caywood found himself asking the same question about an estimated $700,000 in... read more