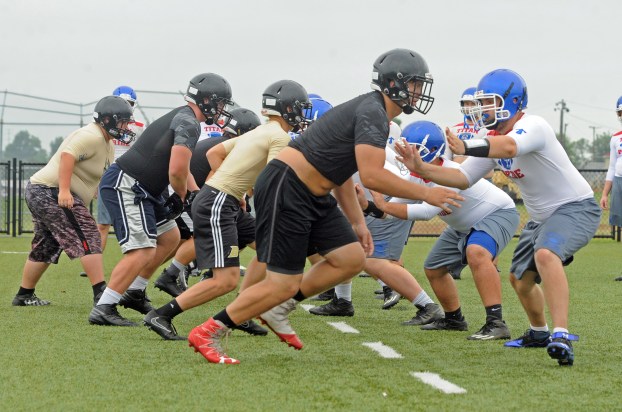 The two teams drilled separately before a 7-on-7 scrimmage.

Boyle head coach Chuck Smith and Mercer head coach David Buchanan agreed that it was a quality practice for both teams.

“This is really good work for us and I think David likes it as well,” Smith said. “To me, it’s about assignment, alignment and technique. You can really work your technique and work your feet to get in position. Of course, there’s no contact or anything like that, but I think you can get those three things out of it and make your football team better. I thought both teams did that today.”

Buchanan said having another quality team to go against is a big help.

“It’s sort of tough because there’s no contact. That’s why you really need to work with another good program that is disciplined,” he said. “They’re a good fit for us in that regard; this was a very productive day. We got a lot more done today than if we had been somewhere else or done something else.”

The Rebels made a notable position change about a week ago: Last season’s starting quarterback, Sam Tiller, moved to receiver and rising sophomore Reed Lanter took over behind center.

“We felt like that was the best decision for our football team,” Smith said. “I asked Sam Tiller to move positions about a week ago. There was a good, strong competition going between those two and there was no clear winner, I just thought I needed Sam to play another position for us. He showed up today on a couple of occasions. I’m really pleased with the move that we made and I was pleased with the way the offense executed.”

Tiller made a handful of grabs during the 7-on-7 portion of the scrimmage from Lanter and now-backup quarterback Grant Hotchkiss.

Mercer’s starting quarterback Gunnar Gillis was missing one of his primary targets Friday in receiver Trevon Faulkner. Faulkner has been heavily involved in AAU basketball games this summer but will be back with the football team on Monday.

Buchanan said that having a team like Boyle right down the road is a huge help, and sharing the field for an OTA was a big help.

“If we’re by ourselves, it’s just harder to get our guys going,” Buchanan said. “When you put another jersey out there, it immediately helps get the juices flowing and get the adrenaline going. It was good for us and a very productive day.”