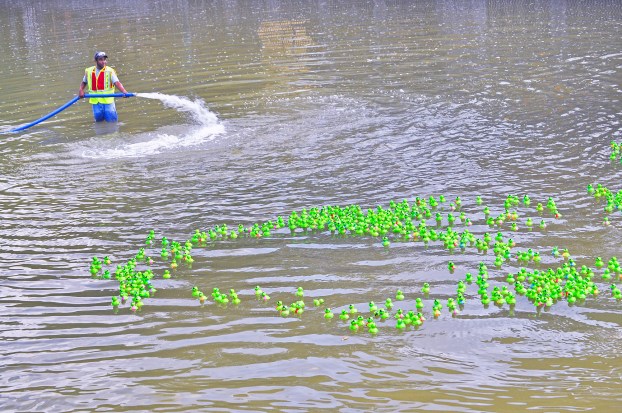 A worker helped splash turtles downriver after the wind blew them in the wrong direction last year. This year, Main Street will have a kayak team on hand to assist with moving turtles.

Turtles can be purchased online at snappinchaplinturtlederby.com; cost is one for $5 or six for $25. All proceeds will go to help repair Perryville’s collection of nine 19th century buildings on Merchants’ Row.

Downtown Perryville was the site of the first street fighting in the Civil War and suffered artillery shelling during the battle of Perryville on Oct. 8, 1862.

Proceeds from last year’s race went to repairing the siding on the Parks Store on Merchants’ Row, but more funds are needed to complete repairs. A current project is the Johnson-Brinton House.

The property, located at the corner of Buell Street and Second Street (also U.S. 68 and U.S. 150) was constructed in the 1840s. The home, an excellent example of Federal style architecture, was damaged during the battle when a cannonball crashed through the roof and an interior door. Following the battle, like many existing Perryville homes, it was used as a hospital.

Purchased in 2000, the Johnson-Brinton House underwent an extensive $356,000 exterior restoration through a federal grant secured by former Congressman Ben Chandler. Main Street Perryville is currently targeting this building for interior restoration to house its permanent offices and town welcome center.

Work will also include the construction of a period outbuilding to house public restrooms and vending machine facilities. Estimates to make needed repairs are $150,000. Main Street Perryville has roughly half the necessary funds to complete the project.

To complete all historic preservation and modern HVAC updates required for one of the oldest business districts in America, Main Street Perryville needs nearly $1 million to complete its mission. The Turtle Derby is Perryville Main Street’s largest fundraiser.

A minimum of 2,000 rubber turtles will be released into the Chaplin River and the first three turtles to cross the finish line will win cash prizes! Call to the post is 5 p.m. The first place prize is $1,000; second is $600; and third is $400.

Turtle adoptions must be made in the name of an adult, age 18 or older. You will not be able to keep an adopted turtle after the race.

The event is free and open to the public and there will be beer from West Sixth Brewing, food, music and a kid’s corner with bouncy houses, a splash pool, petting zoo and more.

At 4 p.m., a turtle costume and decorated wagon contest parade for children under 12 years old will leave from the Karrick-Parks House on Buell Street and walk through the festival. 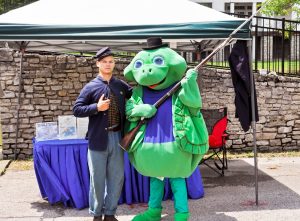 This year, Perryville Battlefield State Historic Site will offer a mini School of the Soldier to kids attending the festival. 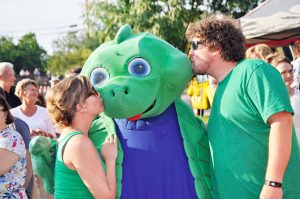