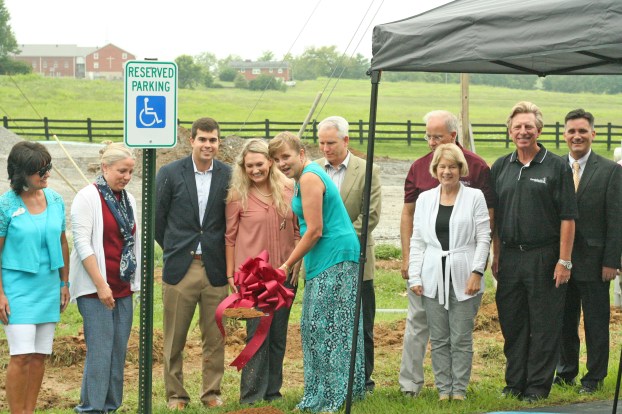 Kendra Peek/kendra.peek@amnews.com Amy Matthews, campus director for the Campbellsville University Harrodsburg campus, shovels a scoop of dirt at the groundbreaking for the new building to be built behind the Conover Education Center, surrounded by college administration and local elected officials.

The threat of rain didn’t dampen the crowd gathered at the groundbreaking for a new 4,500-square-foot building at the Harrodsburg campus of Campbellsville University Friday.

“When things are going full-speed this semester, (the Conover) building is full,” said President Michael Carter after the ceremony.

Enrollment at the Harrodsburg campus hit over 160 full-time students during the spring term. 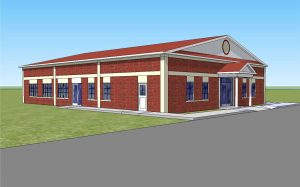 A rendering shows what a new building, slated to be open by January, will look like at Campbellsville University Harrodsburg.

The Harrodsburg campus opened about a year ago in the Conover Education Center, which was previously serving as an adult education center in Mercer County. The new building is anticipated to cost $500,000 and will house an academic support center, classrooms, a chapel and seven offices.

There are a variety of degrees and certifications offered at the college, including nursing, business administration, cosmetology, liberal arts, pastoral ministry, phlebotomy, pharmacy tech and information and technology management. This fall, a 20-month welding certification will be added, and there are future plans for degrees in social work, education and criminal justice, among others.

Carter called the offerings a “pretty fair variety” considering how new the center was.

“It fits well for a regional center. There are some pretty good options,” he said.

Once the new building is in place — it’s anticipated to be completed by the January term — the university plans to dismantle some existing outbuildings and establish walking paths from one building to the other. Carter said there is enough room to build a third structure on the property later on if needed.

Carter said they never anticipated the kind of growth the school has seen.

“We were surprised. This has happened much faster than we thought,” he said. “We’re thrilled. Our staff and faculty have responded with a great spirit. They’ve accepted the challenge.”

Deputy Commissioner of Veterans Affairs speaks to veterans in Danville