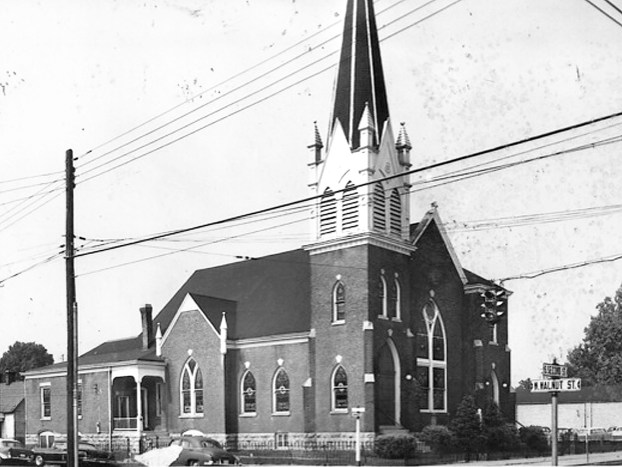 First Baptist Church, Second and Walnut streets, was dedicated in May 1901. It burned in December 1966.

First Baptist Church, Second and Walnut, has witnessed many trials and tribulations in its 171 years of existence and has come out stronger and stood as a beacon for the community.

The church was split in the mid-1850s, and the remaining congregation built a new sanctuary at its current location. The new church increased membership with long-time ministers and did not give up when a fire destroyed the building the day after Christmas in 1966.

First Baptist Church will observe its 171st anniversary this weekend in the second sanctuary built on the same land at the corner of Second and Walnut streets.

The church was organized the first Sunday in August 1846 with the help of First Baptist Church, formerly on Broadway. It was called the Green Street Baptist and was located at the bottom of what is now Martin Luther King Jr. Boulevard.

The Rev. Jordan Meaux was the first pastor who served for 10 years when the church split. Before the second pastor was called he moved a large number of members and organized a new church in the “Smokey Row” area known as Seventh and McMilan Court today.

The Rev. Elisha Green was called as pastor in 1856 and moved the church from Smokey Row to Green Street and built a brick sanctuary. Green preached there until 1865.

The church became one of leading black churches in the state under the leader of the Rev. Issac Slaughter. The membership increased by threefold. A new brick church was built with stained glass windows and two aisles.

Slaughter valued education as an important part of any community or organization and established the Baptist Academy on Russell Street. The school played an important role in the community for educating African-Americans.

He died during his pastorate and the Rev. Wallace Fisher was supply pastor for six months and was followed by the the Rev. David Slaughter who stayed six years.

The Rev. J. Edmond Wood was called as pastor and stayed 31 years. The church grew under his guidance and moved to the current location into an outstanding edifice.

The new church building was dedicated in May of 1901. It had a lecture and reception hall, suite of parlors, library, pastor’s study and recitation rooms for Sunday School. Membership grew to 1,000.

Wood wanted the new church to be a place for entertainment where people to gather for mental and moral improvement under religious influences.

Wood organized the first black newspaper, “The Torch Light”, and served as president of the Progressive National Baptist Convention.

After Wood left, the Rev. G . Hamilton Martin served as pastor for a year and the Rev. J.F.K. Moreland served as supply pastor.

Under his leadership, the church grew and once again became a leader in the state.

He organized a Boy Scout movement and reorganized the Young Women’s Club, and presided over the Baptist State Congress.

After a fire destroyed the church on Dec. 26, 1966, a new modern church building was dedicated a year later.

Carter retired in 1973 due to failing health and the Rev. Richard Hill came as pastor and served for 31 years. The church saw new growth both spiritually and physically. A bus ministry was initiated and the youth department was revitalized.

One of the members, the Rev. Ronald P. McCowan served as interim pastor a few months. He became the new pastor in January 2007. He stayed until August 2010 when the Rev. Darrick Briscoe became pastor.

Briscoe began preaching at the age of 9.

One of his first sermons was at First Baptist when he stood on a box.

He grew up in Versailles and attended Zion Hill Missionary Baptist Church in Midway.

“I have spent the majority of my life in church,” said 43-year-old Briscoe.

He came to Danville from St. John Missionary Baptist Church. “It’s a big transition coming from an urban church to a rural church.”

He is seeking to have First Baptist to be “a place where everyone feels welcome and knows they have value in the body of Christ.”

He calls himself a preaching and teaching minister of song and scripture and wants to take his ministry to the streets.

“We attend festivals and give water to people. We want to be present in the community,” he said.

“We want our church to be a place of love, quoting scripture in John 13, verse 35 — ‘By this shall all men know that ye are my disciples, if ye have love one to another.’”

He said the church has a strong attendance during Sunday worship hour with a blend of people of several nationalities, including several Centre College students. 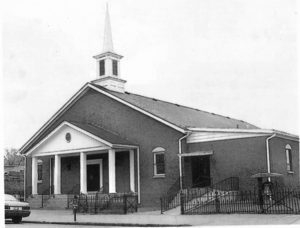 The current church building was dedicated a year later.

BY JERRY SAMPSON Question: Jerry, My father was an avid historian and was always researching genealogy. This was one of... read more