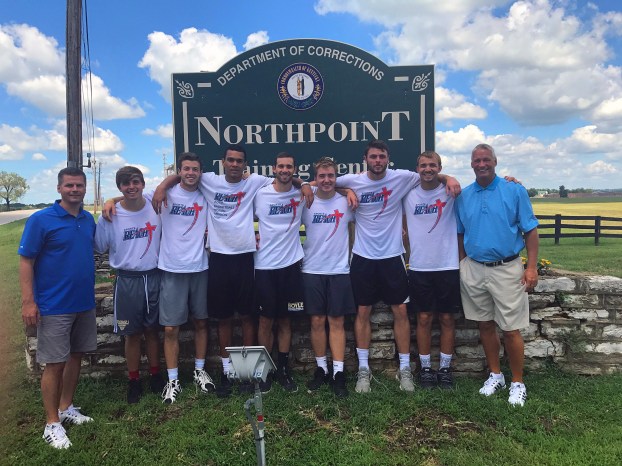 Chapman Bean, a 2015 Boyle graduate, set up a trip to the prison with Sports Reach, a Christian organization that “reaches and teaches the world through sports.”

Bean was joined by a handful of former teammates and coaches from the Rebels’ 2015 Final Four run for the trip, and it’s something that he he has a passion for: He’ll graduate from Campbellsville University a year early next year with a degree in pastoral ministry.

“All of this is preparing me for being a minister, loving people,” Bean said. “Things like this, this is what ministry is. This is it. It’s great having these experiences. They’ve grown me a lot of ways, my heart and my passion for people. It’s just growing on a daily basis.”

Bean and former teammate Hagen Tyler — who plays basketball for Campbellsville — went on a trip to Orlando, Florida with Sports Reach in June. They played in four prisons there, and Tyler said it was an eye-opener.

“It was a great experience, it really opened my eyes,” Tyler said. “I gave my life to Christ when I went up there. It was just an unbelievable experience.The prisons love it, they love playing with us. It’s something different. Somebody comes in and it’s a different experience for them. It’s just a lot of fun for all of us.”

Both Bean and Tyler said that it’s a huge attraction for prisoners — Bean estimated about 150 came and lined the court during their game Saturday.

“I’m glad Chapman set this up because some of these guys have never been,” Tyler said before the trip. “I want some of these guys to see it because they might need to, to help change their life. It sure changed mine. It’s great to do something different, it’s not like playing pickup at the gym.” 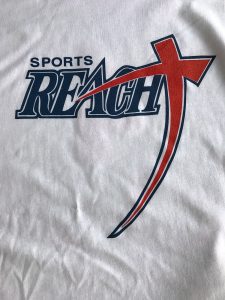 “At the time, I wasn’t real sure about going to a prison and playing,” Tyler said. “But when the time got close, I thought it’d be good for me and I’m so glad I did. It was a great experience. I can’t thank Robbie enough for taking me.”

For guys like Zach Leigh and Tristen Morrow, it was their first time. Leigh said he received a text message from Bean about playing basketball in a prison, and he said he “was all about it.”

Leigh and Morrow each had done mission work in the past, but nothing like playing basketball in a prison. Leigh said he’s majoring in criminal justice at Campbellsville and wants to be a police officer.

He said sharing God’s word was his primary reason for making the trip Saturday.

“The experience, I want to get to one person,” Leigh said. “It doesn’t have to be the full yard, just get one inch, get them going in the right direction.”

Morrow graduated from Boyle in 2014 and said he wanted to be a light for people who don’t get much outside-world interaction.

“I just want to provide the prisoners with an opportunity that we always get, just shed a little bit of light through God’s word and things,” Morrow said. “Hopefully I can do that and just give them that opportunity to do something new, see people and play basketball.”

It was a new opportunity for Adams and Webb, but one that both of them were more than willing to play a role in.

“Chapman called and said they were doing an outreach program at the prison, he wanted some of his former teammates and coaches to come,” Adams said. “We’re thrilled to be able to help and support what he’s pursuing.This is the first time I’ve ever been to a prison. We went to the Dominican Republic one time and did some basketball stuff, but I’ve never been in an actual prison.”

Bean said that Adams and Webb tried to do some coaching from the sidelines, it just wasn’t enough.

“They loved it. They tried (coaching), coach Adams said at one point, ‘you just can’t coach athleticism, and they’ve got it,’” Bean said.

The atmosphere was similar to a high-school basketball game, Bean said, but there was more of a buzz in the air.

“Everyone is into it. It’s fun,” he said. “Not quite the passion, but there’s that excitement. As soon as they see us walk into the yard, every eye is on us. They’re looking to see if we’re athletic, if we’re able to give them a game. Some of them will bet on the game. Some of them lose, there were multiple people doing pushups after the game.”

After the game was over, Wigginton gave his testimony. He was a basketball player at Florida Tech, a Division II school, and was having success. But an ankle injury forced him to give up the game at that level.

“He gave up what he loved most, and he shared that story today because he knew they had something taken away, their freedom, right now,” Bean said. “He talked about how he’s found freedom in Christ and he’s declared pastoral ministry his major at Campbellsville.”

After Wigginton spoke, Bean shared with the prisoners.

“I just shared a little bit about the gospel, what it means to them today and how they can have forgiveness and acceptance if they let Jesus into their heart,” he said. “Your past doesn’t define your future, and I think Jesus wants us to tell everyone we can about that.”

Bean said he was grateful for having the opportunity and said that it was a joy for everyone involved.

“The guys were just so appreciative of having us there, having people come and spend time with them who aren’t guards or paid to be there,” he said. “They just really are appreciative of us giving our time and showing love, something that’s not common in the prison system. I think that’s something we were able to do today.”

In the future, Bean said he’d like to continue this unique style of reaching people’s hearts through sport.

“I thought maybe we could do this in Danville or Lexington, and I think we want to keep going,” he said. “… I think we can keep doing this. It’s just a heck of an opportunity to give back. It’s something that I’m truly excited about and it brings joy to my heart to be able to spend time with those guys and know that I’m making a difference.”

He was also thankful for his teammates and coaches who came out and gave him the support.

“Having coach Adams and coach Webb there made it special,” Bean said. “When we won the region championship in 2015, that was icing on the cake but what is truly the icing is the lasting relationship I have with these guys. I’m going to care about them the rest of my life, I know they care about me and they’re willing to go with me out of their comfort zone. That support, that’s something you just can’t say thanks enough and be grateful. It means the world to me.”