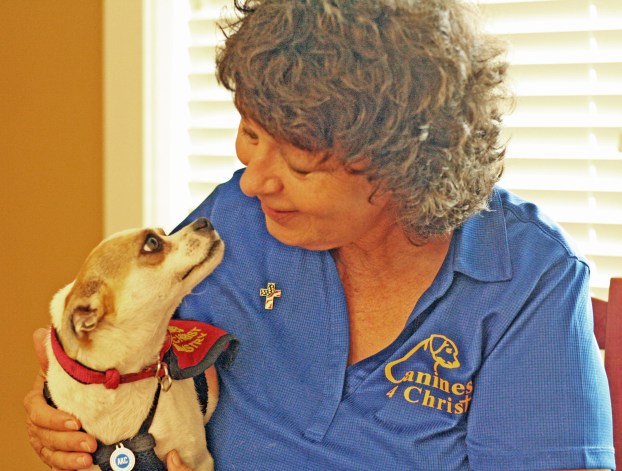 Kendra Peek/kendra.peek@amnews.com Gayle Schroyer with Zaccheus, a dog adopted from the Danville-Boyle County Humane Society, who visits nursing homes, hospitals and more with her, even helping kids as they learn to read through the Reading Buddies program. 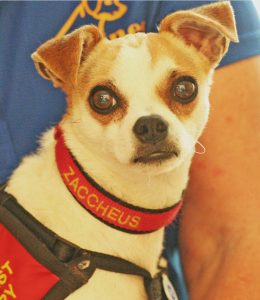 Kendra Peek/kendra.peek@amnews.com
Zaccheus, a little dog adopted from the Danville-Boyle County Humane Society, who has been using his calm demeanor and big heart to bring comfort to people in nursing homes, hospitals and more, even helping children learn to read through a Reading Buddies program. He was adopted by owner Gayle Schroyer and the two work through Canines for Christ, an international organization.

A little dog from the Danville-Boyle County Humane Society is making a big impact in the lives of those he meets, with the help of his Willisburg owner.

He’s named Zaccheus after the tax collector in Luke 19 in the Bible because “he’s a wee little dog.” Zaccheus and his owner Gayle Schroyer, who calls him Zack, are part of Canines 4 Christ, a non-profit international organization which works to use dogs in therapy situations.
It all started last November when Schroyer, who had just moved to Willisburg from Boyle County, found out about the organization.

“I thought it would be neat, when I would see dogs going into hospitals — I thought a therapy dog would be neat — and I really like animals,” she said. “I was at the Amish store in Willisburg and I saw this van that had a ‘Canines 4 Christ’ sign on the sides. The door was opened and there was this big, black dog in her crate in the back.

“I went inside and started asking questions. I found the lady that belonged to that van and that dog.”

That lady was Libby Lambert-Stava, and the dog was Blessing. Lambert-Stava answered Schroyer’s questions and eventually became her mentor and guide as she worked through the process to joining the organization.

“I just adore my dogs, but I knew they would not be the right kind as therapy dogs,” Schroyer said.

The next week, she looked online at the dogs at the Danville-Boyle County Humane Society, where she says there were scads and scads of dogs. 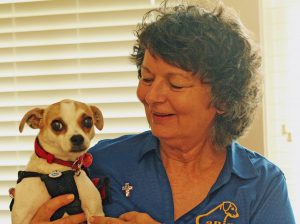 Kendra Peek/kendra.peek@amnews.com
Gayle Schroyer with Zaccheus, a dog adopted from the Danville-Boyle County Humane Society, who visits nursing homes, hospitals and more with her, even helping kids as they learn to read through the Reading Buddies program.

“I thought it might be nice to have a little dog if I could find one with the proper personality. Some people are afraid of dogs and so I was specifically looking for a little dog,” she said. “I walked in and he came walking up to me on his hind legs, with his tail wagging and not barking.

“That was it. I didn’t even look at another dog.”

It was a perfect match.

Zack and all other dogs that become part of Canines 4 Christ dogs have to go through the American Kennel Club’s Canine Good Citizen test. The dogs are tested on 10 behaviors in obedience, training and personality; and have to show they can politely and safely interact with the public, with other dogs and can be left with another person, if necessary, Schroyer said.

Also, all dogs have to be at least one year old, up-to-date on vaccinations and have a current health certificate from a licensed veterinarian. When Zack was inspected, Schroyer said, they thought he might not quite be a year old and was advised to try the puppy test first.

“They told me not to expect him to do well when I took him in for his test,” she said.

But he was allowed to take the test anyway. She’d been working diligently with him prior, and he had gone through training with Cheri Carbone in Danville; Danville is where Zack took the test and Schroyer said he passed everything on the first try.

The application process also includes questions about the dog, its disposition, training and health; as well as information about the handler, their background, faith and ability to serve.

Canines 4 Christ began in 2007 and currently up to 700 teams around the world. Schroyer said she believed there were four active teams in Kentucky, with three being in the Willsburg area: Schroyer and Zack, Lambert-Stava and Blessing, and Sharon Kennard and Peprika. 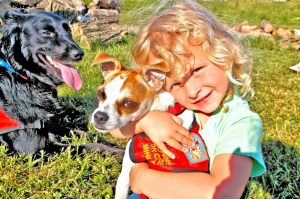 Photo submitted
Zaccheus with Audrey Ramey, one of his reading buddies, with Blessing in the background.

After passing the test and officially joining Canines 4 Christ, Zack and Schroyer began making regular rounds with their fellow teams.

“(We) go to malls, to community events, with our dogs in their vests. It’s ‘ministry of presence.’ We let the dogs do the talking in their vests — that’s making enough of a statement, usually, just to make our presence known,” she said.

Schroyer said they also work with children on teaching them canine safety: how to act around strange dogs, meet dogs in public and other things. 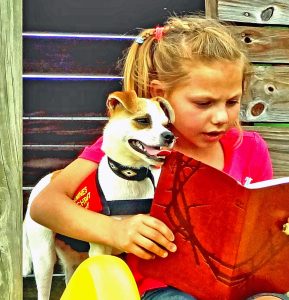 Photo submitted
Zaccheus listens as Kaylee Pendleton reads to him during a session of Reading Buddies.

“Some people pretty much deal with the elderly, some with children. Zack goes everywhere. He doesn’t care — young, old, on horseback,  on an ATV. We had a Christian motorcycle group come in at Triple Cross and Zack was right there in the middle,” she said. “He’s fine with it all.”

“We are busy, but we think this is a real important program,” she said.
Schroyer said she hopes to start taking Zack to the area 911 call centers and other places of high stress. She also hopes to see legislation be changed to allow Zack and other therapy dogs in the courtroom. Currently, Kentucky statutes only cover medical assistance dogs in courtrooms, therapy dogs are not allowed.

“Dogs can have an amazing effect in breaking down barriers and calming people,” she said. “We just try to bring some smiles.”

Another Canines 4 Christ program includes crisis response training. Schroyer said those trained can be called to travel. She and Lambert-Stava, who are both trained, are planning to do it only locally, at hospitals and trauma centers, which they have already visited. 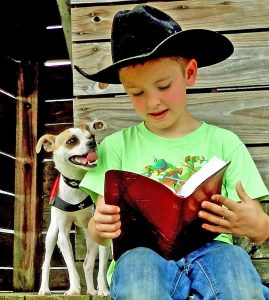 Photo submitted
Zaccheus listens as Hunter Wilham reads to him during a session of Reading Buddies.

When they aren’t going out with Canines 4 Christ, Schroyer and Zack live on her “homestead” in Willisburg.

“He’s got a miniature donkey, sheep, four milk goats, peacocks, two kitties and two big dogs that he plays with. He’s used to a lot of commotion. He’s pretty quiet when we’re out. But when we go home, I think he’s part Jack Russell, and that part tends to come out when we’re home,” she said with a smile.

Before moving to Willisburg, via Boyle County, Schroyer spent two years living in Ecuador. She was living in New Mexico when her husband passed away.

“We had talked about maybe retiring overseas, or somewhere, for a little while,” Schroyer said. “I did some research and I retired there.”

She lived in Ecuador for two years, doing mission work while she was there. She spent time working in sugar cane country with the Afro Ecuadorians, in the Andes volunteering, teaching children, in a soup kitchen, rescuing animals and more.

“The group I was working with there, they have since built an (animal) shelter,” Schroyer said. She even came home with one dog, Sammy, who only has three legs after having to have one amputated. 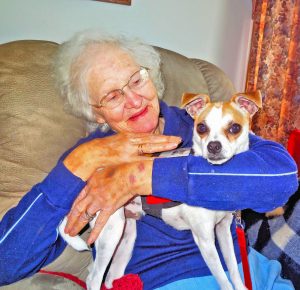 “He’s great on the farm,” she said. Overall, the time in Ecuador was a great experience. “It enriches the person much more than the people you are working with, in my opinion.”

She made friends there who remain her friends to this day, and have come to visit Schroyer since she moved to Kentucky.

The decision to move to central Kentucky was prompted by her daughter, who lives in Anderson County. Schroyer bought a place in Boyle County without seeing it. After some time, she moved to the Willisburg community to be closer to them and to get out of a floodplain.

“I like this area, I like the people,” she said of central Kentucky and Boyle County. “This is a wonderful place to live. It feels like home.”

To learn more about Canines 4 Christ or see videos of Zaccheus and friends in action, visit k9forchrist.org.