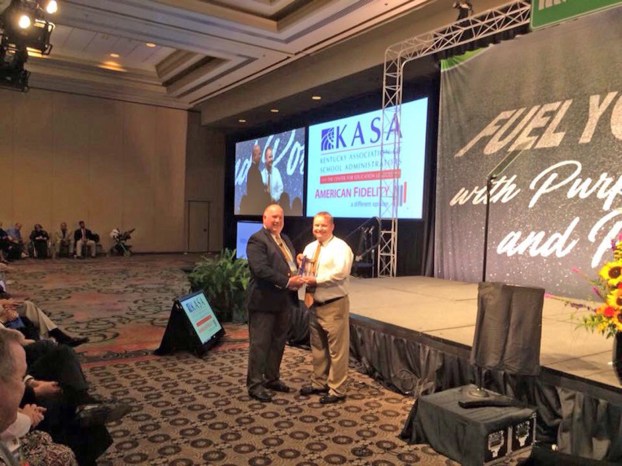 It was a surprise win for Kalem Grasham, former Garrard County High School Principal, who won the 2017 Kentucky Association of School Administrators School-Level Administrator of the Year award last week.

“I find it a great honor to be thought of to receive such a prestigious award,” Grasham said.

He said he literally found out as his name was read from the podium during the opening night of the Kentucky Association of School Administrators (KASA) Annual Leadership Institute on July 26, although the appearance of his family gave him some clues.

“I’m in the conference with 1,400 administrators and my wife starts sending me texts from in the room,” Grasham said.

He remembers thinking that was odd. Then he got another text from her with a photo of his mom and step dad, too.

“At that point, I figure something might be going on,” he said, starting to laugh.

As they began to read the description of the award-winner from the podium, it became increasingly obvious.

“When they read the description of the award winner, it fit the roles I’ve had,” he said.

Grasham didn’t even know he had been nominated, or that letters of recommendation had been gathered on his behalf, including one from an out-of-district administrator. 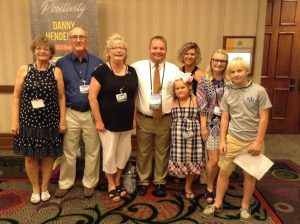 Photo submitted
Kalem Grasham, Garrard County director of Federal Programs, center, was awarded the 2017 Kentucky Association of School Administrators School-Level Administrator of the Year award last week for his work as the Garrard County High School principal. He was surprised by the award, and by his family who attended the event. They are, from left, his aunt Brenda Short, step dad Lewis Grider, mom Renee Grider, Grasham, wife Jessica Grasham, daughters Kassidy and Cheyenne Grasham and son Jake Grasham.

“It was an honor having my family up there,” he said.

The out-of-district administrator was Casey County High School Principal Joshua Blevins, according to a news release sent out by KASA.

“Mr. Grasham expresses a true desire for the students of Garrard County to excel in post-secondary endeavors and life,” Blevins wrote. “He has consistently impressed upon me that he is a dedicated educator, responsible man of integrity and a true leader.  He makes a positive difference and has always proven to be a professional who holds truly admirable qualities.”

“He works tirelessly to ensure every student and staff member has the knowledge, confidence and support to pursue their dreams,” she wrote. “If they encounter a bump in the road, Mr. Grasham is there to offer advice and a silly story to make them laugh. He leads each department in data-driven, professional learning community meetings and models the work ethic he expects from everyone.”

Grasham, who has been in education for 18 years, all in Garrard County, said it was important to note that while his name was on the award, it wasn’t about him at all.

“It’s about the ‘we.’ The honor is a reflection of all the hard work, dedication and commitment that we have accomplished over the past four years,” he said. “It’s not about me, it’s about ‘we.’”

Credit, Grasham said, needs to go to his administration team, for one, calling them “complete rockstars.”

“It’s a reflection of the culmination of the work, dedication and commitment we’ve put in at the high school.”

The team includes department chairs for the high school and they made a huge impact on students, he said.

“Our students knew we cared about them,” Grasham said. Beyond that, the community knew they cared and cared, too.

“It’s been a magical ride these four years,” he said.

Four years is how long Grasham has spent as the principal of the Garrard County High School, a position he left this summer to become the director of federal programs at the district level.

During the past four years, the Garrard County High School has gone from earning “needs improvement” status to “distinguished” status on state assessments, according to the release.

Grasham said he believes the award is also a reflection of the region, because administrators from so many districts work together to help their school succeed.

“I really feel like it’s an honor for our area, too. I’m deeply networked with the other principals in this area,” Grasham said. “We push ourselves to be the best we can across the board. When Garrard County is successful, we hope Lincoln County is successful, and Casey, Boyle and Mercer. We help each other out. We exchange ideas to help support one another.”

The City of Danville will be one of two pilot cities in Kentucky for a new historic preservation database project... read more