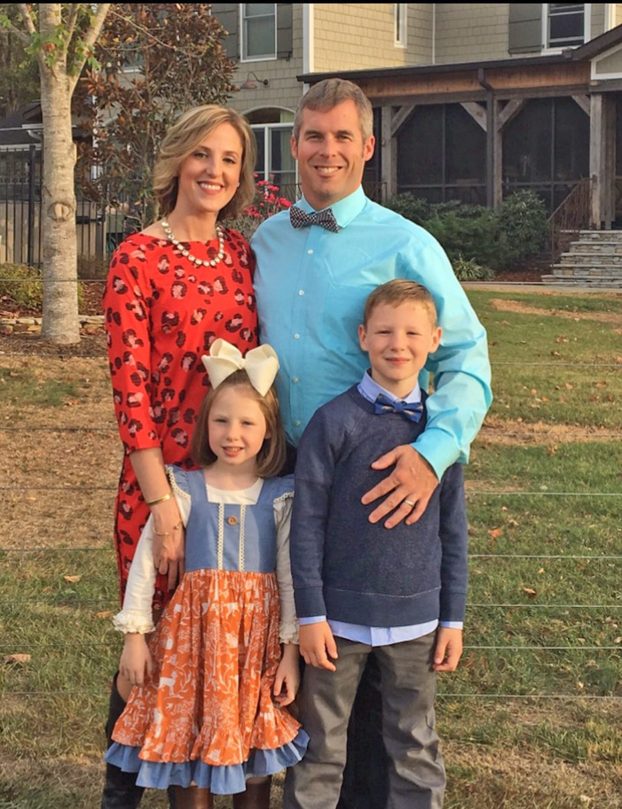 Photo submitted Diana Hart, top left, was named Garrard County High School principal. She has been the assistant principal at the school for four years. Hart resides in Lincoln with her husband Clayton, and children Stella Beth, 6, and Parker, 8.

Editor’s note: The article that ran in the print edition of The Advocate-Messenger stated that Hart was the first female principal in all Garrard County Schools. This has been updated to reflect her position as the first female principal at Garrard County High School. A correction will also run in Thursday’s edition of The Advocate-Messenger.

A face known to students and parents alike has taken the reigns at Garrard County High School as the new principal, the first time for a woman to be in the role of principal at the school.

“I think that’s really exciting,” said Diana Hart, Garrard County High School principal and former assistant principal. “It shows  that you can do anything you want to do. Hopefully it inspires the girls in this school to aspire to bigger things.”

Hart said her parents, especially her mom, were proud of the fact that she had taken the position.

“My family — mom and dad — are Polish. My mom is working on her citizenship. To her it’s super exciting because I’m a female and the principal,” she said, smiling.

Sometimes, Hart said, women who are strong leaders in schools don’t pursue the administrative roles because they are afraid they’d lose that connection with students.

“There are some strong leaders in our school — I’ve asked them if they would ever consider being an administrator … I think they take on that motherly role in classrooms and are afraid to left that go,” she said.

In fact, Hart said she struggled with the same thought initially, but has worked hard to maintain the connection to students.

“I’ve just made it a priority to get into classrooms as much as possible and try to get the know the kids so they feel comfortable with me so that never goes away,” she said.

And that’s an effort she plans to continue. Hart also wants teachers and students to not see her as the manager of the school but as an assistant to all of them.

“Teaching is a very stressful job. If you’re not in the classroom, you don’t really know how stressful. I want to be a support system for teachers in this building, so they know they have someone in this office that’s going to support them,” Hart said. “Same for kids — I hope they know my door’s always open to them, that I will help them in any way they need.”

Hart said she’s really excited, but knows she has big shoes to fill.

“Mr. Grasham is a rock star,” Hart said, bringing up that Grasham was awarded the 2017 Kentucky Association of School Administrators School-Level Administrator of the Year award last week. “It’s a little intimidating to follow in his lead.”

Hart was named principal a few weeks ago, but this will be the first full week she’s spent in the school. Last week, she spent a few days at the KASA Leadership Institute, a three-day conference for school administrators.

“It’s gets your battery charged,” she said.

This week, while busy getting students ready for school starting Aug. 9, has been a good one for Hart, she said. The biggest change so far is that she simply moved to a new office.

Although this is her first time in the role of principal, Hart said everyone at the school is like a second family, so she’s not too concerned.

She admitted it can be a “little overwhelming.”

“Everyone comes to you if they have a problem or if there is a question,” Hart said. “But I like that. I think I am a very approachable person, so I hope that continues.”

Hart started teaching chemistry at the Garrard County High School 10 years ago. It wasn’t exactly her plan to stay there the whole time, but she said, “You fall in love with this place once you get here.”

Hart resides in Lincoln County with her husband Clayton and two children, Parker, 8, and Stella Beth, 6.

Beyond all else, she said it’s important to thank everyone for their support of her over the years.

“They really, truly are supportive of each other here. That’s why Garrard is so special,” Hart said. “When you’re happy, you love your job and you keep a positive attitude, that trickles down to everybody.”

Danville police have located a white truck and its driver, who allegedly fled the scene of an injury wreck along the Danville... read more