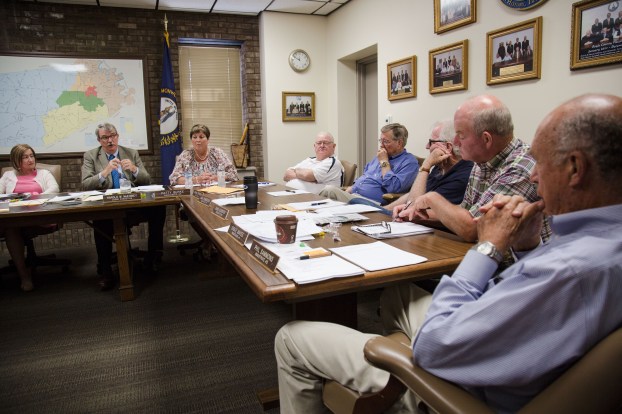 The realities of running an overcrowded jail are continuing to consume a substantial amount of time for the Boyle County Fiscal Court.

This Friday, the Joint Jail Committee — made up of members from Boyle and Mercer county governments — expects to spend three hours listening to proposals from companies interesting in working with the counties on an upgraded or new jail facility.

The “RFQ” (request for qualifications) presentations are scheduled at 1 p.m., 2 p.m. and 3 p.m. on Friday; each company will get 45 minutes to pitch themselves. The three companies presenting are Carter Goble Lee Companies (CGL); Brandstetter Carroll; and HDR Inc.

The company selected will help develop a plan for increasing capacity and potentially adding treatment beds at the Boyle County Detention Center. Such a plan could involve renovating the existing space, building on an addition or constructing an entirely new facility. Magistrates have said the cost of a new jail could run as high as $50 million.

Last week, Boyle County hosted consultants from the National Institute of Corrections, who will also be studying the jail situation and offering — free of charge — information on the best options available.

“I think it’s going to be a great help for us just to look at it in a statistical way,” Boyle County Judge-Executive Harold McKinney said recently.

Boyle County is also continuing to work with Mercer County on a possible renegotiation of how much each county pays for the jail’s operating costs. Currently, Mercer County is required to pay at least 35 percent of the jail expenses, even if its inmates represent less than 35 percent of the population. Mercer County’s percentage of inmates has been below the 35-percent mark for multiple years, and has dropped to an estimated 29 percent based on 2016 figures, according to officials.

At the most recent fiscal court meeting, Boyle County Treasurer Mary Conley said the county is doing some work gathering data on services Boyle County provides for the jail that Mercer doesn’t have to pay for.

“We will be putting together some estimates. Bill (Nichols, Boyle IT director,) is going to be providing us with information because he provides ancillary work for the jail facility that is not reflected in their financial statements,” Conley said. “As well as there’s the county treasurer’s time, as well as a little bit of the county judge’s time.”

Based on a plan agreed to at a recent joint meeting of both counties’ fiscal courts, that information will be given to Mercer County, which will then come back to Boyle County with a proposal to lower Mercer’s minimum payment.

“To put it in one ball of wax, they just want to see what it’s costing us on our side to help run the jail and to see if their request to lower that is a valid request,” Conley said.

Magistrate Phil Sammons said he thinks the joint meeting of the fiscal courts was helpful in enlightening Mercer County magistrates about the things Boyle County does for the jail that Mercer doesn’t have to worry about.

“At that meeting, I got the impression that there wasn’t a magistrate at that court that didn’t understand anything … they did not know or didn’t have any idea,” Sammons said.

“They can come back with a figure, but I think they’re getting a good deal,” Sammons said.

“You did a good job presenting it and I think the magistrates learned a lot — they indicated that,” Boyle Magistrate John Caywood said. “… The message was we need to have more (communication).”

“I did have some Mercer County magistrates take me aside and talk about it,” McKinney said.

“I agree with magistrates Sammons and Caywood — they (Mercer County) learned a lot, especially the magistrates,” Boyle Magistrate Jack Hendricks said. “They didn’t know a lot of that stuff.”

One way Boyle and Mercer counties are attempting to combat overcrowding at the jail is though their Shepherd’s House intensive outpatient (IOP) drug treatment program, which launched at the end of February.

Inmates who have struggled with substance abuse and qualify for the IOP program can be released from the jail while they participate. The program provides counseling and training and requires participants to work at a tax-paying job or work on community service projects. Officials have said the program is designed to reduce recidivism and help people who have suffered from drug abuse to find employment and improve their lives.

At the most recent fiscal court meeting, Boyle Magistrate Hendricks questioned why some of the IOP participants had failed drug screens and were still allowed to continue in the program.

“We’ve got a lot more people sitting up there in that jail obviously that we could put in this program, and if we’ve got people violating, I don’t understand why we’re giving them second, third chances, when this was supposed to be a pretty good chance they’re getting,” Hendricks said. “I thought our original plan was if somebody violated one time, they went back to their sentencing in the jail and we put somebody else in that really wanted to the program.”

“That wasn’t really the way it was. I hate to disagree with you,” Magistrate Sammons said. “The way I understood it — everybody needed a second chance.”

If all people released from the jail were sent back because of one failed drug screen, “it would just fill the jail even fuller than it is.”

“What they said is with addiction, it’s pretty common to have a slip-up or two. If somebody comes in and fails the first five drug screens off the bat, they’re going back to jail, or if they have a failed drug screen and some other things, they’re going back to jail,” Dean said. “If it’s one failed drug screen, what they’re doing is doing some more intense interventions at that point, maybe even sending them to an in-patient program at that point; some of them need some additional mental health services.

“Usually, we don’t hear about that first one or two failed drug screens. It’s if somebody is consistently breaking the rules, not participating, vs. being in a crisis that they can put some more interventions in place to help them be successful.”

“Well, the Shepherd’s House is very good at that, so that’s fine if that’s the way they need to do it. I just misunderstood how we were doing it,” Hendricks said.

Dean said if the Shepherd’s House does reach a point with a participant where they need to be sent back to the jail, usually an affidavit will be filed and her office takes it from there.

“I have been as a prosecutor taking a very hard stand. If we’ve given you that opportunity to do Shepherd’s House and you’ve failed to avail yourself of that opportunity, then you’re going to have to be in the Boyle County Detention Center,” Dean said. “Because not everybody gets that opportunity and there are plenty of people waiting to take your spot.”

“That’s kind of the way I look at it,” Hendricks agreed. “I understand one failure — that can happen, even two. And if the Shepherd’s House is on top of it, maybe they can prevent a third one. But at that point, when it gets three or more, I think we need to take a hard line on that, because we’ve got a lot of people that need this help. And we want to help them all the best we can, but if somebody just is not prevailing to the opportunity we’re giving them, sooner or later you’ve got to say, ‘enough is enough.’”