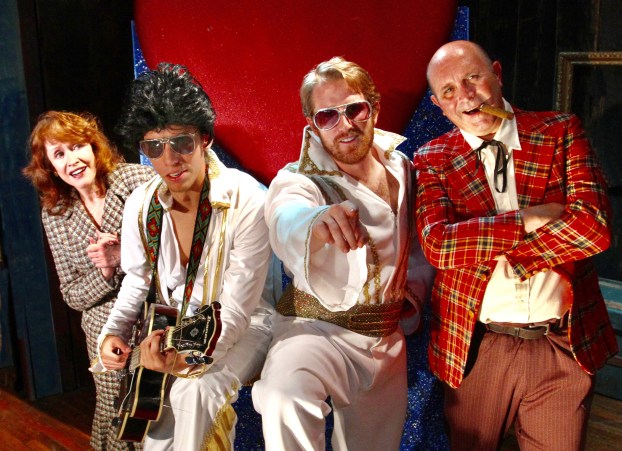 Looking for the King

Pioneer Playhouse finishes up its regular 2017 summer play season with “Elvis Has Left the Building,” a hilarious comedy by the mother-son duo, V. Cate and Duke Ernsberger, creators of such hits as “Dracula Bites” and “Don’t Cry for Me, Margaret Mitchell.”

It’s Dec. 20, 1970, and Elvis Presley has disappeared. No one, not even his wily manager, The Colonel, knows of his whereabouts. But the Colonel is all shook up because he has racked up a secret debt — and with the King himself missing, the only way to pay it off is to find an Elvis impersonator within 24 hours.

High jinks ensue as the Colonel takes desperate measures to replace a man who is irreplaceable, all while keeping the prying eyes of a nosy reporter at bay and figuring out what happened to the real Elvis. 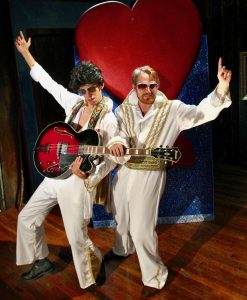 Dalton Graves as Roscoe and Liam McDermott as Candy.

“We’ve had a lot of success with this playwriting duo in the past,” says Robby Henson, artistic director of Pioneer Playhouse, and son of founder, Eben C. Henson. “Patrons still remember ‘Dracula Bites,’ still talk about how funny it was. And they still talk about how a few actors re-enacted all of ‘Gone with the Wind’ in a hilarious way on stage in ‘Don’t Cry for Me, Margaret Mitchell.’ We knew a play based on a kernel of truth — the day Elvis actually did disappear in 1970 — but taken into a totally fictional and ridiculously silly direction would really work at the Playhouse.” 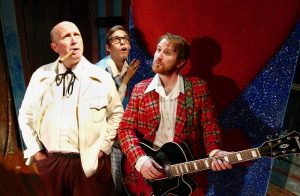 Robert Sean Parker  — who was last seen as numerous characters including the villain in “Baskerville: A Sherlock Holmes Mystery” — portrays The Colonel while Liam McDermott (Dr. Watson in the Sherlock Holmes play) and Dalton Graves (Dr. Mortimer and other characters) will be the Colonel’s associate and assistant who unwittingly get hypnotized into thinking they are actually the King. Rounding out the cast is Patricia Hammond as the Colonel’s long suffering secretary, and Erika S. Lee as a nosy reporter trying to get a scoop on Elvis’s true whereabouts.

J. Richey Nash, who starred as Sherlock Holmes in “Baskerville: A Sherlock Holmes Mystery,” is directing. Nash is a Kentucky native, son of legendary UK basketball player Cotton Nash,and also a former professional baseball player, playing for the Padres, Twins an White, who turned actor and filmmaker. His feature film, “Hitting the Cycle,” which he wrote, directed and starred in alongside veteran actor and Oscar nominee, Bruce Dern, won many awards including Best Dramatic Feature at the Manhattan Film Festival in New York City.

“Elvis Has Left the Building” opens Tuesday and runs 8:30 p.m. Tuesdays through Saturdays until Aug. 19.

A home-cooked dinner featuring hickory-smoked barbecued pulled pork or chicken, and farm-fresh sides is served at 7:30 p.m. each evening before the show — a vegetarian option is available if ordered 24 hours in advance. A bar serving wine, beer and mixed drinks will be open for those 21 and over. Reservations are recommended for the show, but are required for dinner. Dinner and a show is $32, while the show alone is $18. Pioneer Playhouse is located at 840 Stanford Road in Danville, Kentucky. Shows are held outside in a historic amphitheater but moved indoors in case of rain or extreme heat. For more information and for reservations, call the box office at (859) 236-2747, or visit www.pioneerplayhouse.com.

Although “Elvis Has Left the Building” is the last regular production of the season for Pioneer Playhouse, its popular comedy weekend will still return Aug. 24-26, featuring comedian Jimmy Walker.

KGAC to host Jazz Concert at the Lancaster Grand