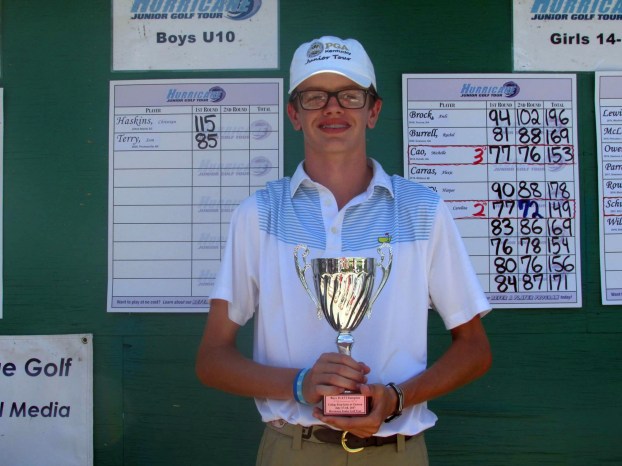 Colten Wilson has played tournament golf since he was seven years old.

Last month, he competed in his first tournament out of state. And he won his age group, finishing 11-over par at the Clemson University Golf Club.

“We’ve been wanting to try these tournaments for awhile, we found that one and it was on a perfect week,” Colten said. “We kind of like it around there so we wanted to try it and see.”

Colten said that his parents, Ray and Christy, were a big motivator for him to try a tournament out of state.

“It’s awesome. My dad and I, we usually do a ‘guy’s trip,’” Colten said. “He wanted to play an out-of-state tournament for me, and we chose Clemson. That’s what he wanted to do for the guy’s trip.”

The event was a part of the Hurricane Junior Golf Tour, which is based in Jacksonville, Florida.

Christy said that her son used to participate in Musselman-Kirchdorfer Golf Tour out of Louisville before trying something out of state.

Colten will play in two more Hurricane Junior Golf tournaments later this year, one in Tennessee in September and one in Louisville in October.

“It’s awesome,” Colten said about playing out of state. “You meet so many different people and a lot of good players.”

The atmosphere at an event is similar to a high-school event, Colten said.

“Some of (the golfers) are very serious but there’s others that are cool and hang out and talk to you, it’s really fun,” he said.

Colten doesn’t play any other sports for Boyle — golf is a year-around activity. But he enjoys being on the Rebels’ varsity team.

“We’ve got a good group of guys and I’m all friends with them,” he said. “I think going and playing high school tournaments, it’s just another tournament for me. It’s easier for me because I play in more tournaments, I feel more laid back.”

One of the big reasons for playing out of state is more exposure, Colten said. His goal is to play golf in college and beyond.

“I was just looking to kind of show I could play out of state and go different places and play,” he said. “… It’s really just to play good and get myself out there and hopefully some colleges will see me, hopefully play in college.”

Christy said she hopes that dedication pays off.

“He puts a lot of effort into his game and we hope it takes him wherever he wants to go,” she said.