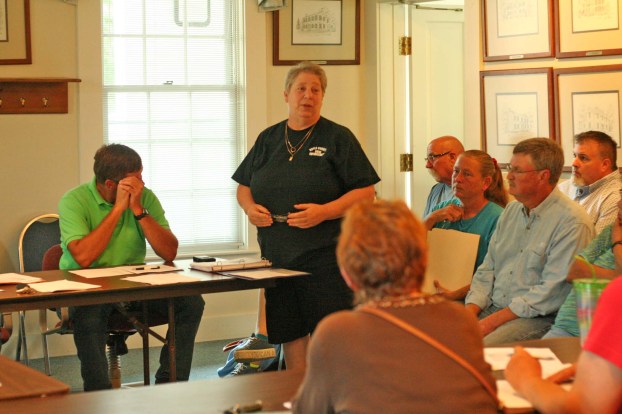 “Every five years, I come before you to discuss the five-year solid waste management plan … Through some of them, we’ve gotten some wonderful things done — one of them being the recycling that we have in Perryville now,” Fechter said.

Before the meeting, Fechter said the plan was “a very simple plan.”

“It’s not doing anything huge. The huge thing we’ve already done: In the last plan, we said we would see if we wanted curbside recycling countywide, and we did that,” she said. “We’re always looking at different things to do.”

There are a few different, little changes, in the new plan, she said.

She explained that the plan provides area designations: the cities of Danville, Junction City and Perryville and then those who don’t fall within a city are under Boyle County.

There are eight sections in the plan, Fechter explained, dealing with litter, recycling, disposal, collection, finances, and others.

“We look at specific actions we take for our weaknesses, or we look at things we do really well,” she said.

Every year, she said, they look at the ordinances the areas have and review whether or not they need to be brought up to date.

She honed in on the specifics of Perryville, complementing the city on recycling measures.

Recycling door-to-door, she said, will continue as long as the city of Perryville would like it, calling it one of the city’s strengths. Other strengths include curbside solid waste door-to-door, and the convenience center for bulky waste.

A litter abatement grant of about $3,000 is earned by the city every year, Fechter said, which is signed over to solid waste, allowing the department to come at least three times a year to pick up any litter on the city’s streets.

Signing that money over, she said, gives the city the “best bang for your buck” to ensure that litter is picked up, and trash pick-up is provided for all of the city’s festivals.

“I’m here to help you if you should ever need me,” Fechter said.

She encouraged the city officials to come to her with open dumps in Perryville. While the solid waste department can’t enter private property to clean up those dumps, she said they can pick up the garbage if it’s brought to the road.

“We do what we can to help them,” Fechter said. Dumpsters are sometimes available, too. “We will help anybody if they will work with us.”

The solid waste budget for the whole county is about $2.46 million in all.

Fechter said people sometimes get upset when asked for their licenses while taking garbage to the convenience centers. Boyle is the only county that is free, which becomes enticing for people from other counties, she said.

“We can’t ask people of Boyle County to pay for Lincoln, Garrard, Mercer and other county residents,” she said.

The 2018-2022 plan has been available for the past six weeks for review, Fechter told the council. It was accepted at Perryville’s meeting, and will be taken to the Junction City Council meeting on Thursday, the Danville City Commission meeting on Aug. 14 and the Boyle County Fiscal Court meeting on Aug. 22.

Taxpayers in Perryville are expected to see a rate increase in their real and personal property tax rates, while the... read more