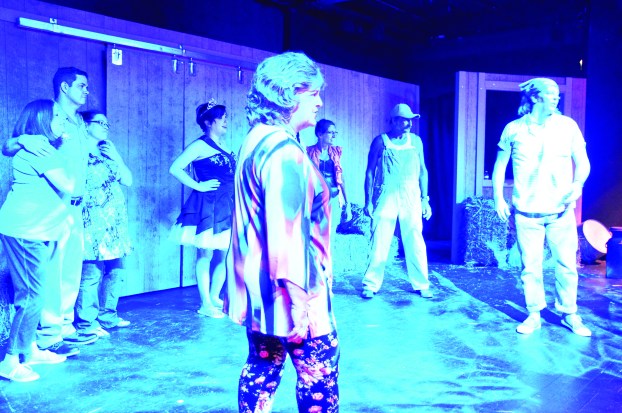 (Bobbie Curd/bcurd@amnews.com) Above, the cast of “Babe Dean and the Great Eclipse” rehearse a scene in a special blue-light effect Tuesday at the theater. They are, from left, Jesslyn Newhall, Allen Martin, Caren Lamblin, Katie Followell, Karen Logue, Mary Anne Matthews, Buck Rogers and Mike Archer.

Looking into the light of laughter: Babe Dean returns to West T. Hill to take over the solar eclipse

When local playwright Elizabeth Orndorff read an article last fall about how the eclipse was transforming little Hopkinsville in Christian County, she knew it was the perfect set-up for Babe Dean and her gang.

“They are, after all, masters at taking people and events and turning them to their advantage,” she says. Thus, “Babe Dean and the Great Eclipse” was born. The fourth installment to the “Hollerwood” series takes audiences back to Random, Kentucky, where a group of “faux hillbillies” look to make a killing off of the eclipse, even if they have to fake an eclipse to do it. 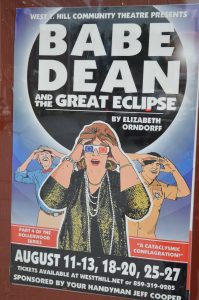 Along the way, Orndorff says, everyone is falling in love — or at least in lust — with everyone else, and Sheriff Jerry Peavler suspects this is caused by the coming solar eclipse.

“The characters of Random are very definite personalities, so all I have to do is put them in a certain situation and watch them work. And the test that it’s working is if I am laughing outloud while I write,” Orndorff says. “And I laughed a lot with this one.”

On Tuesday night at West T. Hill Theatre, the cast was also laughing — a lot. It’s easy to see the chemistry in motion with this group. Several of the actors have been along for the entire ride, since the first “Hollerwood” play came out years ago.

“Using established characters in a series of plays is actually pretty easy. Also, if they are all kind of tetchous and dauncy …” she explains this is an old Kentucky expression, “…then you have a bunch of nuts trying to outdo each other. All you have to do is throw obstacles at them and watch them react.” 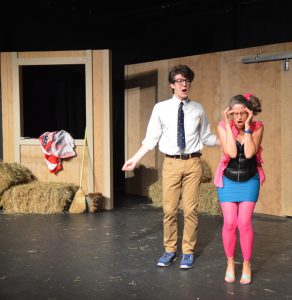 “I really never thought Babe was dead because I kept bringing her out of the closet for costume parties …” says Karen Logue, who is managing director of the theater and plays Babe Dean. “But I was surprised, after doing a trilogy, that Liz decided to bring her out again. When she asked me, first thing I said was ‘Only if Allen (Martin) will play Jerry …”

“That was my first question: Is Karen going to be in it…” Martin says. “I probably have a top five list of people who I’ve ever been on stage with and will always choose to act with, and three of them were originally cast in this show (one had to drop out),” Martin says. “So yes, there’s definitely a chemistry.”

“And it’s amazing how all these eclipse stories are hitting the news, this piece is so relevant,” Logue says.

The story goes like this: Fred (played by Dale Kihlman) is left by his wife Bertie (played by Mary Anne Matthews) due to “a lack of intellectual stimulation.” Fred takes up with a teenaged babysitter (played by Katie Followell) to get back at her. Sheriff Peavler is worried about House Bill 143 (we’ll save that for the play to reveal ….) and Babe Dean (played by Karen Logue) falls for a singer young enough to be her son, Mike (played by Mike Archer). Add five more actors actors, and Orndorff says, “When you have a cast of 10, then the interactions are innumerable and fun.” 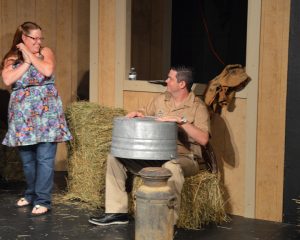 Orndorff went back to the original actors she’d worked with, and all but one could return. Although one veteran Random actress had to drop out of the production, she was able to go back to the list of those who’d held minor roles in Hollerwood before to find a replacement.

Rounding out the cast is Buck Rogers (as Lance), Caren Lamblin (as Yerhandy), and Jan Sheffield and Jesslyn Newhall share playing Mae Jepperson. “Jan plays Mae the first two weekends, then Jesslynn will move into the role for the final weekend. So, come twice and see them both!” Orndorff says.

“Hardest to cast was the young science teacher — now played by Jacob Johns — who is cougar-bait for Bertie. Who knew that young men in Danville are so busy,” Orndorff says. And she knew she wanted Archer, a local musician, from the beginning. “If you are a fan of Mike’s, you’ll want to see him in his acting debut, plus some original tunes by him.”

Sure, there is something in every character that people can relate to, Orndorff says — definitely. “They are just a little over the top, they have no shame, and they tell it like it is. They are larger than life, but in a sweet way. And every one of them is likable. I think audiences will enjoy seeing what happens to these characters. And even if it isn’t what we would do, it is at least absolutely hilarious. Laughs are good for the soul.” 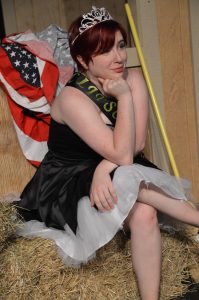 Orndorff says a good friend of hers, Joanie Lukins, is going “whole-hog for the eclipse experience.” She says Lukins and a group of friends are going to see “Babe Dean,” then on the day of the eclipse — Aug. 21 — the group will be drive toward Hopkinsville to see how close they can get to the center of totality, even if it’s along-side the road in bumper-to-bumper traffic.

“I hope others get into the spirit by having eclipse parties and, of course, coming to see the play.” WTH is hoping to sell out all three weekends, and Orndorff says they feel like this will happen.

“This is the funniest play I’ve ever written or directed, and what makes it funny is this incredible cast risking their dignity — and everything else — for the glory of Random.” 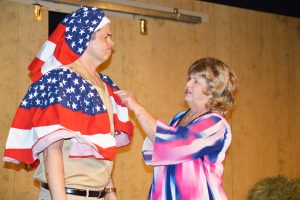 “Such funny and crazy people to work with,” Logue says. “And they’re very dear to me.”

“I will say this …” Martin says. “It’s not Shakespeare or Neil Simon. This is one of those comedies where you can completely decompress and lose yourself into ridiculousness. Just come, and get ready for some real out-there-comedy. Just have fun. We are.”