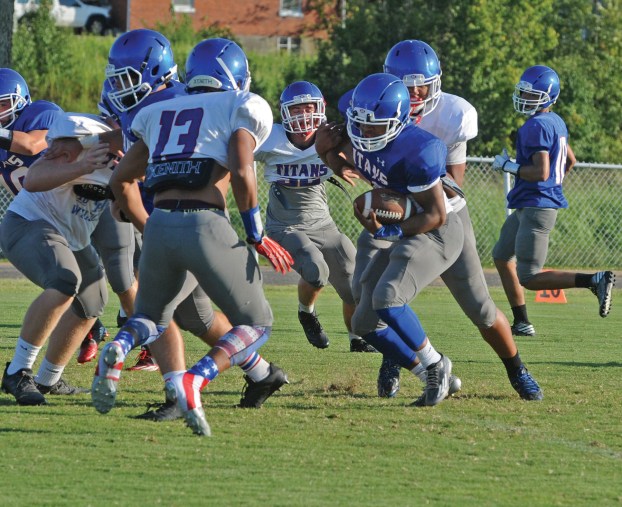 HARRODSBURG — Mercer County is less than two weeks away from its first football game of the season.

Coach David Buchanan said Friday’s team scrimmage was rough on the outside but believes the pieces are there to have a strong season.

The Titans lost key contributors on both sides of the ball — notably at the skill positions on offense. D Smith, Grayson Blevins, Dustin Baker and Tanner Robins accounted for 37 touchdowns last season.

This week marked the first week Faulkner has been practicing due to AAU basketball this summer.

“He’s a great player. He’s really brought a lot of energy to our practice this week,” Buchanan said.

Faulkner caught a touchdown pass early in the scrimmage and Buchanan said the execution was off but he liked the result.

“That was the best bad play I’ve ever seen,” he said. “But 99 percent of the time (Faulkner) does the right thing. He’s only been out for a week but he does a great job. I wouldn’t trade him for anything.”

Gillis will lead the offense again this year.

“He’s doing a good job, again, everything is just rough right now,” Buchanan said. “We’ve got to practice. We’ve still got a lot of practicing to do.”

The Titans open their season Aug. 19 against Harrison County in the Little Caesars Fort Harrod Bowl.