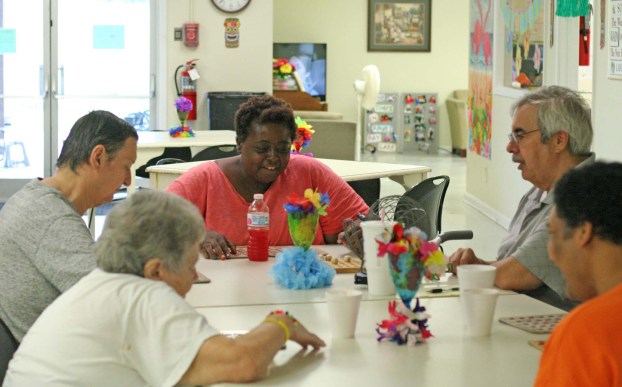 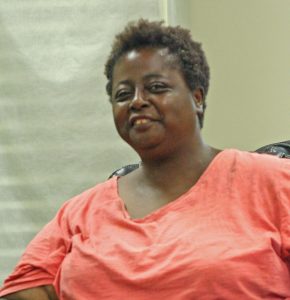 She can rattle off numbers like a whiz, remembering birthdays, phone numbers and other dates of importance.

That’s one of the many sides to Michelle Clark, of Danville, a regular at the Boyle County Senior Citizens Adult Day Care who enjoys coming because the staff is “really nice.”

“They help me,” she said. Some of the things she said they’ve worked on is helping her lose weight, watch her diet and cut back on her soda intake — she’s down to one a day. They’re also working with her on keeping her blood sugar and blood pressure down, and on her budget and money habits.

Coming to the center has made a big difference, and she likes being able to get out. “I don’t have to stay at home, looking at four walls,” Clark said. She isn’t a senior, only 41, and has been going to the center since 2012.

Clients don’t have to be senior citizens, explained Anita Pike, Adult Daycare director, they just have to be over 21 and have a doctor’s order to attend. There are an average of 15-18 who attend each day. Many of the clients are on Medicaid waivers, said center Director Ben Guerrant.

Over the years, they have had clients with down syndrome, who have had strokes or Parkinson’s Disease, who have dealt with mental issues, head injuries, or developmental delays, Pike explained. Some, she said, had issues that remained diagnosed but still impacted their daily lives.

“We are able to provide care to, really, anybody,” he said. “We can take insurance and we do take private pay clients, as well. We are a little-known resource in the community for people who are caregivers.”

Pike said the center is considered a medical facility and is inspected by the state for licensing. “We can provide care just like a nursing home does, but everyone goes home at night,” she said.

If one client is attending the Adult Day Care program, Guerrant said, there’s an Licensed Practical Nurse (LPN) at the center.

Most of all, Pike said, the center is a “home away from home” for its clients. In the nearly five years Clark’s been attending, the staff and her fellow attendees have become more than just people she sees every week. They’ve become family. She doesn’t have a lot of family in the area, a few distant cousins and a friend she calls her sister. She’s not alone in that, many of the clients don’t have family, Pike said.

“For some, we’re all they’ve got,” Pike said. “They look out for each other. They’re one big family.”

Things are going so well for Clark, she’s even going to get a small dog, something she’s wanted to be able to do for a long while. “I like dogs and puppies,” she said, smiling.

Clark enjoys going on the trips, she said, listing some of the places they’ve been, such as the movies, shopping, Cumberland Falls and Perryville Battlefield.

Clark’s favorite was when they went on a train ride, in Stearns, Kentucky. “We went on the train July 13, 2017. It was a Thursday,” she said, matter-of-factly. Making a motion of pulling a horn or whistle, Clark said that was her favorite trip, and that she liked the whistle.

Pike and Guerrant explained they do their best to generate sponsorships so no one has to pay for the trip. If a cost is associated with a trip, they give clients a heads up to prepare.

“A lot of the people we serve fall below the poverty line,” Guerrant said.

At the center, when they don’t go on trips they start days with a little exercise in the mornings. Then they have Reality Orientation — which Pike explained is giving clients a chance to catch up what has happened since the day before and discussing what day it is to keep everyone on top of things.

Everyone gets breakfast, lunch and an afternoon snack, paid for by the United States Department of Agriculture’s Child and Adult Care Food Program. They also have activities, like games of karaoke, name that tune, corn hole, badminton  and dancing, as well as crafts.

“Even if they don’t like the games, there’s always someone to talk to,” Pike said. “We have fun. We do fun things, we don’t just sit.”

Nodding with a sly grin, Clark said her favorite is dancing, especially to the song “Watch Me,” more commonly known for its dance called The Whip/Nae Nae.

“She just likes to dance,” Pike said, as Clark mentioned more of her favorites: “Macarena,” “Electric Slide,” “Cupid Shuffle,” to name a few.

On holidays, they do special events, such as a Thanksgiving dinner, an Easter egg hunt, and bringing Santa to visit at Christmas. Guerrant said they were also able to give all of the clients everything on their wish list at Christmas thanks to an anonymous group that sponsored and purchased every item.

“We thought they might get one or two from each list, but they bought everything,” he said. “There was a pile under the Christmas tree.”

Guerrant said other activities at the center have included water balloon fights, watermelon seed spitting contests and even throwing pies at his face.

Clark didn’t throw a pie at him. With a big smile, she said she walked right up and “smushed” it in.

Three people were arrested Friday night after a drug transaction was observed by a Boyle County Sheriff’s Deputy in the... read more