Looking Back: Blind tigers in Danville

Danville police were kept busy in the late 1800s and early 1900s with arrests of local people who sold booze illegally during prohibition in their homes, known as “blind tigers.”

Many of the offenders, both black and white, were arrested numerous times and many were convicted in Federal Court in Frankfort. They paid their fines or went to the “workhouse” to serve sentences, and when they got out, they started all over.

There are 1,699 articles in the Danville newspapers about arrests and killings that were related to blind tigers.

The newspaper articles showed several people, including a police officer, were killed after fights and shootings in blind tigers.

Office John T. Crum was shot when he attempted to issue a warrant on Reuben Quinn at his operation on Walnut Street April 10, 1901.

Crum apparently was warned not to go alone to the blind tiger. Quinn was referred to as a “dangerous and desperate man.”

Quinn fled the scene. He was arrested three days later on a train between Georgetown and Ludlow.

He was convicted of murder 10 days later and the jury recommended the death penalty. Quinn was hanged Dec. 20 in the courthouse yard.

Kitty Bell Farris Weatherford, who ran a restaurant and boarding house on Second Street in 1895, moved her operation to Stanford Avenue in 1920. She was one of several women who were allegedly selling whiskey. She appealed her charges many times, but usually paid a fine.

Kitty was born in 1877 and was married to Henry Weatherford. They had a daughter, Elizabeth, before he died in 1921. She married John Crowdus in 1922 and he died two years later, according to information in The Advocate.

Danville officers arrested 15 blind tiger operators and said it was “only the beginning of a war to be waged by officers upon the nefarious business in this city.

“Not withstanding the fact that stiff fines are often assessed, these people persist in selling liquor. “

Officers said the illegal selling of liquor can be stopped and have made plans so well laid that every guilty party will be nabbed within the next few days.

“The old town has been lousy with drunks for the past three weeks and the officers have been very alert endeavoring to locate the source of the “bug juice” that has been hurling the local citizenry from the water wagon,” according to articles in the Advocate.

“Detectives have been put to work and a number of arrests are expected soon. Some are said to be among the white people as well as among the colored.”

Chief Wood and night policemen Moore and Dunn made a raid on Second Street Saturday afternoon and captured alleged offenders.

Arrested along with Kitty are Hettie Burdette, Eva Wickliffe and Mamie Wilson, all colored. Kitty and Hettie are old offenders and have been in court often.

The others are recent recruits to the “blind tiger” brigade.

“Another big raid is said to be brewing.’’

Blind tigers apparently flourished in Danville because of the “great demand for booze”, according to an article in August 1912. During a raid earlier, 19 people were arrested and more arrests were expected.

One of those arrested was called an “old violator,” who is said to have bought a touring car and bluegrass farm, supposedly with money from his “liquor emporium.”

A freight receipt showed 16 barrels of whiskey had been ordered and brought in during a three-week period.

In March 1916, Deputy Marshal Charles Winfrey and Police Chief George Thurmond took 15 prisoners to Frankfort to be tried in Federal Court. Most were from Danville and facing prosecution on violating the local option law.

“A genuine awaking is needed in this community,” it stated.

The blind tigers were apparently an organized group, according to an article in September 1912.

It seems that after a raid, the price of whiskey is hiked. A half pint was 35 cents in recent years, then went up to 40 cents. “After a heavy raid, the price jumped up 5 cents on a half pint.”

The price change was noticed when 17 operators were convicted during a two-week period. One of those convicted sold 16 barrels of liquor in three weeks. Price per gallon was $6.40, more than double the cost.

“These blind tigers could not flourish without customers,” an article stated in 1912 after 19 were arrested.

“It is a foregone conclusion that there is a big demand for booze in Danville.”

It is estimated that one of the operators is making at least $300 per month.

Most of the illegal booze arrived by train. Days before Christmas in December 1910, police seized 15 gallons of liquor.

An item in September 1903, stated Carrie Nation was coming to Danville for a visit. Nation, a leader in the Temperance League, was known for her escapades smashing bars.

”Won’t she have a picnic smashing blind tigers if she strikes Danville?” 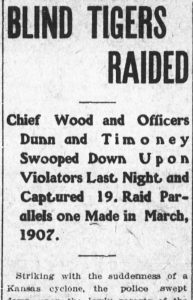 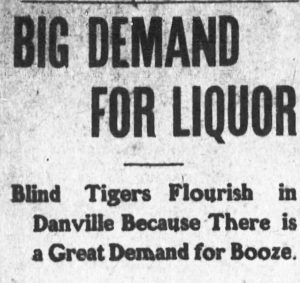 BY JERRY SAMPSON Question: What would my Victorian beetle pendant be worth? It’s small and is a little larger than... read more