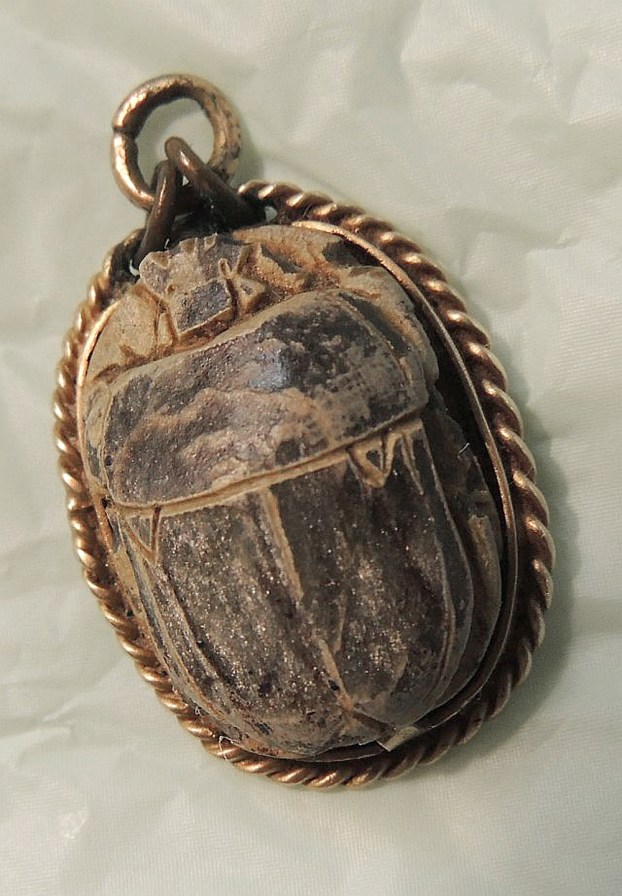 Question: What would my Victorian beetle pendant be worth? It’s small and is a little larger than a dime. It’s very worn and has some type of marking on the back and it has a mark for 10kt gold. I was told it could date to the Civil War era. Any light you can shed on it would be appreciated. Thank you! 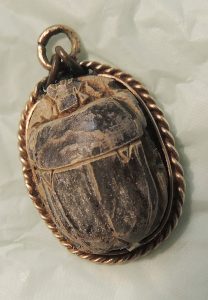 Answer: I think you were told wrong on this. You’re way off on the dates, in more ways than one.

Before we start, thank you for so many good, clean photographs. They made it much easier in answering your question.

Looking at that gorgeous handmade mounting, I’m thinking that it could date to the 1830s if not earlier. It’s hard to tell where the mounting is from. I get a feel from the quality of it, that it’s English.

Now the scarab beetle is another matter. It’s pottery, a type of glazed pottery that’s called faience. Faience is a type of tin glazed buff colored earthenware that was and still is manufactured all over the world. It was that blue glaze that tipped me off. The majority of scarabs were glazed either blue or green.

This beetle dates to around 2000 BCE that’s roughly the Egyptian Middle Kingdom period. Scarab beetles were used as amulets for good luck and good health. The backs of these beetles would have been carved with hieroglyphs.

Sorry, but I just can’t translate your hieroglyphs, mainly because I can’t read them and parts of them are covered by the mounting.

Later scarabs were used as offerings in mummies, placed in the folds of the linen wrappings. 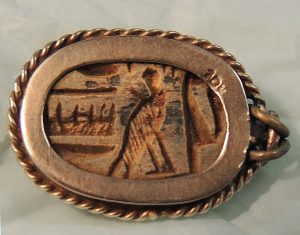 The scarab you have has a hole on either end. This was so that it could be mounted, originally, in a ring. The beetle could be swiveled to either side, depending on which side the wearer wanted or needed to face upwards. This created a type of impression seal that could be used like a sealing wax ring would be used today.

The piece you have is old, ancient, in fact but they are fairly common. There was a time that looting and pillaging was rife in Egypt. A lot of this happened in the 19th Century. So there are lots of examples out there.

I would expect that this very pretty example, at an antique jewelry store or show to be priced at about $150. What a great piece. Thanks for sharing it.