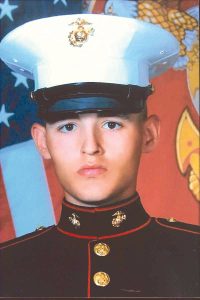 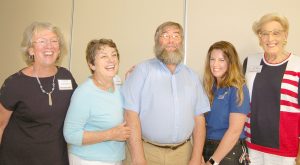 Garden Club of Danville members are happy about their participation in the Danville Tree Project. At the club’s August meeting Alexis Amorese, Boyle County Extension Agent for Horticulture, and Centre Professor Beau Weston presented an update on the project.
Amorese showed pictures of the tree varieties chosen and discussed their virtues. The idea was initiated by Weston as a 10-year plan to plant 500 trees along Danville streets, with an emphasis on native trees. With a matching grant from Kentucky Utilities and contributions from many individuals and community organizations, 150 trees have been planted in the past three years. The Garden Club of Danville has been the largest financial contributor to the project. Trees suited to high-traffic streets are selected by Amorese, then planted and maintained by the City of Danville. This winter 25 tulip poplars, Kentucky’s state tree, will be planted to celebrate the 225th anniversary of Kentucky’s statehood. For information about the Tree Project or to make a contribution, contact Beau Weston at Weston@centre.edu. 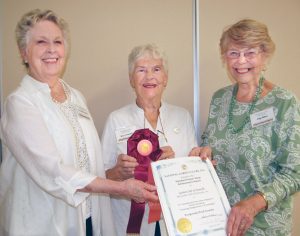 At the annual convention of National Garden Clubs, the Garden Club of Danville received an Achievement Award for its Standard Flower Show held at the Boyle County Public Library in May, 2016. Gigi Biles, right,  Blue Grass District Director, presented the award to club president Pat Boatwright, left, and Kay Arnold, Flower Show Chair. A Standard Flower Show is one that conforms to standards set by National Garden Clubs, Inc., with which the Danville Club is affiliated. Months of preparation and hard work went into planning and producing the successful show, which was open to the public. Almost all members of the club participated, either by designing floral arrangements, exhibiting horticulture, or assisting with production of the show. 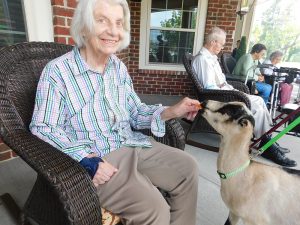 While goats in pajamas and “goat yoga” are becoming all the internet craze, Morning Pointe of Danville residents embrace these “kids” in a different way.

The seniors met Neera the goat from Kryder Family Farm, enjoying “goat therapy” as they fed her circus peanuts.
Morning Pointe invites shelters, zoos and pet owners to bring their furry and four-legged friends to the personal care and Alzheimer’s memory care community, bringing along the many benefits pet therapy one cuddle at a time.
You Might Like