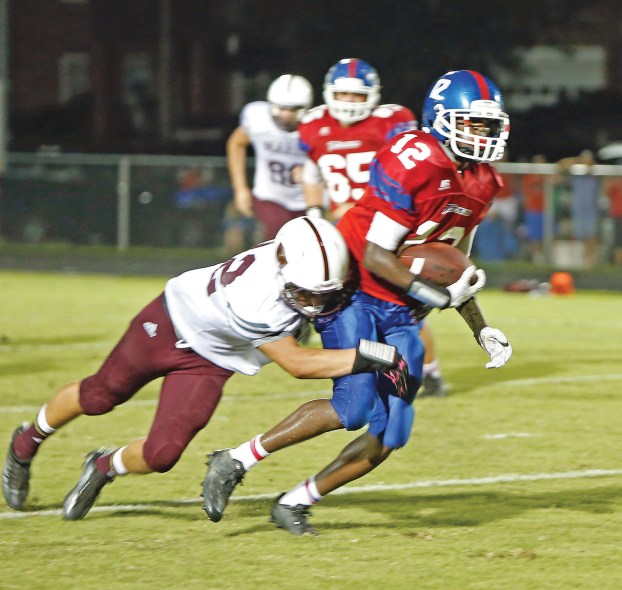 Trevon Faulkner is happy to be back on the football field.

The Mercer County two-sport star is a favorite for Mr. Basketball and will be one of the top playmakers on the gridiron in Class 4A.

“He’s not only a really, really good player. He’s an exceptional kid, a great person,” Hamlin said. “He’s one of the most hard-working kids I’ve ever been around. If you were around him, you’d never guess he was a Mr. Basketball candidate. The way he handles himself, the way he goes about his business — he doesn’t want all of the attention. That’s why this college thing is unique for him. He just wants to go out and play football and basketball, hang out with his friends and at the end of the day make a decision.

“It’s unique when you get a kid that is as talented and humble as he is. That’s what I take away from it. He works hard for everything he gets, and he deserves it.”

Faulkner recently finished his AAU basketball season with 22 Vision on the Adidas Uprising circuit, where he played with Romeo Langford, one of the top guards in the country. Langford holds offers from the top college basketball teams in the country — Kentucky, Duke, North Carolina, Michigan State, Louisville — but that only helped Faulkner. 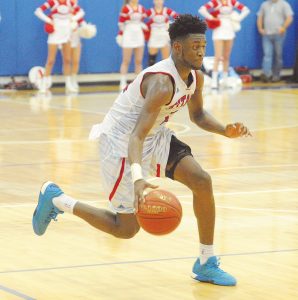 “It was really fun; playing with Romeo was nice and we had a lot of college coaches come and watch us play,” Faulkner said. “It was a fun season and it was fun showing everyone what I could do.”

Faulkner finished as the second-leading scorer for 22 Vision, averaging just under 13 points per game. He led the team in assists and steals.

“The talent is a big difference,” Faulkner said. “Here in Kentucky is pretty good, but it’s crazy the way other guys play — and they’re tall, too. You just have the mindset to come in and play every game, because you know a lot of people are watching.”

Hamlin said that Faulkner is up to nine scholarship offers, most recently from Valparaiso. In-state, he has D-1 offers from Western Kentucky and Northern Kentucky.

On the football field, Faulkner could receive more interest this fall. But he’s focused on winning games and playing his best for the Titans.

Mercer football coach David Buchanan said Faulkner’s impact was immediate when he joined the team after his AAU circuit finished.

“He’s a natural leader,” Buchanan said. “He’s comfortable being more vocal and directing things. We try to get our guys to talk and they struggle doing that, but he doesn’t. He helps guys get in the right spot; he encourages people and he does it on his own. There’s a lot of things that he does that makes us a better team that don’t have to do with how good of an athlete he is. He’s just a naturally good leader, and he’s good with his teammates.”

Hamlin added to that, saying Faulkner learned from some of the best leaders to ever come through the Mercer basketball program.

“It’s really — again, I use the word unique. As a freshman, you could tell how good of a player, how great of a player he’d be,” Hamlin said. “He deferred leadership when he was a freshmen to guys like Will Hager, Drew Davis. Those kids who had a monumental impact on the program. So he didn’t have to be a vocal leader; he could lead by his play on the floor. Sophomore year and junior year especially, he’s really started to be a more vocal leader. It’s unique that you get a kid that is your best player and also a natural-born leader. You don’t have to get him to fix it. If something’s going wrong in practice or a game, he fixes it. That’s just rare.”

Faulkner’s great on both sides of the ball — in both sports — but in football, he said he prefers safety to wide receiver.

He played in just nine games with the football team last season but had five touchdown receptions and led the team with seven interceptions. Buchanan said he does the work of two players in the back of his defense.

“He’s a great offensive weapon, but what he can do at safety — we’re a two-safety defense because of him, but it’s just him,” Buchanan said. “The impact he makes on our defense is huge. That’s our priority now. We’re still going to use him offensively; he’s still a great weapon, but the priority is him at free safety.”

Hamlin said it’s the way Faulkner sees the game — in both sports — that sets him apart.

“He really understands the game on the next level,” Hamlin said. “He will sit down and see a pick-and-roll coverage before it’s even there. That’s special. That’s what makes him the player he is and a Mr. Basketball candidate.”

Some people might say playing football when you’re a Mr. Basketball candidate is risky, but Buchanan and Hamlin don’t see it that way. Both coaches agreed that the skills gained from one sport help the other.

“I think specialization is awful. I think it’s an adult-driven concept and I think the kids are better off when they play multiple sports,” Buchanan said. “I think they develop different skill sets. The skills that Trevon uses in basketball make him a much better football player, and the physicality of football helps him in basketball.”

“Being able to have an athlete like Trevon is special, and he should be shared,” Hamlin said. “He’s just as talented on the football field as he is on the basketball court. We want our kids to enjoy their high school time.

“I’m not going to lie, I do get a little nervous watching sometimes. If he catches a pass, I’m like, ‘Trevon just go down.’ But I don’t want him to look back and wish that he had played on Friday nights. I can’t wait to watch him play. Hopefully they get some big leads and they get him out of the game. He’s just a natural at everything he does.”

HARRODSBURG — Mercer County is less than two weeks away from its first football game of the season. Coach David... read more