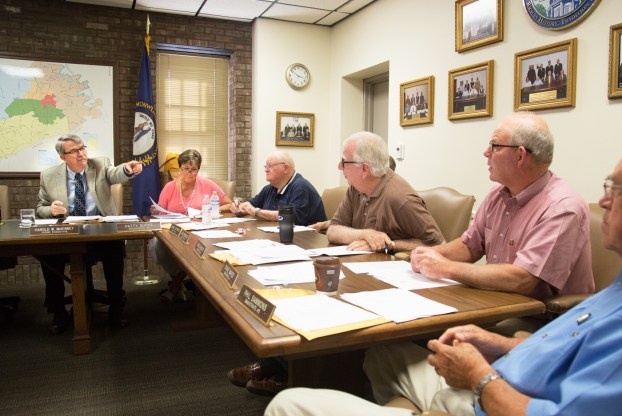 Boyle hopes to answer questions about 911 funding with special meeting

Boyle County doesn’t yet have an answer on whether it will — or can — hand over around $700,000 it has in 911-earmarked funds to the City of Danville. But the fiscal court is planning a special called meeting in late August, at which time Judge-Executive Harold McKinney says he intends to have answers to a myriad of questions from magistrates.
McKinney said 10 a.m. Aug. 29 is the earliest date that works well, because that’s after county officials return from a conference and Boyle County Emergency Management Director Mike Wilder returns from vacation.
“All the (Danville City) Commissioners and everybody is going to be invited?” Magistrate John Caywood asked.
“It will be a formal meeting of the Boyle County Fiscal Court,” McKinney said.
“OK, but the commissioners will be invited?” Caywood asked again.
“They’re welcome to come and watch,” McKinney said.
Magistrate Jack Hendricks soon pushed to have the city attend as well.
“I know it’s going to be a meeting of Boyle County Fiscal Court, but I really think we have to have some input from the people from the 911 center, as well as the city,” Hendricks said. “I think (Danville Police Chief) Tony Gray should be invited, I think (Danville City Manager) Ron Scott, the commissioners … I think a specific invitation ought to go to these people to be here and allow them to have some input or we’re spinning our wheels.
“We can’t make all the decisions about 911 without them being involved because it’s their operation.”
“This isn’t my first rodeo,” McKinney said.
“I understand that,” Hendricks responded.
“I’ll have them here,” McKinney said.
“I just think that we need to make sure they’re here and if they need to have input as to what’s going on, because it is their operation, not ours,” Hendricks said.
“Everybody is going to have an opportunity to speak,” McKinney said. “We’re going to take some time with this.”
“I agree with Jack (Hendricks),” Magistrate Phil Sammons said. “I think we need to have the heads of each department — like the fire department and EMS and the sheriff’s department and everybody.”
“That’s why we’re having a special meeting,” McKinney said. “So those people can come in and stand at the podium.”
Ongoing 911 funding issue
Who funds the local 911 dispatch center and how much each entity pays has become a major topic of debate between Danville and Boyle County officials in recent months.
Danville currently operates the dispatch center that services all of Boyle County, including Danville, Junction City, Perryville and the unincorporated portions of the county. But the Boyle County Fiscal Court, not the city, is currently the entity that receives 911-earmarked revenues. The county collects a local monthly fee of 50 cents per landline telephone; and it also receives quarterly distributions from the state of 911 fees collected on cell phone bills.
The county has banked substantial amounts of those 911 funds over time, resulting in the estimated $700,000 balance of unused funds that can only be used to provide or upgrade 911 service.
The city and county both passed budgets this year that anticipated spending $500,000 of that reserve to upgrade Danville’s 911 center with “next generation” equipment that would allow dispatchers to receive video calls and text messages, among other things.
But since then, Boyle County has begun looking into the possibility of splitting from Danville for 911 service, routing calls outside the city to Bluegrass 911 in Garrard County instead.
On July 12, Danville sent a letter to Boyle County requesting that the county transfer all of the funds to city within 15 days. Boyle County did not comply with the request; Boyle County Treasurer Mary Conley said there needs to be a written interlocal agreement in place as to how the $700,000 would be used before the county should give the city the funds.
“There needs to be a mechanism in place and agreement on both ends,” she said in late July. “Otherwise, it’s just going to be sheer chaos.”
Despite Magistrate Hendricks’ insistence on July 11 that the county has already promised the funds for the upgrade and intends to provide them when it’s time, the question of “whose money is it?” has been asked repeatedly at fiscal court meetings.
Whose money is it?
Magistrate Caywood asked the question again Tuesday: “Have we decided whose money it is?”
“We have not made a decision on that,” Boyle County Attorney Lynne Dean said.
Dean and Conley said they are continuing to try to get final answers on where the 911 money belongs and how Boyle County can use it properly. Conley said she believes a state regulation requires that funding from landline and cell phone 911 revenues be spent at a certain ratio, and the county could get itself in trouble down the road if it gives the money to the city and the ratio isn’t maintained.
Conley said she attempted to get some clarification from the state board that oversees cell phone funding, but was told that the board and director are all relatively new appointees and didn’t know themselves how to answer her question.
“We want to make sure that if somebody comes to audit us, that we’re not going to be hit,” Dean said.
“That’s a bad reflection on me if they come back and say we’re not spending those monies properly,” Conley said. “And it’s a bad reflection on me personally, professionally and how I do my job.”
IF YOU GO
Boyle County Fiscal Court plans to hold a special called meeting to discuss 911 funding issues at 10 a.m. on Tuesday, Aug. 29, in the fiscal courtroom at the Boyle County Courthouse.
You Might Like

New sign installed at Bate: Dedication for school renaming to be held Saturday

Photo submittedKirby Stafford, left, talks to the installers of the new letters for the front of the John W. Bate... read more