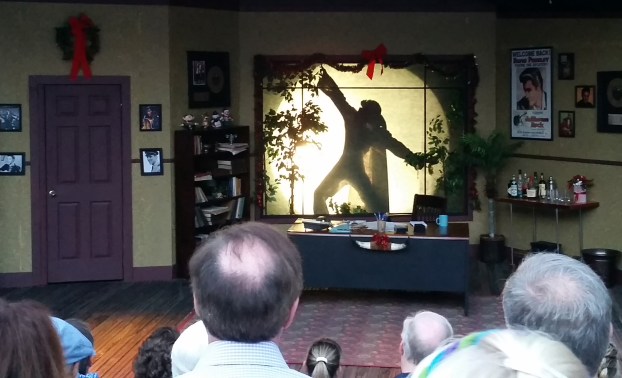 From the House: All shook up for Elvis

Pioneer Playhouse is leaving its 68th season with “Elvis Has Left the Building,” a comedy that pays homage to the King of Rock and Roll.

This relatively short play has a split personality. Essentially the entirety of the first act is spent on introducing the characters, setting up the situation and advancing the plot to a relevant breaking point. The second act is where things get “all shook up” and the audience really starts laughing.

If the two acts were a comedy duo, the first would be the straight man and the second would be the funny man. If you’re an Elvis fan, don’t be too disappointed after the first act — there’s plenty of Elvis on the way after the intermission.

The play tells the story of Elvis’ manager, “The Colonel” (Robert Sean Parker), who is put into a panic when Elvis disappears right when he is desperately needed.

But while Parker holds the lead role, it is The Colonel’s simple-minded office assistant, Roscoe (Dalton Graves) who steals the show. 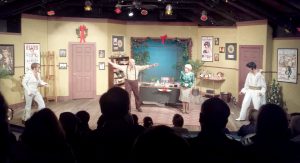 As Roscoe, Graves has one of the most physically demanding and erratic roles to play this season. He literally barks at the audience; he crawls around on the floor blind; by the end of the play, he’s danced on every inch of the stage.

Roscoe is an extremely geeky, nervous assistant who (spoiler alert) is turned into a grade-A Elvis impersonator — but his first attempts at playing the King are wonderfully terrible.

As The Colonel’s right-hand man Candy, Liam McDermott gets into the Elvis act, as well. The play seems to struggle to connect with the audience early on, but when McDermott and Graves both show up as Elvis, it doesn’t just break the ice with the audience, it shatters it.

Patricia Hammond and Erika S. Lee round out the small cast with solid performances as the Colonel’s secretary Trudy and a local reporter Jill Tanner, respectively.

Hammond and Lee are always good at connecting with the audience and making their characters believable, and that’s the case with “Elvis Has Left the Building.” Hammond in particular deserves credit for acting as a glue holding the play together. The opening-night performance had some fumbled lines and awkward moments, but Hammond always seemed to be there with just the right ad-lib remedy to smooth it over and keep things going well.

“Elvis Has Left the Building” is appropriately saturated with Elvis songs, lines that reference the titles of Elvis songs, Elvis posters and bits of Elvis history, such as that one time when Elvis weirdly met President Richard Nixon and asked for a narcotics badge. Parker as “The Colonel” not only shares a last name with “Colonel Tom” Parker, Elvis’ actual manager, but looks like a stunt double for him, too.

For Elvis fans who can’t get enough of the King, an Elvis impersonator will be performing prior to the showing on Aug. 16 — the anniversary of Elvis’ death.

BY MIMI BECKER If I was still in the classroom, the earth would possibly be rumbling and students would be... read more