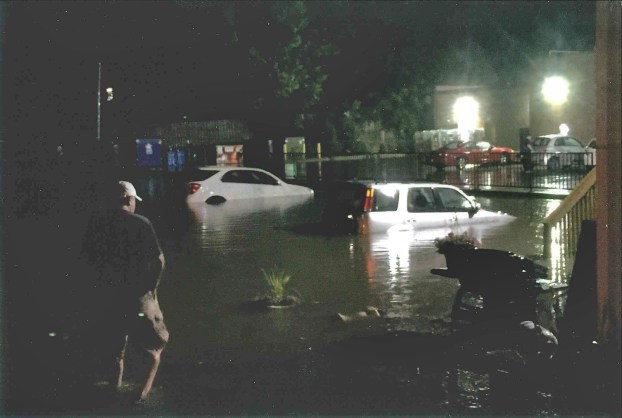 A Danville hair stylist has sued the city over recurring flooding at her downtown business, alleging the city created drainage problems years ago and has failed to fix the situation.

The suit was filed on behalf of Cathy Lynch and Changez Design Team Inc. by local attorney Bill Erwin. It names Danville and the Kentucky League of Cities as defendants.

“As a direct and proximate result of the City of Danville’s negligence, plaintiffs have incurred flooding on their property on numerous occasions,” the suit reads. “… (the plaintiffs) have incurred damages to personal property, real estate and loss of business.”

Erwin said after the Dollar General was constructed along East Main Street years ago, Danville worked on the drainage in the area, changing how some of the drain pipes work. Ever since, “each time it floods, they (Changez) have had to do significant work to clean it up and to fix the area,” he said.

“We’ve been on the city now for a year to try to do something physically to the property to try to alleviate the problem and no action has been taken,” Erwin said.

Lynch, owner of Changez, has erected a small retaining wall to try to keep water out of the business’ basement when it floods, but the city itself hasn’t done anything, he said.

Lynch said there have been three significant flooding events since the city changed the drainage system — in 2009 and 2013, and on Aug. 1, 2016.

Photos provided by Lynch show flooding in the parking lot outside Changez during the 2016 event, when water rose halfway up vehicles in the lot.

Lynch wrote in a statement provided to The Advocate-Messenger that she had no “water issues” for the first eight years she was in her current location. 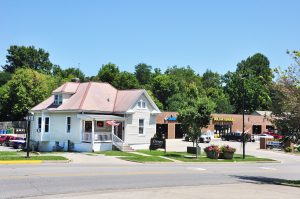 Robin Hart/rhart@amnews.com
Cathy Lynch, owner of Changez Design Team on East Main Street, building pictured at left, is suing the City of Danville due to recurring flooding of her business because of drainage problems she alleges the city has not addressed.

“The City of Danville is negligent in planning and design of drainage pipes, etc. It has caused my property to flood more and more with each supposed improvements,” she wrote in the statement. “I have lost property items, property value, personal items and business.”

Lynch said the city has repeatedly claimed it is not responsible for the flooding.

Danville City Attorney Stephen Dexter referred a request for comment to the attorney representing the city, Charley Cole with the Lexington-based firm Sturgill, Turner Barker & Moloney. Dexter said the city is insured by the Kentucky League of Cities for lawsuits of this nature, so KLC pays for the city’s representation.

Cole did not return a call asking for comment on the lawsuit.

The lawsuit alleges KLC is also liable because the agency “worked with the City of Danville to investigate the cause of the flooding and the damages sustained.”

“The Kentucky League of Cities actions in not attempting in good faith to effectuate prompt, fair and equitable settlement of the plaintiffs’ claims after liability became sufficiently clear, and compelling plaintiffs to instigate litigation to recover amounts due under an insurance policy are breach of (the) Kentucky Unfair Claims Settlement Practices Act,” the lawsuit alleges.

Erwin said he hasn’t received an answer from the city to the lawsuit and discovery hasn’t begun, so he doesn’t know what the city’s position will be.

“I think we’ll learn a lot more once we get into the discovery part of the case,” he said.

The lawsuit seeks judgment against Danville and KLC for loss of property value, “lost rents,” damage to personal property and lost income. It also asks for attorneys fees and “any and all other relief of which the plaintiff may be entitled.”

Erwin said the suit should result in the city fixing the drainage problem, as well.

Boyle hopes to answer questions about 911 funding with special meeting