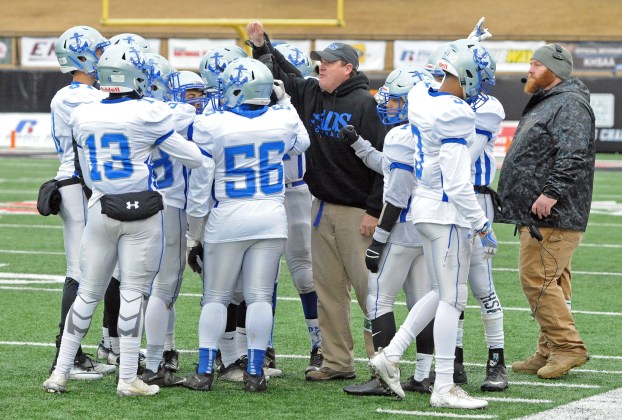 Admirals have speed and experience back in 2017

Last season marked the first time Danville football played in a state championship in a decade.

Team No. 106 is expecting the wait to be shorter this time around.

The Admirals bring back a bounty of starters on both sides of the ball, but have some big shoes to fill behind center: Zach Dampier threw for 3,574 yards and 43 touchdowns last season, but he’ll be at Georgetown College this fall.

Zach Thornton is expected to take over at quarterback this fall, with Tanner Ford supplying competition at the position.

In nearly every other position on the field, the Ads have experience. Playmaking senior D’Mauriae VanCleave thinks that experience will be a big boost this season.

“I feel like we have a lot of experience and history together,” VanCleave said. “We’ve all been playing together since little league. Last year, we lost a couple of good players … but I think we can rebuild. Defensively, I think we’re going to be very dominant and aggressive. On the offensive side, I think it’s really always about speed at Danville. We can be dominant if we play as a team, play as brothers and do what we do best.

David Walker is another to watch for the Ads on offense — he caught a team-high 16 touchdowns last season.

On the ground, coach Clay Clevenger will rely on bruiser Don Harris and the speedy VanCleave to carry the load. Junior Isaiah Miller will also spell Harris in the backfield.

Having that depth is something Clevenger hopes will lead to another productive year for Harris, one of the top two-way players in Class 2A.

“We’ve got some guys that are stepping up, having a good offseason, that we feel comfortable to be able to give him some breaks, especially on the linebacker side,” Clevenger said. “Early in the season with the heat and the number of reps we ask of him, I’d like to limit his number of hits on either side of the ball.”

Lineman Christian Hill led the team in tackles for a loss last season and will start the season exclusively on the defensive side of the ball.

Having depth on both lines is something that is new to Danville this season.

“I feel like we’ve got a little bit more depth there, which is always good,” Clevenger said. “Being able to rest (Hill) — I think it was a noticeable difference from about the second quarter on (in a preseason scrimmage vs. Southwestern). He was playing with a different gear that he might not have been playing with at this time last year trying to go both ways.

“Hopefully we’ll be able to do that because I think he can be a big presence that way. We’ve got about eight or nine bodies that we can rotate and hopefully keep guys fresh.”

Hill said his teammates in the trenches have stepped up this offseason.

“Our O-line is totally different now from last year. I’m only going one way, but our O-line is young, and they’re all stepping up,” Hill said. “Our defensive line — we made a few changes. They moved me to nose guard. We’ve got Shawn (Martinez) and Jaylon Brashear on the ends. We just all play as a unit and I think that’s why our offensive and defensive lines are so effective. We really execute well.”

Clevenger said the state championship game last season was a good taste for this team, but the 24-6 loss to Christian Academy of Louisville still stings.

Danville will open its season next week against Frederick Douglass in the Bob Allen Pigskin Classic.

That game has been scheduled for some time, but after last season’s success, the Admirals struggled to find teams to play in 2017.

“I think playing these bigger teams … gives us more confidence and more momentum throughout the season,” VanCleave said. “The teams we usually play are backing out because of the season we had last year, and that just gives us more motivation to get better as a team and go further than we did last year and finish it off.

“Last year didn’t end the way we planned, but we have been working very hard. We can always work harder, but I think we’re on the right path.”

Hill said the bond between players will be the deciding factor this season.

A baseball team from Perth, Australia, visited Danville over the weekend. Steve Fish brought the U-14 team from across the... read more