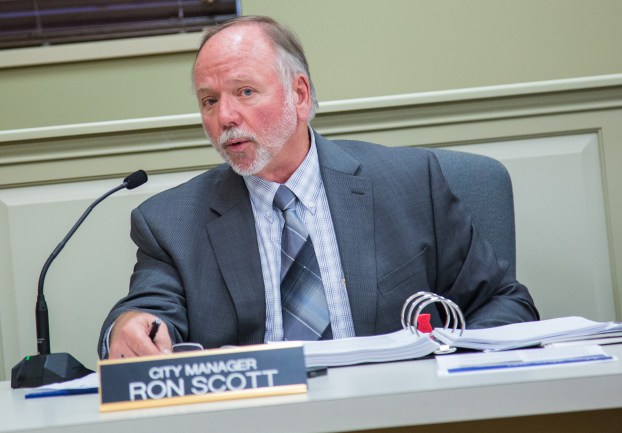 Danville has finalized a rate increase for its sewer customers and given initial approval to a small property tax decrease.

Officials say the sewer utility rate increases are the first major ones in two decades, and they are necessary in order to keep the sewer system from operating in the red and minimize the chances of an order from the Environmental Protection Agency that could require the city to spend millions.

Danville City Commission voted 4-1 in favor of the second reading of an ordinance setting the new rates Monday night.

Based on analysis of the ordinance by The Advocate-Messenger, the rates per 100 cubic feet of water are increased by the following amounts:

Danville City Manager Ron Scott and City Engineer Earl Coffey said the increases won’t be as extreme on the average customer’s bill as they sound.

“There will be some change, but I think that’s been exaggerated by the information that’s been presented thus far,” Scott said. “… The adjustment isn’t nearly of the magnitude as has been feared by residential consumers.”

Danville sends out its sewer bills on a bi-monthly basis.

“The average customer inside the city limits of Danville would see an increase of $9.92,” Coffey said. 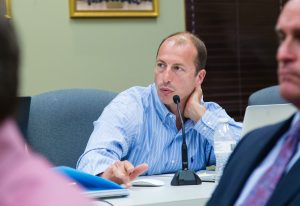 Under the city’s old rates, Danville had the cheapest “municipal utility rate” in the entire 17-county region of the Bluegrass Area Development District, Coffey said. Now, the city is the seventh-lowest.

Coffey listed off other cities’ sewer bills for the same 4,000-gallon amount: Richmond is just over $43; Winchester is almost $45; Frankfort is just over $40. Two cities with comparable rates to Danville are Harrodsburg and Cynthiana, which both have bills around $28 for 4,000 gallons. Nicholasville and Stanford both have lower rates at around $20, Coffey said.

Prior to consideration of the sewer-rate ordinance, the commission heard from one person during its “Hear the Public” item, resident Steve Becker, who spoke against the rate increase.

“I’m here for the citizens that can’t afford a sewer rate increase — and there are many,” Becker said.

Becker said he understands the reasons that a rate increase is needed, but asked why the commission couldn’t do a more gradual rate increase over time.

“I know the need is there; I really trust you guys on that,” he said. “But I really think that this needs to be levied over a little bit of time.”

Becker asked the commission to “go back to the shop and see if there are any other possibilities that might exist.”

“What’s it going to hurt if you put it off for two weeks?” Becker said. “That’s what I’m asking. Thank you all.”

During Scott’s city manager report, Perros asked Scott to respond to Becker’s suggestion of delaying the rate increase and implementing it incrementally over time.

Scott reiterated facts shared during previous discussions of the sewer rate: The city spent in the vicinity of $500,000 more than it brought in for the sewer utility in the last fiscal year and had to cover that deficit with water funds — something that is not technically allowed and that the city could not continue to do year after year; the city is not currently putting any money away for necessary upgrades and capital improvements to the sewer system; and without the increase, the city could find itself faced with an “agreed order” from the EPA requiring it to spend millions on its sewer system.

“The short answer is we’re losing money, we’re not keeping up with our operational system requirements, we’re not putting in any capital  investment to improve the system going forward,” Scott said. “Meaning if we don’t make some adjustment, it’s going to be a huge problem from an environmental agreed-order point of view … we’ll wake up one day with millions of dollars that we’re going to have to pay out and less notice.

“So this is the planned, proactive way.”

When it came time to vote on the ordinance, Perros noted not passing the increase or passing a smaller increase would also impact the city’s plan to take out nearly $8.9 million in bonds for a major energy efficiency overhaul project.

“Should we not pass this, or should we do it incrementally, does that do anything to the issuance of these bonds?”

“It will delay the issuance of the bonds, and so we will not be able to start our energy efficiency project,” Chief Financial Officer Michele Gosser said.

Coffey said taking the full increase now puts the city in a much stronger position and means it will have to borrow less money in the future when it’s time to upgrade the sewer treatment system. Less borrowed money means less interest owed, which means less money spent in the long-term, he explained.

“By taking the rate increase now, you’re ultimately producing a lower rate increase for the life of the utility — which again, is a 100-year life,” Coffey said. “… It’s a long-term effect to your rate.”

Gosser noted that while water funds covered the sewer’s debt last year, that won’t be an option in the future because the water funds will be used to begin paying bond debt on the water treatment plant. The city can’t use general fund revenues to pay the sewer costs, similarly due to bond conditions, Gosser said.

“I don’t think we have any responsible choice but to do this,” Perros said. “That’s one person’s opinion.”

“In this case, I would tend to agree,” Commissioner Kevin Caudill said. “… I don’t necessarily like it.”

Commissioner J.H. Atkins cast the first vote on the ordinance, and his was the only “no.”

“For the same reasons last (time), on the first reading, I still vote no,” he said.

When Danville passed the first reading of the ordinance in July, Atkins said the rate increases were hard to swallow.

“I didn’t take this job to raise taxes on my friends,” he said at the time. “But then I guess that’s all we’re talking about in 2017.”

Atkins clarified Monday that his referring to the rate increase as a “tax” was incorrect.

“Because I think it’s the only realistic and responsible action that we can take and it serves as a linchpin to many items moving forward that we have discussed for over a year now, I vote yes,” Perros said.

“I go along with that,” Caudill said when his name was called. “I just don’t think we have any choice, so I vote yes.”

Commissioner Rick Serres ended the voting with the fourth “yes.”

While the city commission chambers remained largely full for the discussion of the sewer rates, many had left by the time the commission got to an agenda item setting the annual property tax rates.

Commissioners unanimously approved a first reading of the city’s “compensating rate,” which is a rate designed to bring in approximately the same amount of property tax revenue as the previous year, not counting new property.

The compensating rate for Danville is 14.4 cents per $100 of assessed value, down from 14.5 cents last year.

Scott said Danville continues to have one of the lowest property tax rates in Kentucky.

“We did a survey a few years ago and of the 128 or 130 cities surveyed at that time, Danville was I think about 116 on that, and I don’t think it has changed significantly since that time,” Scott said.

The property tax ordinance must pass a second reading in order to become law.

At the request of a group of local residents, Danville City Commission unanimously passed a resolution Monday condemning the “acts... read more