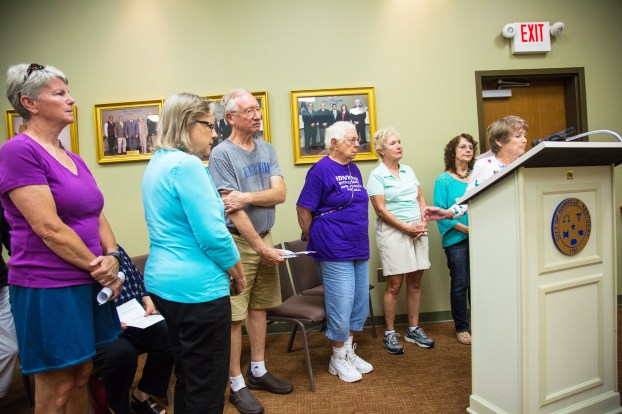 At the request of a group of local residents, Danville City Commission unanimously passed a resolution Monday condemning the “acts of racial hatred and violence” that occurred Saturday in Charlottesville, Virginia.

“We come as a group of citizens of this community who are heartbroken, outraged by the events that we saw in Charlottesville, Virginia, last weekend,” said Joanie Lukins, who spoke for the group of eight who attended the city commission meeting. “We believe that the response to these heinous acts of racism — those responses need to come not just from the federal government, or the state of Virginia, or the city of Charlottesville, but it needs to come from communities all across this country, no matter how large or small.”

The resolution states that Danville “promotes peace and unity among all people;” and strives toward “racial harmony.”

“We denounce the hateful racist words and actions witnessed in Charlottesville, Virginia, on Saturday, Aug. 12, 2017,” the resolution reads. “… the citizens of Danville, Kentucky, stand in solidarity with the people of Charlottesville in condemnation of acts of racial hatred and violence.”

Mayor Mike Perros noted that the commission does not usually have resolutions brought to it by members of the public and asked City Attorney Stephen Dexter if there would be any objection to the city passing a resolution that was not first vetted by city staff members.

Dexter said Perros was correct about the “typical format” of having staff present items to the commission for approval, but “this is clearly benign … if you wish to approve this in this format, I think you can.”

Commissioner J.H. Atkins motioned to approve the resolution as presented, noting that he was born in Fredericksburg, Virginia, which has been considered a sister city to Charlottesville.

“I offer the motion, with regrets that we need to do this tonight,” Atkins said.

Commissioner Kevin Caudill seconded the motion, adding that he is a former resident of Charlottesville.

All members of the commission voted in favor.

White nationalists gathered in Charlottesville over the weekend for an event called a “Unite the Right” march. Counter-protesters showed up to oppose the nationalists, and contention between the groups “escalated into brawling,” according to the New York Times.

Saturday afternoon, an Ohio man drove a car into a crowd of counter-protesters, killing one person and inuring many more, according to numerous news reports.

Two state troopers were also killed in the area, when the helicopter they were riding in crashed, according to news reports. The state of Virginia has declared a state of emergency.

Perros noted after the commission’s vote Monday that “while this was going on in Charlottesville, we were having a dedication of the Professor John W. Bate Middle School and moving that on to the Soul of Second Street (Festival).”

Geography a passion for Moreland 4-year-old

Kendra Peek/kendra.peek@amnewsJoshua points out and names the different countries in Africa. He’s not yet able to read, his mom said,... read more