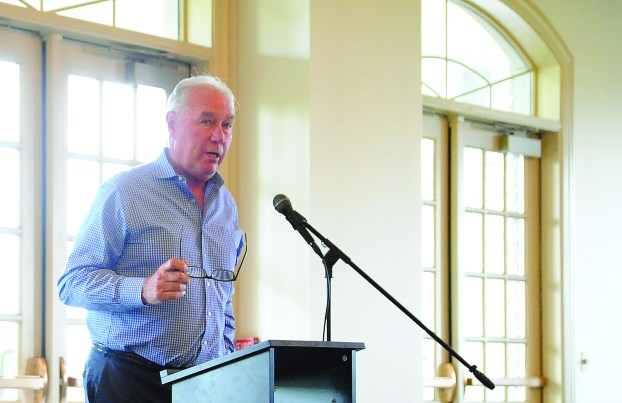 Held at the Danville Country Club and sponsored by Webster Orthodontics, the Admirals brought in players and coaches from the three other teams that will play in the bowl this weekend: Woodford County, Wayne County and Frederick Douglass.

Former Kentucky basketball star Mike Pratt was the guest speaker at the event. Pratt played for Adolph Rupp and was drafted to the ABA. He was inducted to the UK Athletics Hall of Fame in 2009 and now does color commentary for UK basketball games.

Pratt opened his speech by talking about his former high-school teammates.

“All of this stuff came back to me as I was doing some research to talk to this football group,” Pratt said. “I loved it. It brought back some great memories.”

Those former teammates are still friends to this day. He said that friendship was built through adversity.

“Adversity is a word that I think people nowadays don’t take as serious as it should be … You’ve got to deal with adversity and find a way to fight your way through problems that you have,” Pratt said. “We talk about a lot of things, but maybe we don’t talk enough to young people about battling through adversity. You have to have discipline to fight through adversity. It’s true in life; it’s true in sports.”

Pratt told a story of his high-school basketball team knocking off one of the top-ranked teams in the state of Ohio. He said that he met up with some of those opponents some 40 years later and they still remember that loss.

It’s those kind of relationships that are rare, and that memory is something he shares with his high-school teammates to this day.

“You have to have a team. You have to have a group of people that are pulling together,” Pratt said. “One of the great things about having a team — it’s something you live with the rest of your life. You make friends and build friendships that you’ll have the rest of your life … you have people that you’ll grow to love and trust. It’s important that you build right now for your future. It all starts right now, if you figure out how to fight through adversity.”

Admirals have speed and experience back in 2017

Last season marked the first time Danville football played in a state championship in a decade. Team No. 106 is... read more