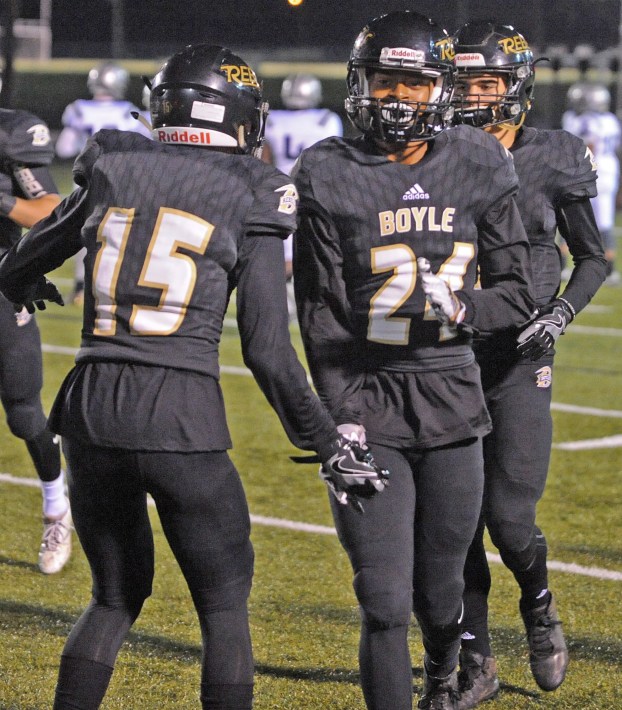 Rebels hoping for breakout season in 2017

A talented sophomore class coupled with an experienced set of linemen will have Boyle fans excited about a potential run in the state tournament, but a preseason scrimmage Thursday against 6A Madison Central showed that there is still plenty of room for improvement for the Rebels.

In front of those running backs is a new face: Sophomore Reed Lanter. Last season’s starting quarterback Sam Tiller is now at wide receiver for the Rebels, with sophomore Grant Hotchkiss behind Lanter on the depth chart.

Lanter will be throwing to a group of talented wide receivers, led by two talented sophomores and a senior. Upperclassman Nick Walker finished second on the team last season with 463 receiving yards, while sophomores Reese Smith and Reilly Colwick helped pace the team. Smith led the Rebels with 661 receiving yards and nine touchdowns in 2016; Colwick was third on the team with 261 yards.

Senior linebacker Kaden Gervacio said he and his fellow seniors need to show the team how to “get it done” on both sides of the ball.

“We’ve got a lot of young talent, but our leadership — we need to be better,” Gervacio said. “We need to show them how to get it done. We need to be more competitive, not just let people run over us. It’s on us — we’re the seniors, we’ve been here the longest and we have to get it done.”

Offensive tackle Will Bramel — who committed to Purdue in the offseason — said he thinks the sophomores can help the seniors lead this season.

“It’s not even just seniors; we do need to step up, but we have sophomores that have experience,” Bramel said. “We just all need to come together more as a team.”

Bramel said the scrimmage against Madison Central can be a wake-up call to the team before the season begins.

“It is early. We want to use this as a learning tool,” he said. “This isn’t where we’re going to be at the end of the year. But if we use this to get better, that’s all we can do at this point if we want to reach our potential goals this year.

“We have talent — that’s not going to be a problem for us. If we come together, the sky is the limit for us.”

Gervacio said he thinks the defense can lead the team early in the season, as the offense acclimates to a new signal caller.

“I feel like our defense … was kind of weak (against Madison Central) but I think our defense will be a strength,” he said. “That’s coming from a defensive guy — you kind of expect that. Our offense, our speed is going to help us this year. But we’ve got to make plays when we get the chance.”

Coach Smith said players taking on leadership roles is necessary for the team to achieve what it wants to this year.

“I think these kids have to understand that it’s not going to happen until they decide it’s going to happen,” Coach Smith said. “Right now I think they’re sitting around waiting for someone else to do it. Somebody has got to step up and say, ‘this is it; I’m going to be the man.’”

The schedule doesn’t do the Rebels any favors this year — seven of the Rebels’ 10 opponents are ranked in the top 10 in their class. But Bramel said the end goal is the same as it has been every year for him as a Rebel.

“We have a couple intermediate goals, game by game, but at Boyle County, the goal is always to win state,” Bramel said.

Colten Wilson has played tournament golf since he was seven years old. Last month, he competed in his first tournament... read more