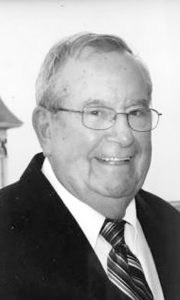 Bennie Engle, 88, of Stanford, passed away Sunday, August 13, 2017 at Ephraim McDowell Regional Medical Center. He was born in Hyden, Kentucky to the late Harrison Engle and the late Flora Bailey Engle.

Bennie is survived by his loving wife of 31 years, Barbara Johnson Brashear Engle. Bennie retired from GM as a forklift operator and was a member of the UAW. Prior to that he worked in printing for more than 20 years at various newspapers. He was a member of the West End Church of Christ of Danville. Bennie loved woodworking, farming and his family.

Funeral services will be 11AM Friday, August 18, 2017 at Preston Pruitt Spurlin Funeral Home with Jack Williamson officiating. Burial will be in Danville Memorial Gardens. Visitation will be Thursday, August 17, 2017 from 5-8PM at the funeral home. Also on Thursday, the COF (Catholic Order of Foresters), formerly the NFSD (National Fraternal Society for the Deaf) will hold a ritual at 7:00 PM.

In lieu of flowers, memorial contributions can be made to KSD’s Jacobs Hall Museum in memory of Mr. Bennie Engle. www.prestonpruitt.com