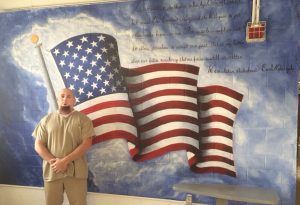 A mural of the American flag was recently completed in the Veterans’ Dormitory at Northpoint Training Center by inmate Joseph Maziarz who is a resident of the dorm. The mural includes the mission statement of the veterans’ program, “As veterans we should strive to live by a code of conduct built around honor, commitment, integrity, and the willingness to put others needs before our own. For as to be successful, we need to allow ourselves to accept our past, that we may better shape our future remembering that our future is still unwritten.” The mural also includes a quote from Earl Nightingale, “We are what we think about.”

Maziarz completed the mural in approximately two weeks. The project was supervised by Correctional Treatment Officer George Wilson and is the vision of Warden Don Bottom and Deputy Warden of Programs Brad Adams, who wanted the veterans’ dorm to have ownership of its goals and values.

There are plans for additional murals to be added in the Veterans’ Dormitory and throughout the institution.

The Veterans’ Dorm is supervised by Unit Administrator Stefany Hughes.

Anderson is a first-year student at Washington University. The Nemerov Scholarship is awarded to incoming first-year students in the College of Arts & Sciences who demonstrate exceptional writing talent. The award is for $3,000 and is renewable for four years.

During their time at Washington University, the Nemerov Scholars participate in a series of educational experiences designed to engage and inspire writers. Students enroll in the weekly Howard Nemerov Writing Seminar, interact with visiting writers, attend off-campus readings and workshops and earn a minor in writing or a concentration in creative writing.

The scholarship is named after the late Howard Nemerov, a prize-winning poet who taught at the university from 1969 until shortly before his death in 1991.

Nemerov, who was a professor of English and distinguished poet in residence, is widely regarded as one of the great American writers of the mid-20th century. Known primarily for his many poems, he also distinguished himself as a writer of short stories, novels, essays and a notable body of criticism.

He served as poetry consultant to the Library of Congress in 1963 and 1964, as a chancellor of the Academy of American Poets and as poet laureate of the United States from 1988 to 1990.

Nemerov received numerous literary awards and prizes, including the National Book Award and the Pulitzer Prize for “The Collected Poems of Howard Nemerov” and the National Medal for the Arts in Poetry.

This academic year, 109 high schools hosted more than 300 blood drives and received more than $75,500 in scholarships to present to students for their continued education.

“High school blood donors positively impact the healthcare of this state,” said Bill Reed, KBC’s President and CEO. “This year they provided more than 9,100 blood components, which have saved thousands of lives throughout the Commonwealth. We appreciate their life-saving generosity and are gratefully thanking them by awarding Power of Life Scholarships.”

Power of Life Scholarships are awarded each school year based on the units of blood donated at blood drives hosted by each high school or vocational school. Depending on the blood drive results, a school can receive a scholarship award of up to $3,000. The school has the option to present the scholarship in total to one student or divide it up among several students. Each school determines the scholarship recipient(s), and KBC pays the scholarship directly to the establishment of higher education.