Bill Meck never dreamed of anything but being a TV weatherman.  He has chased tornadoes, produced and hosted an award winning severe weather documentary (“Danger From the Sky”) and held positions at WOI in Des Moines, WSPA in Spartanburg, South Carolina, WLSL in Roanoke where he was Chief Meteorologist, and WTHR in Indianapolis.   Since arriving at LEX18 as Chief Meteorologist he has presented Weather 101 to over 100,000 kids.  His presentation today might be billed as “the most exciting 2 minutes and 40 seconds in astronomy.”  Bill Meck will be talking about the first eclipse since 1918 with a path of totality crossing the USA from Oregon to South Carolina.  Even more exciting, its ideal location for viewing is in the heart of western Kentucky. 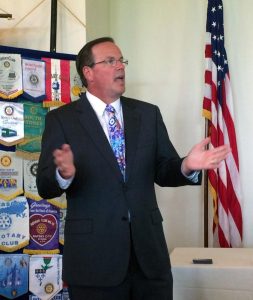 “I’m happy to be here in Danville, its one of my favorite cities.  I wish you folks could move a little closer to Lexington, it’s just too far for me to commute, Mayor if you can do something about that, I’d appreciate it.”  “We kinda like having it like it is!”

“I came here today to talk about the celestial event that could be billed as, ‘the most exciting 2 minutes and 40 seconds in astronomy’.  For those of us of a certain age, it’s something that hasn’t ever happened in our lifetime.  Next Monday, August 21, 2017, we will witness a solar eclipse whose path of totality will cross the United States from the Pacific to the Atlantic.  The ideal location to view it will be nestled in the heart of western Kentucky.  The exact location is situated on the Orchard Dale historical farm outside Hopkinsville, Kentucky.  The duration of totality will only last two minutes and 40 seconds, but this will represent the longest opportunity to view the eclipse in the entire world.

For those of you that are a little bit younger, this is the first of several events that will be coming in the next quarter century.”  There will be three more total eclipses that will passes very close to where we are.  So you younger folks will get a chance to enjoy the heyday of American eclipses.  Every month the moon, on its path around the earth, passes between the earth and our sun and some eclipse occurs.  It may not be visible on earth, because the path is constantly changing.  Sometimes the umbra, the darkest of the shadow that is cast, is too high or too low for us to see.  When that happens it is called the annular eclipse of the sun.  You probably did not notice, but we had an eclipse a couple of days ago.  There is one coming up in 2024 that will start in Mexico that will also cross western Kentucky.  It will have a wided path than the 70 miles wide path we will see on the 21st.  In 2045 there will be an eclipse that is the granddaddy of them all!  Its shadow will be 170 miles wide.  There will be places along its path where the totality will last six minutes.  It will be spectacular!”

But a week from Monday the orbital mechanics are going to be lined up perfectly.  For 2 minutes and 40 seconds Hopkinsville will be in total darkness, except for the corona of the sun.  A corona of the sun is an aura of plasma that surrounds the sun.  It extends millions of kilometres into space and is most easily seen during a total solar eclipse.”  Here in Danville, your timing is approximately the same as in Hopkinsville.  If I remember correctly, it will be about 2 minutes and 19 seconds.  It will still be a big deal astronomical event.

“The August 21 solar eclipse will be a media event!  It’s being talked about all over the Internet.  LEX18.com has an entire page dedicated to it.  People want to know about it, because it is an extraordinary event.  I’m leaving a week from today, heading to Hopkinsville.  It will be me and a quarter million of my closest friends out there in Hopkinsville.  We will be doing broadcasts Saturday and Sunday, giving you a feel of what’s going on.”   For this town of just over 30,000 people, it’s a really big deal. As many as 100,000 people are expected in the city, and up to a half million more will converge on the rest of western Kentucky. Local parks will become campsites. Schools will close. The National Guard will be on standby for traffic and crowd control.  “On Monday we will have an hour long broadcast at 2:00 in the afternoon.  Then we will be online giving you a play by play.  There are students from the University of Kentucky, engineering and science students that have joined students from a lot of other universities that will be launching weather balloons along the path of totality with cameras attached.  NASA will have a series of weather balloons that will be above the clouds.  So you will be able to see the eclipse from the shadow on the grounds to the view from above the clouds.  Even if the weather does not cooperate, you will get to enjoy a spectacular event from anywhere in the United States.  If you are in the area of totality, you will be able to see Mercury, Venus and Jupiter around the corona of the sun.  That’s my story.  Are there any questions?”

Veterans’ dorm mural completed at Northpoint Training Center A mural of the American flag was recently completed in the Veterans’... read more