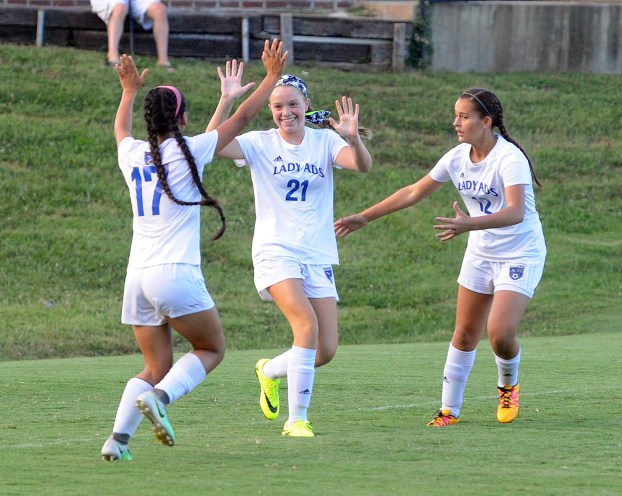 It has been a long week for the Danville girls’ soccer team.

But the Admirals came through in their third of four games this week, winning 6-3 against East Jessamine. Danville is now 3-0 on the season.

The Danville offense continued to do what it has done all year: Score goals. The Ads are up to 16 goals through three games and have done it through multiple players: Five different Admirals were on the score sheet in Thursday’s win.

It was East Jessamine who opened the scoring, however, due to the Ads struggling to clear a cross.

But Danville responded quickly. Abbie Hibbs hit the crossbar and gathered the rebound to assist Jaylin Nash for the Ads’ first goal of the game.

East Jessamine scored again just minutes later on another cross, but the Ads responded through a long-range effort from Maggie Milby to tie it again at 2-2.

“We didn’t play our best, but we’ve had a long week,” Danville coach JD Smith said. “It’s our third game in four days. We weren’t really sharp, we didn’t pass the ball very well. Our movement wasn’t real great, we fatigued early. But what I like the most, this is the first time we’ve been scored on. When questions were asked, we answered. Questions were asked again and we answered. Eventually we took control.”

Danville would score two goals in the span of a minute — one long-range effort from Courtney Howe and a breakaway goal from Hibbs — to break the game open.

“I like the fact that we could stay composed and still get the job done,” Smith said. “I told them that there’s going to be some nights when it’s good to just get the job done, especially when you’ve had a long week. Now we can refocus on Saturday and next week.”

“East Jessamine, they fought hard,” Smith said. “They had some talented girls that were able to take advantage of our mistakes.”

Milby recorded two assists later in the second half, first setting up Lara Akers in the six-yard box before assisting Howe’s second goal of the game.

East would score one more before the final whistle.

Smith said he has liked the way his midfield trio of Nash, Howe and Kelsie Steber have settled together. All three are upperclassmen, something that has been rare for Smith during his time at Danville.

“This is one of the most experienced teams I’ve had while I’ve coached here,” he said. “I think this is the first time we’ve had a whole lot of upperclassmen. We’ve got a great group of seniors and they’ve really taken charge. Kelsie and Courtney have done a good job controlling the midfield with Jaylin, who’s a junior. She’s had a real good start to the year.”

“Abbie, who is our leading goalscorer this year, this is her first season starting and she’s stepping up filling that void of goals up top,” Smith said. “She’s doing a good job.”

But Smith’s favorite thing about this team? They’re all involved.

“It’s spread out. Looking at our stats, it’s not one person who’s scoring eight or nine goals and others have just one,” he said. “It’s several people with two or three goals. It’s the same with assists. We’re moving the ball around and getting a lot of people involved. That’s the kind of style we want to play and usually we do a pretty good job of it.”

The Admirals return to action Saturday at South Laurel.