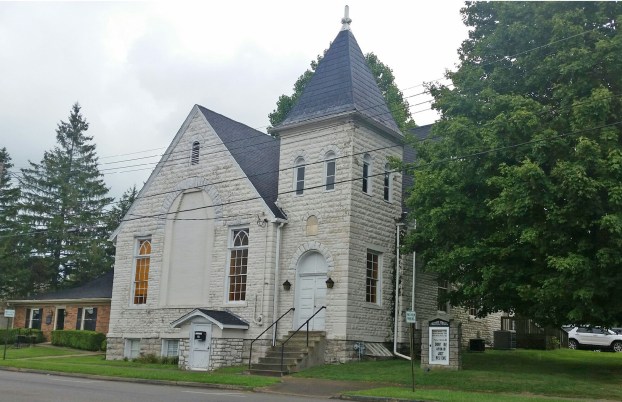 Kendra Peek/kendra.peek@amnews The Second Street Christian Church has been approved by the Architectural Heritage Board for the placement of a ramp leading from the front door of the church to the side, wrapping behind the existing sign and exiting toward Second Street.

The historic Second Street Christian Church in Danville will be getting a needed update after the Danville Architectural Heritage Board gave approval to add a ramp on the building.

“It will make it a lot easier for funerals, also for our senior citizens,” said Dennis Miller, pastor of the Second Street Christian Church.

He spoke to members of the board on Wednesday about plans to build a ramp on the front of the building, which would turn to the side, wrap behind the church sign and then back toward Second Street.

“We want to do it the right way. That’s why we’re here,” Miller said.

The ramp will have a textured block base, which will be made to match the existing block on the church. It will also have iron rails, so it will be “good and sturdy,” he said.

“I look forward to seeing that,” said board member Tom Tye. “I know you have a lot of church members looking forward to having that.”

Board member Mary Girard said the church was of historical significance, and had been proposed for the National Register of Historic Places.

“That building was one of the first formed concrete buildings in town,” Girard said. “I’m always glad when things get a little bit more accessible for folks.”

Codes Enforcement Officer Tom Broach said a handicapped parking space is “on the list” to be marked near the church.

“The parking will be fine,” Broach said.

The board approved the ramp request, and learned that there are other plans to restore the block of the church, removing the paint and finding a way to seal it up, as well as replacing the doors. Miller and church members were told to bring back all the details when they are closer to starting those projects.

The board also heard from Jacob Pankey, the chairperson of the Boyle Landmark Trust regarding the Willis Russell Memorial House. The trust is working to get the log structure placed on the National Register of Historic Places, something that Paney said is “long overdue.”

According to Danville Ordinance 4-175, the Architectural Heritage Board and the Danville City Commission have to give comments regarding any structure applying to be on the register. Those comments, whether positive or negative, are attached to the application and submitted together to the Kentucky Heritage Council.

The board told Pankey they would likely be behind the request, but asked him to return when the draft has been finalized.

Two juveniles were removed from a residence with the assistance of social services Tuesday afternoon, more than 42 hours after... read more