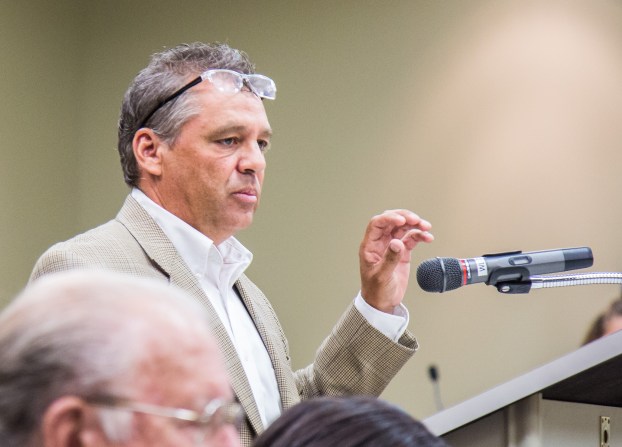 Danville-Boyle County’s new Planning and Zoning Director plans on making quite a few changes, many of which he ran past the P&Z Commission Wednesday morning.

The biggest idea Steve Hunter proposed was the creation of an advisory committee that would include representatives from the City of Danville, Boyle County Fiscal Court and P&Z.

“It sounds like I’m making this up and I’m real smart but actually, it’s already been brought up by the other governments that this would be a good thing.”

Hunter said he thinks the advisory committee could meet monthly and begin working on ideas to change how P&Z operates.

Hunter said the P&Z Commission would retain all of its current authority to make decisions.

“But I think it would be helpful to have the other two governments in the room,” he said.

“I think professionally, it’s a good step in the right direction to bring the three agencies together and get a better understanding of the expectations,” Leber said.

Among Hunter’s targets for change are the P&Z bylaws and the interlocal agreement that gives P&Z its authority.

“When I accepted the job, I went to see our bylaws and I went to see our interlocal agreement. … I was taken aback just a foot or two — they seemed a little bit dated, they were awful thin (compared to) what I’m used to seeing.”

Hunter said the advisory committee may look at the interlocal agreement first.

“That’s how our funding works; that’s how we work as a team with the other governments; that’s all our authority to be a planning commission, and there’s several things not in that that surprised me,” he said. “Most interlocal agreements (are) a little more specific than that … ours has very little guidance in it.”

“There should be a lot more in the bylaws about how we elect officers and things we do internal(ly),” he said. “I think I can bring you a housekeeping bylaw amendment at the next meeting that you guys can get ahead of time, look at and realize, ‘hey, this is typically what a planning commission would have as a set of bylaws.’”

P&Z Vice Chair Jeffrey Baird noted that one of the cities in the original interlocal agreement — Junction City — is no longer a part of P&Z.

Hunter said he hopes to meet with Junction City Mayor Jim Douglas to get a better sense of how Boyle County and Junction City got to where they are today, with P&Z over all of the county and the two other incorporated cities, but Junction City outside of P&Z authority.

Hunter reiterated he’s not suggesting any changes to that current arrangement, but is interested to learn more. In Warren County, where Hunter worked as planning director, he said there were multiple zoning ordinances in order to please the desires of different governments, and that was OK.

Something else Hunter said he’d like to look at changing is the threshold for when construction work must go through the site plan approval process.

The current system requires site plans for too many small projects that could just move straight to the building permit process, he said.

Hunter held up an item on the P&Z Commission agenda Wednesday morning as an example: The Marathon gas station along Hustonville Road next to the old Red Wing factory wants to add on a 960-square-foot space.

“To me, this seemed fairly routine when you’re already zoned commercial, the building is already on the ground. I was a little surprised I had to go through a full site-plan approval — engineer drawings, technical review, planning commission approval — to basically do a small addition on the back of an existing gas station,” Hunter said. “… this applicant had to file this application, complete with a fee of $561, hire a survey engineering firm to do basically a full set of drawings, you guys have to look at this very small addition on this existing site … I really thought this would go straight to a building permit. I was a little taken aback that you have to do this process.”

During the public hearing on the site plan, a residential neighbor of the gas station stated she is concerned that her house already suffers from a drainage problem when there’s a heavy rain, and she doesn’t want the new construction to worsen the situation.

Hunter said the project is so small that it doesn’t trigger the need for a drainage study, but the property owners could work something out amongst themselves. The P&Z commission approved the site plan on the condition that the affect property owners and P&Z staff meet to look at the drainage issue and see what options would be available.

P&Z Chair Leber and Vice Chair Baird volunteered to serve as the two representatives of P&Z on the proposed advisory committee.

Boyle County has hired the president and CEO of the Kentucky Association for Economic Development to serve as the new... read more