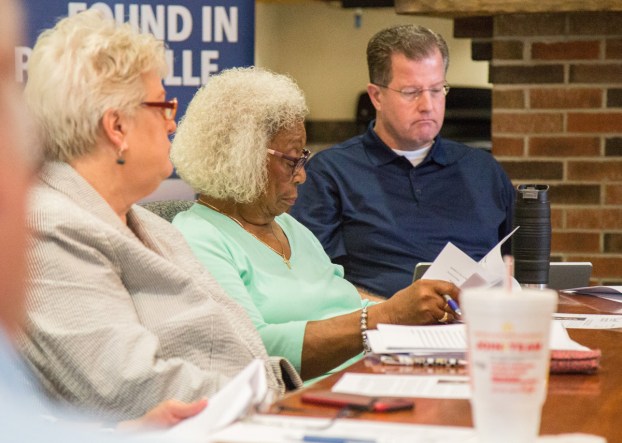 Ben Kleppinger/ben.kleppinger@amnews.com Perryville Mayor Anne Sleet studies proposed new bylaws for the Danville-Boyle County Economic Development Partnership during Wednesday’s EDP board meeting. The bylaws would require Perryville to pay a little more than $500 in order to have a vote on the EDP board.

Junction City, Perryville may have to ‘pay to play’ with EDP

“Pay-to-play” language in proposed new bylaws for the Danville-Boyle County Economic Development Partnership would require Junction City and Perryville to begin contributing small amounts of funding if they want a voting seat on the EDP.

The bylaws, which the EDP board reviewed in a public setting for the first time this week, would require “local government partners” to provide a minimum of 67 cents “per resident of the partner’s jurisdiction” in order to gain voting privileges.

The population each partner is responsible for would be determined by the most recent U.S. Census, according to the proposed bylaws.

As of the 2010 Census, Junction City had 2,241 people; and Perryville had 751. That equals minimum contributions of $503.17 for Perryville and $1,501.47 for Junction City if the bylaws were to pass. If the cities did not contribute those minimum amounts, according to the bylaws, they could still each appoint one director to the EDP board, but could not vote.

EDP Chair Ben Nelson said the idea for a minimum contribution came from strategic planning discussions about the need for public partners to be invested in the EDP’s activity.

“We want the price of admission … to be a reasonable amount, so if you go and look at the math, what this represents for Perryville and Junction City is a very low cost of admission,” Nelson said. “… We want them to stay involved. That’s the most important thing. It’s not about the money; but the answer is to get some skin in the game, they’ve got to make investment.”

Nelson said “it’s a formula that creates an opportunity to get into the investment of economic development.”

“We think and hope those partners continue to be involved as they have been,” he said.

Under current EDP structure, Boyle County, Danville, Junction City and Perryville all get one vote on the board, regardless of whether those governments contribute to the EDP budget. Those are four of the 14 voting seats; the rest are a chairman, vice chairman and secretary/treasurer; two at-large seats; and individual representatives from the Boyle County Industrial Foundation, Chamber of Commerce, Convention and Visitors Bureau, Heart of Danville and Main Street Perryville.

The proposed reorganization of the EDP board would give Danville and Boyle County each three seats and Junction City and Perryville each one. Other voting members on the 17-member new board would include three people appointed by the Boyle County Industrial Foundation; three appointed by private “Chairman’s Circle” donors; and three at-large members voted on by the rest of the board.

The Chamber of Commerce, Convention and Visitors Bureau, Heart of Danville and Main Street Perryville would no longer have voting seats, but would be included as “advisory partners,” under the proposed bylaws.

“This attempts to lessen how tightly woven this partnership is. It tries to free up those organizations to go focus on their core mission, with the hopes that we will continue to collaborate and work together as we have in the past,” Nelson said.

None of the four partners who would lose the ability to vote on the board have made an objection known, Nelson said Wednesday during the meeting.

“… What this does is it frees those partners up to collaborate where it should naturally occur and lessens the amount of energy we’ve been spending on trying to force collaboration where it’s not needed.”

Jennifer Kirchner, executive director of the CVB, said, “As a staff member, that’s been exactly my experience so far.”

The bylaws are based on an agreement reached by Danville, Boyle County and the Industrial Foundation in July, setting up the proposed three-seats-apiece split. The EDP board did not vote on the bylaws Wednesday, but could vote to approve them at its Sept. 20 meeting. If approved, the new board — short of the at-large members that would have to be voted on — could meet in October.

Nelson said the bylaws are “foundational stuff” that the EDP needs “so we can rock and roll.”

Boyle County Judge-Executive Harold McKinney said he believes the proposed bylaws “accurately represent what we’re going to try to do and I think they accurately represent our intention as to open records and open meetings and our subjection to those rules and regulations, whether we are statutorily required to or not.”

A similar section exists in the EDP’s current bylaws, but only references the Open Records Act, not the Open Meetings Act.

“I’m sure there are imperfections, but we need these as to attract those new investments,” he said. “… This is a perfect example of how the partnership is supposed to work. We’ve really come together on this.”

Tobacco cutting season is here, even though many may not realize it — there seem to be fewer and fewer... read more