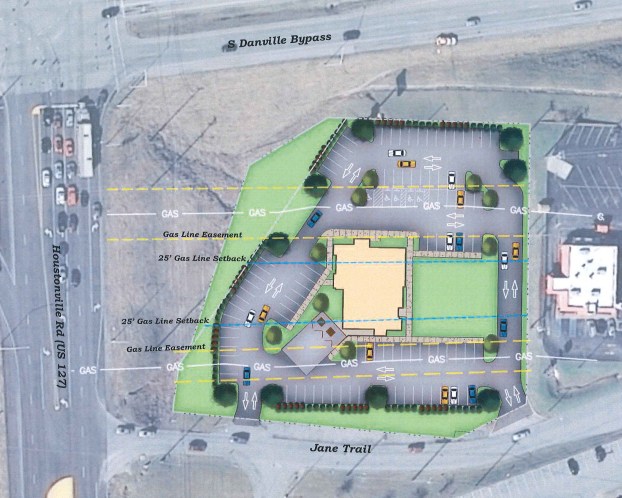 Graphic courtesy Board of Adjustments A drawing provided by the Board of Adjustments shows how a sit-down restaurant would be built on a property at the corner of Hustonville Road and the Danville bypass. The building will be situated in between a pair of gas lines running underneath the property. A variance has been granted for the building to encroach on a set-back created by a local zoning ordinance, but the building will not encroach on gas-line easements owned by the utility company.

The local Board of Adjustments has given its OK for a new sit-down restaurant to be built at the corner of Hustonville Road and the Danville bypass.

The variance needed to allow construction near a pair of gas lines appeared on the board’s agenda three months in a row. In June it was delayed; in July it was tabled while board members considered the situation.

Thursday morning, after close to an hour of discussion and questions, a motion to allow the variance passed without any votes against it.

The as-of-yet unnamed restaurant is planned to be built on a nearly 2-acre plot of land owned by Greer Properties in front of Walmart. It’s the lot where the King Buffet building stood until earlier this year.

Jody Lassiter, president of the Economic Development Partnership, directed a question about the name of the restaurant to Lee Greer. Greer did not immediately respond to a message asking for comment left Thursday afternoon.

A space remains in the plan that could potentially be developed into a second business, but for now it would remain undeveloped green space, said Jihad Hallany, principal engineer with Vision Engineering.

Steve Hunter, director of Planning and Zoning, told the board he sat down with the land owner and the applicant to ask about the plan for an oil-change business because it seemed odd.

They told him they wanted to locate two businesses on the property, but the limited parking meant the second business would have to be one that didn’t require a lot of parking or was busy at a different time of day, Hunter said.

As of right now, that second business has not been found and so the second building has been removed from the plans, Hunter explained.

Hallany said his client was “speaking to two potential clients” for the restaurant building, but the limited size of the parking lot — the plans call for 103 spaces — was too small for one of them.

“We are looking for a tenant that does not require much parking,” Hallany said. “So that whatever available parking can meet both requirements of the two tenants.”

Parking space on the property is somewhat limited because the gas company that owns two lines passing under the property said they wouldn’t allow any additional fill to be used on top of their easements. That means instead of removing the original parking lot and putting in an entirely new one, the existing one will be milled and resurfaced, Hallany explained. Doing it that way cost about 20 parking spaces, he said.

The gas lines — and a local zoning regulation relating to buried gas lines — are why the project had to come before the Board of Adjustments.

In addition, the local zoning ordinance requires a 25-foot-wide set-back from gas-line easements, further extending the zones around pipelines where structures are not allowed.

In order to build the restaurant as planned, the structure must encroach on the government’s set-backs to the north and south — but not the utility’s easements. The variance granted Thursday allows for that encroachment, but only for the construction of the restaurant. If a second tenant is found, they would have to come before the Board of Adjustments again to obtain a new variance.

Hunter said the local set-back requirement is unique to Danville, as far as he knows.

The new restaurant would actually encroach on less square-footage of the set-back than the previous building, King Buffet, which was grandfathered in. Hallany said the new building would encroach on about 57 percent as much as the old building.

“Our standard is a little odd to me. I’m not aware of ever seeing an additional setback along an easement,” he said, explaining that he went back to look at minutes from when the requirement was first passed in 2004. “It’s one sentence and I couldn’t find any detailed information on how or why … all I can tell you is section 5.1.11 says that’s what we do in Danville. And it says ‘City of Firsts’ on the tower, so I guess maybe that’s what we do.”

Hunter said he has seen easements as wide as 75 feet on gas lines and as narrow as 20 or 30 feet. Typically, older developed areas have the narrower easements, while new construction will often feature the 75-foot level of easement.

Hunter noted during the meeting that Danville has another regulation that looks odd to him — after voluntarily tearing down a structure, an owner can rebuild in the same footprint of the old building, even if it would otherwise violate zoning regulations, for up to 12 months after the original building is demolished.

That means a building could hypothetically be constructed in the old King Buffet footprint without approval from the Board of Adjustments. Hunter said he doesn’t think that would happen in this case, but it’s a “worst case scenario” that could happen in the future if the rules aren’t changed.

Prior to approval, Board of Adjustments member Jesse Purdy asked if anyone could guarantee that nothing would happen to the pipelines.

“No one can guarantee that,” said Kevin Nesbit, an attorney representing Greer.

“That’s like guaranteeing that lightning won’t strike,” said Mike Lay, another board member.

Nesbit said Kinder Morgan is “more proactive” than the previous owner of the gas line in protecting their easements.

Jerry Leber, chair of the Planning and Zoning Commission, spoke to the board about the variance “just as a citizen looking at it.”

Leber pointed to the “quality appearance” of Cheddar’s another sit-down restaurant recently constructed to the south.

“I feel that if this is not approved, it may lay there for years as another eyesore, and I would hate to see us lose out on another business coming to Danville,” Leber said. “Some of us at P&Z have had the reputation of being not business-friendly and I want us to hopefully get over that reputation and become business-friendly and do whatever we can to bring this business and/or other businesses in to improve the City of Danville

“… I would just strongly encourage you to think about: If this goes away, that may lay there for years and grow up and be who knows what. I think we have an excellent opportunity here to bring in a quality business that certainly will improve the standard of living in Danville and Boyle County.”

Local Attorney Mark Morgan also commented to the board, noting that the effects of a pipeline rupture can be extensive.

“I just want to thank this body for being so careful … I think you are to be congratulated and drilling down as deeply as you are on particulars, including any future buildings.”

Linda Green, a member of the Board of Adjustments said she “struggles” with the 25-foot set-back rule, as well as the allowance to rebuild in an old footprint. She was in favor of the plan to build the new restaurant.

“I like the progress that we’re seeing and I agree we need something there that makes Danville look good,” she said.

The next step for the restaurant is for a site plan to be presented to P&Z, Hunter said. 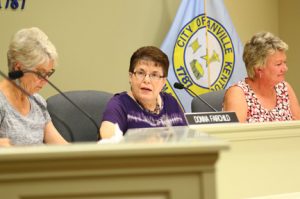 Junction City, Perryville may have to ‘pay to play’ with EDP