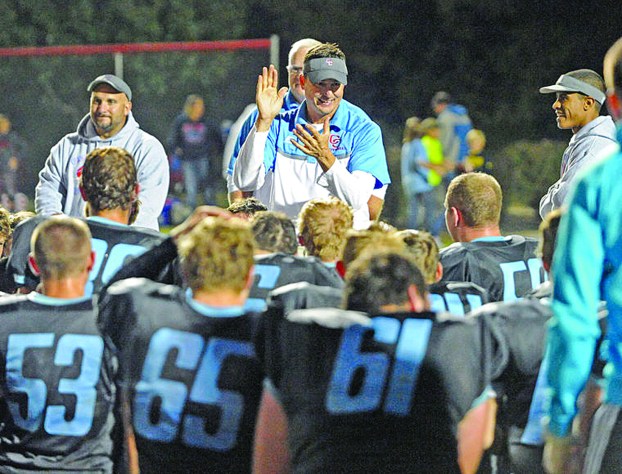 Casey County is out to prove last season was no fluke.

In his first-ever high school start, quarterback Austin Campbell set two school records: 370 passing yards and 24 completions in one game. Campbell finished 24-for-35 with three touchdowns and no interceptions.

““I’m really proud of how our guys came out and competed,” the coach said. “We must have the focus we had tonight every Friday night. I loved how physical our offensive line was tonight. Collin Allen, Austin Campbell, Gabe Singleton, Brigham Floyd, and Logan Combs blocked well in the run game and protected our QB well.”

Running back Preston Tucker had a career game, rushing 12 times for 110 yards and three touchdowns. He also caught two touchdowns — one 44-yard strike and one from eight yards out. Five touchdowns in one game ties a school record, joining Eric Raney from 2000 and Collin Miller twice last season.

“Preston Tucker had an excellent game for us both rushing and receiving,” Stonebraker said. “He has to continue to push himself mentally to perform at this level week in and week out.”

Dustin Richards set the tone through the air, catching eight passes for 130 yards. His eight receptions are tied for third-most in Casey County history.

Teammate Britt Pendleton had five catches for 94 yards and a touchdown. He also had a 36-yard touchdown run.

“Dustin Richards had his best game for us both blocking and receiving,” Stonebraker said. “He can be a huge weapon for us as the season progresses.”

Tucker played a hand in the first four Casey County touchdowns: He had three scoring runs in the first quarter and caught his 44-yard touchdown pass in the second frame.

Barren County would score on a 61-yard touchdown pass to make the score 28-7.

But that’s all the Casey County defense would allow. Barren finished with 207 yards of total offense and the Rebels turned them over twice on the ground.

“I was very pleased with how our linebacker and defensive line played,” Stonebraker said. “A.J. Glenn and Ethan Ammons both finished plays well. I thought our down linemen controlled the line of scrimmage and that made their offense one dimensional. We had two sophomores in Keegan Hansford and Trenton Gibson that saw extensive time on the defensive line and were solid.”

Casey finished with 528 yards of total offense — the fourth-highest mark in school history.

“Our crowd support was excellent tonight,” he said. “I love the way this community supports our team. It makes it much more fun for the players and coaches.”

Casey County returns to action next week at home against Campbellsville.

Last year was an historic season for Casey County football to be sure — four team records were set in... read more