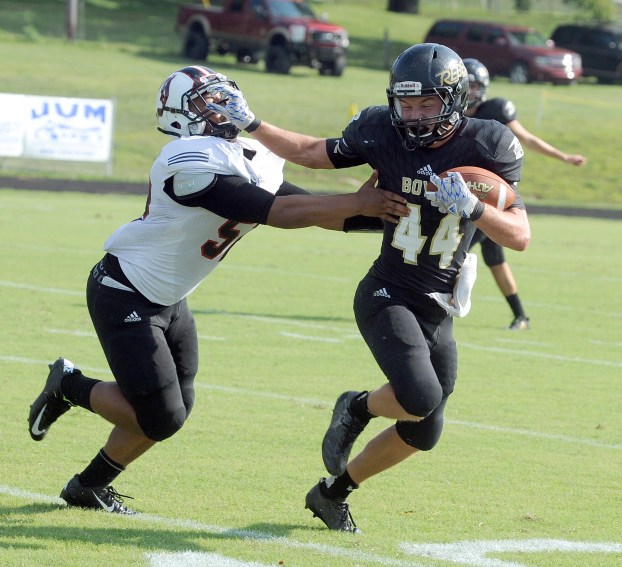 HARRODSBURG — Boyle County wanted to come into 2017 with a statement.

The Rebels did that, beating 4A John Hardin 41-6 in the Fort Harrod Bowl hosted by Mercer County.

Compared to last season’s opening game, a 21-20 overtime loss to North Hardin, Saturday’s game looked like a different team. The Rebels piled up nearly 100 more yards of total offense and the defense forced four turnovers — two of which returned for touchdowns.

“I think our guys really needed that,” Boyle head coach Chuck Smith said. “They’ve been wanting to come out and make a good showing, and I think they did. We had some guys step up and makes some plays, and last year that was non-existent.”

Playmaking came early Saturday: John Hardin’s first pass of the game and third play from scrimmage was an interception returned for a touchdown by Landon Bartleson.

Bartleson had himself a day on both sides of the ball, scoring two more times — once on a 5-yard catch and once on a 55-yard run.

After one quarter, that score separated the two teams.

But Boyle struck early in the second quarter, when quarterback Reed Lanter found fellow sophomore Reese Smith on a screen. Smith picked up big blocks from his receivers and line to take the pass 37 yards for a touchdown.

Boyle forced a three and out on John Hardin’s very next possession, and the ensuing punt went zero yards. Running back Tanner Crawford scored from 21 yards out on the very next play.

Bartleson and Crawford owned the ground — in part due to the Rebels’ offensive line: Bartleson finished with 10 rushes for 87 yards and a score; Crawford had 19 carries for 163 yards and a touchdown, including an 81-yard run to start the fourth quarter.

Smith would add a pick six of his own late in the second quarter to give Boyle a 27-0 lead entering halftime.

Coach Smith credited his offensive line for creating space for his running backs and protecting Lanter throughout the game.

“The offensive line has really been practicing well, coach (Mike) Settles has done a great job with those guys,” coach Smith said. “He works their butts off every day and they respond to him. I think it showed up in today’s game. Tanner took advantage of it and Landon took advantage of it.”

Coach Smith said his playmakers are what separated this season’s win compared to last year.

“Landon had a big game, he had a big game on both sides of the ball,” coach Smith said. (Reese Smith) made some big plays. He had the screen play and an interception. I thought our playmakers made plays, and that’s what you want.”

Neither team scored in the third quarter, but Bartleson would punch in his receiving touchdown at the start of the fourth quarter.

John Hardin would finally get points on the board when quarterback Anthony Witherspoon hit Steven Livers in the flat. He appeared to be tackled, but instead rolled over a Boyle defender. The play wasn’t blown dead and he continued running to score from 69-yards out.

Lanter would give up a fumble on the Rebels’ own three-yard line, but the Boyle defense again held firm. John Hardin couldn’t punch it in and Reese Smith forced a fumble into the end zone on fourth down.

Coach Smith said those end-game struggles are what he wants to see cut out in the future.

“We had some bonehead stuff there at the end to give them an easy touchdown,” coach Smith said. “The officials didn’t blow it dead and the guy ran in for an easy touchdown. Then we turned the ball over on offense. But those are things that we’ve got to work out.”

Reese Smith was named game MVP for his performance on both sides of the ball.

The Rebels will host Waggener in the Rebel Bowl on Aug. 26.