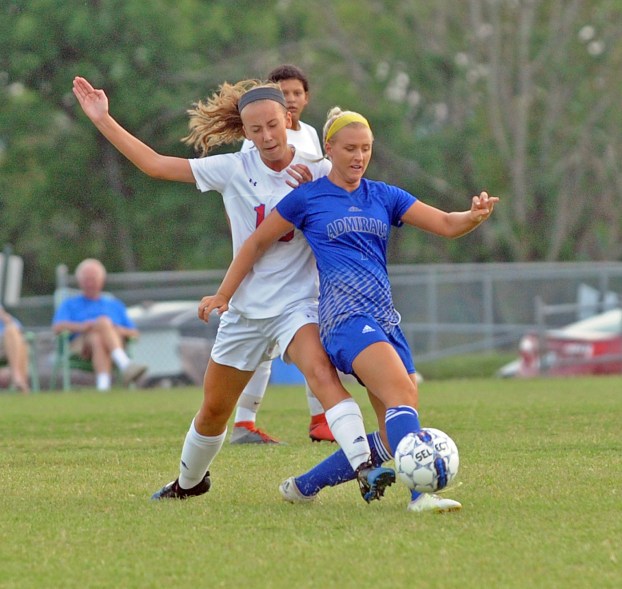 It was a physical, defensive battle for the Admirals, who tallied their fourth shutout of the season against a Mercer team itching to start its season with a win.

Danville showed its seniority throughout the game, but Mercer’s young talent made it an exciting finish.

“I thought we played well,” Danville coach JD Smith said. “I thought we passed the ball well, I thought we possessed as well as I hoped we would. Mercer is a good team, they’ve got some serious athletes. It was good to see our girls come out and play the way the did, be as sharp as they were and play with the intensity that they did.”

Mercer coach Josh Culver liked the way his team opened its season against an experienced team like Danville.

“I told them coming in that this was going to be a tough team to beat because they have a lot of upperclassmen,” Culver said. “We’ve had two scrimmages, this was our first game. They’ve had six games — two scrimmages and four games last week. They’ve had more time on the field together, and they did a really good job of winning things in the center, they were aggressive on defense. We had to make adjustments in the second half and I told them that we’ve got to start finding feet.”

The game was scoreless after one half, with neither team making significant moves in the final third of the field.

But seven minutes into the second half, Courtney Howe broke the deadlock. The Danville senior received a pass from Jaylin Nash in the midfield and took a chance from 30 yards out. The ball looped over the keeper and into the Mercer net.

Danville kept the pressure up the entire half, with Kelsie Steber coming closest to making it a 2-0 game when her free-kick hit the bar.

“Our back line did a great job tonight,” Culver said. “They did a really good job of denying shots. Defense, I think we’re pretty good, we’ve got to work on offense and getting possession in the center, put passes together and get it closer to the 18.”

Danville’s defense was also up to the task, something that Smith was quick to note after the game.

“Defensive end, we graduated pretty much our entire defense, besides (goalie Grace Gaffney),” Smith said. “She’s a big part of it. She does great work for us. We have Kaela (Welch), who played varsity for us last year. Kailyn (Wilcher) and Zoe (Gooch), Zoe was a forward last year. She came back to the back line, and Kailyn went from midfield to the back line. They weren’t necessarily in favor of making those moves, but to have them to come in and play the way they are, it’s big. They’ve been really strong.

“It started in camp, and they’ve owned it. That’s what this team has, they’re willing to do whatever it takes for the team to win.”

As Mercer increased the pressure, Danville held. The game was physical throughout and both teams searched for another goal in the second half.

“Sometimes I worry about how we would do with a physical game, but tonight we did well with it,” Smith said. “I was really proud of their performance and their desire to win. When we went up, they fought hard to keep it.”

Culver said he was happy with the way his three starting freshmen — JoBeth Connolly, Abby Dean and Bella Garrett — played in their first varsity game.

“We had three freshmen starting, it’s their first time playing with this group in this type of game. And they held their own,” he said. “Bella did a great job in the back and Abby Dean was getting combinations with the forwards. As the season progresses, they’ll start learning those positions, knowing who’s where and reading one another. It’ll build over time, we’ve got a young team and we’ll work on it.”

The game was a good region barometer for the Titans, who have defending state champion West Jessamine in their district.

“I told them, this is a good test to see where we’re at,” Culver said. “You’ve got Boyle, you’ve got Danville, you’ve got West, you’ve got East. You’ve got a lot of good teams in here. I told them going in, it’s going to be tight, within a goal or two. They had their minds right coming in.”

Smith said that after a four-game week last week, it could’ve been easy for his team to relax today. But they were motivated.

“It would’ve been easy to come in here and say, ‘I’m tired.’ We went to South Laurel Saturday and played an early-morning game,” Smith said. “It would’ve been easy to come here and not get up for this one. But being a region game, especially in the north, this is a team that they know, they know these girls. It’s one they want to get up for. I didn’t have to say a lot to get them ready for this one.”

For both coaches, it was a fun 12th Region contest.

“That was a fun game to coach and be a part of,” Culver said. “It’s always fun when it’s a competitive atmosphere. That’s a good game for us to start because it shows we’ve got some learning to do.”

Smith said five wins in a row is a testament to how his team has bonded this early in the season.

“Everything I do it’s #family, and they’ve owned that,” he said. “I’m really excited to see where they go from here. It’s not going to get any easier, but I’m excited to see how they react to the challenge.”