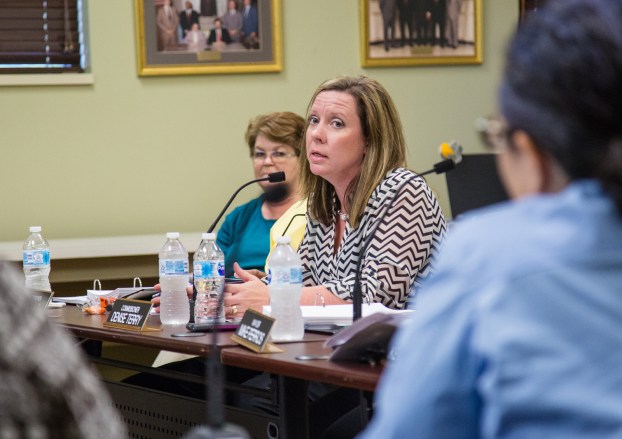 Danville City Commission reviewed a set of proposed design guidelines Thursday evening that could loosen restrictions on downtown businesses and expand the possibilities for public art.

Julie Wagner, a member of the Architectural Heritage Board, walked city commissioners through the guidelines, which were drafted by the AHB with help from consulting company Cultural Resource Analysts at a cost of about $16,000.

The current design guidelines dictate what can and cannot be done to the exteriors of residential and commercial buildings in the historic overlay district in downtown Danville. The AHB is in charge of authorizing projects as “appropriate” in terms of using the right materials and maintaining a historically accurate appearance. Property owners must obtain certificates of appropriateness from the AHB before they can modify the exteriors of their buildings.

Wagner explained the biggest goal with the new guidelines is to give the AHB the freedom to approve building projects in the downtown historic district that it likes and would benefit the area, but that the current, far stricter guidelines would not allow.

The guidelines would relax rules governing sign size and allow the AHB to OK public art such as murals on the sides of buildings, Wagner said.

In order for the guidelines to go into effect, they must be approved by the City of Danville and the Planning and Zoning Commission.

City commissioners said Thursday evening that they hadn’t had enough time to read through the lengthy guidelines and would need more time to digest them. Thursday’s special called meeting was just a workshop to familiarize commissioners with the guidelines and allow for public input.

One concern AHB members have, Wagner and AHB member Mary Girard said, is the potential need for a separate group from the AHB that could approve of public art proposals.

“The content is where we are concerned,” Wagner said. “Do you want your city body being the art police?”

“We don’t want to be the art police,” Girard said.

Wagner suggested a mural of Jesus Christ as an example of a project the AHB wouldn’t want to make a decision on. A formal governmental body such as the AHB deciding whether or not a religious symbol was OK wouldn’t be ideal, she explained.

But an “ad hoc” group of various community members with art knowledge and different interests in downtown could be in a better place to approve or reject proposed public artworks, they said.

Wagner and Girard told commissioners they should consider the possibility of creating such an ad hoc committee for that purpose if the guidelines are approved.

Wagner also asked commissioners to consider the need for a professional preservationist who would be able to authorize many projects immediately without them having to be brought before the full AHB.

As things are right now, if someone wanted to open a business and put a sign up on a building, they would either have to wait until the next regular AHB meeting to get approval, or the AHB would need to schedule a special called meeting, she said.

“If you come in with a sign and it meets (all the requirements), someone here should be able to (approve), ‘thank you, have a nice day, go put your sign up.’ You shouldn’t have to wait 24 hours or to the next month’s meeting to get that approved,” Tye said. “So there’s a few hurdles of not having some sort of a professional available for that. We may be able to handle it by contract.”

Commissioner J.H. Atkins brought up an email he received about the guidelines from a local resident he did not identify. The email warned about using phrases such as “not appropriate” in the new guidelines and suggested softer language.

Debate around the phrase “not appropriate” has been the main issue in AHB meetings leading up to Thursday’s workshop. Community members have stated concern that the words will discourage business owners from coming to the AHB with out-of-the-box ideas, and that future AHB members would interpret the words more strictly than the current members.

Wagner and Girard told the commissioners the issue has been debated at length, but the Kentucky Heritage Council was firm that the “not appropriate” language had to remain.

“We were looking for another word,” Wagner said. “But the Heritage Council said it is a certificate of appropriateness — that is what the Secretary of the Interior calls that process, and so you have to tell me what is appropriate.”

Wagner said under the language of the current guidelines, the AHB has seen many proposals come before it for approval that members liked, but could not say yes to because there was no wiggle room.

Now, it will be a lot easier for the AHB to approve projects that may not fit the letter of the guidelines, but that do fit the spirit of them, she said.

At the same time, there could be some truly inappropriate ideas that shouldn’t be allowed; the language of the new guidelines would still allow the AHB to reject those with appropriate authority, she said.

Wagner said the other option besides approving new design guidelines would be to keep things the way they are now, but as things stand, the AHB is often “scrambling” to find ways to approve downtown business’ requests.

“I think it’s just frustrating for the property owner,” she said. 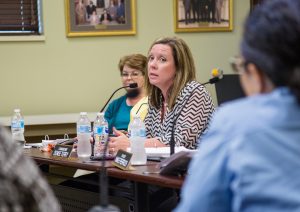 The Boyle County Board of Education approved the evaluation of Superintendent Mike LaFavers during Thursday’s meeting at the Boyle County... read more