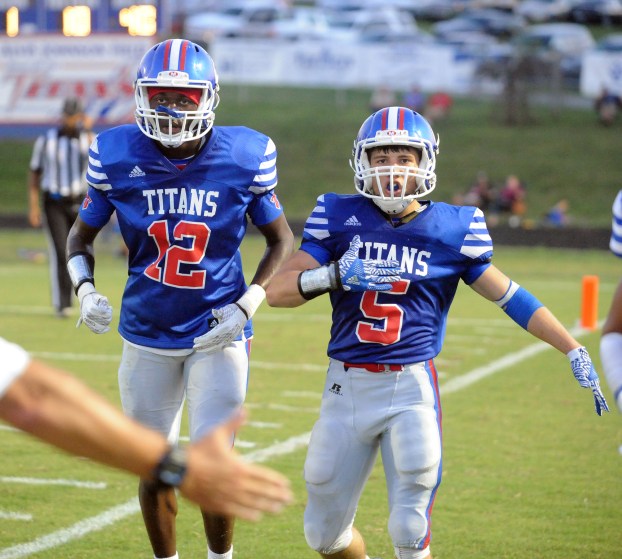 HARRODSBURG — Mercer County wasn’t quick out of the gate in Saturday’s game, but that changed after the first quarter.

The Titans beat Harrison County 53-7 in the 2017 Fort Harrod Bowl, but it didn’t look that dominant at the start.

“I thought we were not quite, I wish we would’ve finished things better in the first quarter,” Mercer coach David Buchanan said. “We didn’t finish a couple of drives and we weren’t real sharp. It’s sort of a surprise, the way we started this game, that’s what I would’ve expected in June and earlier. We’ve had a good July and I really thought we would come out and hit on all cylinders a little bit quicker. But this was good for us to sort of get started, get some confidence. We did do a lot of good things.”

Harrison County would score with 1:39 left in the first quarter to take a 7-6 lead, but that lead didn’t last. Jackson Lewis took back the ensuing kickoff 88 yards for a touchdown.

The game was all Mercer from there till the final whistle.

“I thought we played well offensively, defensively we got some scores,” Buchanan said. “All of that was good. I just think, overall, it was a good start for us and we can make a lot of progress.”

“He’s an All-American. When you stick an All-American on the field, the good thing is, I thought there was a lot of carryover from the success that he’s had in track,” Buchanan said. “I’m always going to be one of the biggest guys for multi-sport athletes. I just think that’s the route to go and I don’t think there’s any doubt about it.”

On the Titans’ next possession, Gillis found a wide-open Johnson in the end zone for a 33-yard score. Gillis finished 9-for-13 with 202 passing yards and three touchdowns.

“It’s night and day his comfort level in our offense,” Buchanan said of his quarterback. “I’m just really pleased with him and the job he’s doing.”

By halftime, the Titans lead had ballooned to 39-7.

Mercer started to pound the rock in the second half with a bevy of running backs. Lewis finished with seven carries for 62 yards and a score. The touchdown came early in the third quarter to put a running clock into effect.

“I thought (the running backs) did a good job,” Buchanan said. “Noah Irvin is going to be a good one, this is just the first time he’s played football since he was little. He’s going to be good. Easton Cocanaugher made some gains, Malachi came in there and hit that long run exactly the way we wanted. I think Jackson (Lewis) and (Bryson Yeast) are going to be good. We’re still holding back (Jamason) Sherrow because he plays a lot of defense, but he’s a very, very nice full back.”

Faulkner finished with just two touches on offense — a six-yard run and his 12-yard touchdown catch. His impact on defense — and the Titans’ defense as a whole — stood out to Buchanan after the game.

“He’s a great player. He does a great job for us and he was excited and ready to play,” Buchanan said. “The other thing about tonight, our D front and inside linebackers really helped him because there was nowhere to run the ball unless they bounced, and when they bounced our guys were there and took care of it.”

Trevon Faulkner is happy to be back on the football field. The Mercer County two-sport star is a favorite for... read more