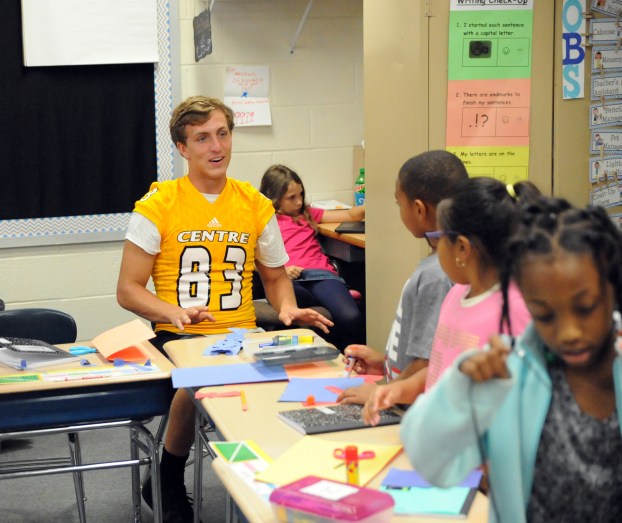 But they weren’t in the weight room or on the football field.

Instead, the Colonels sent student-athletes to Hogsett Elementary and Camp Horsin’ Around to give back to the community.

“This is something that we do every preseason,” head coach Andy Frye said. “It’s our opportunity to give something back to our community, and most importantly, for our football team, it’s important for them to learn that it’s not about them. It’s about the bigger picture.”

Colonels who went to Hogsett Elementary read books to students and helped with other classroom activities.

“During preseason, which is pretty much all football, it’s a great opportunity for our guys to step away and be with one another and serve,” assistant coach Jeff Collett said. “That’s something we tell our guys a ton, you never know a true act of kindness or the true meaning of leadership until you serve another person. To be able to go into a community that is very supportive of Centre and supportive of our student-athletes, it gives us a great opportunity to give back and let our players acknowledge that they’re a part of something that is greater than themselves. They can step outside of that and be able to serve through that.”

At Camp Horsin’ Around, the Colonels waded through the Chaplin River, picking up trash and building rock bridges for future campers. Other groups of Centre football players dove into the pond and cleared out cattails and other plants from the pond.

Frye said that “many hands make light work” and about 100 players went to Camp Horsin’ Around for a couple of hours.

Working in the pond may seem tough, but both coaches said the players enjoy doing it. Frye said doing something other than football practice gives them a boost, and doing things for others makes it more enjoyable.

“They love it,” Collett said. “They’re out there with their teammates, they can go out and wade in a creek, build rock bridges for the campers that’ll be there. They enjoy interacting with local kids that they may see at our games on Saturdays. It’s fun for our guys, it’s part of what they do. They have fun, they know why they’re doing it and who they’re doing it for. Any time you get our guys together, it’s going to be a good time.”

The Centre football team has been doing community service events like this for about a decade, Frye said. That service is good for the community but also good for his team.

Soccer fans are in for a treat Wednesday when two professional teams battle on the new Centre soccer stadium, Andrew... read more