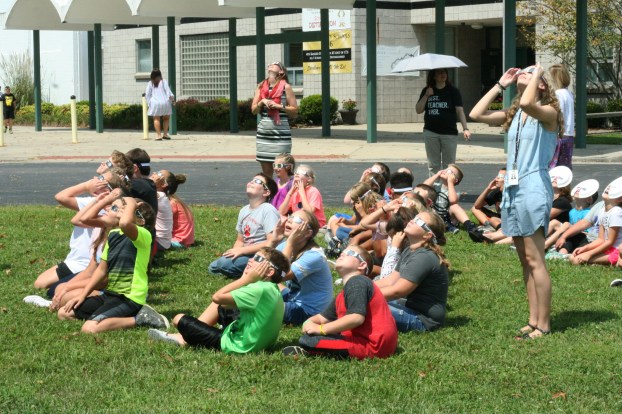 Pretty cool … but a bummer: Junction students react to the eclipse experience locally

All eyes turned to the sun at Junction City Elementary School on Monday afternoon, covered safely in their solar glasses.

“It’s pretty cool,” said Adryan Newell, a fourth grader, as the eclipse began. “It looks like the sun in the moon’s shape.” 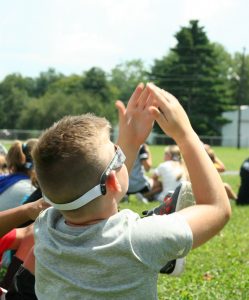 He was seated next to a classmate, Rilee Hoffman, who agreed that it was pretty cool.

“The first time, it wasn’t that small,” Hoffman said, explaining that the sun keeps getting smaller, meaning more hidden, each time he looks.

After watching the full progression, the two said they were a little disappointed the whole thing wasn’t covered.

Hoffman said he wishes the sun were “smaller.”

First grader Jordan Dunaway said it was “kind of weird.”

“I’ve never seen (an eclipse) in my whole life,” he said. “I expected it to be different.”

He said it was kind of cool.

Every student was given glasses, younger kids using plates to protect their whole faces, and older kids with bands to hold them tight. 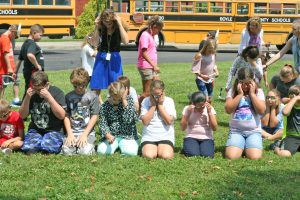 Kendra Peek/kendra.peek@amnews
Students at Junction City Elementary School look down as they put on their solar eclipse glasses.

Dunaway said his glasses were “pretty cool” too.

When asked how he would describe the eclipse, the youngster first said he couldn’t think of any comparison, but then said it looked like it was the PacMan game, when Mr. PacMan was “going down in the game,” eating the dots. 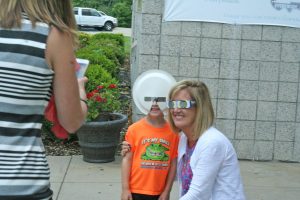 Kendra Peek/kendra.peek@amnews
Betty Jo Davis, left, takes a photo of Junction City Elementary School Principal Pam Shunk and student Landon Brown in their glasses at the beginning of the eclipse.

Anticipation The much anticipated nearly total eclipse of the sun in Danville Monday afternoon brought out about 400 people... read more