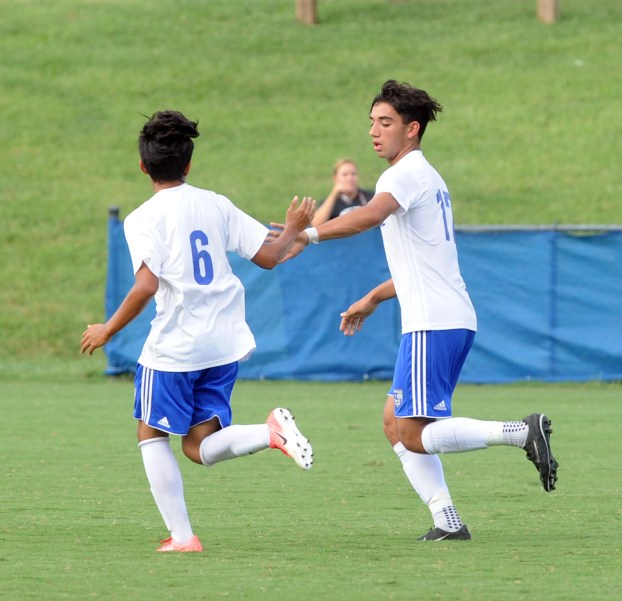 Danville’s boys soccer game Tuesday was called off due to weather, but it showed a glimpse of how effective the Admirals have been so far this year.

Taylor County scored the first goal, but Danville peppered the Cardinals’ keeper and finally scored — a header by Nathan Hazlett off of a Gabe Cisneros corner. In the second half, Briar Sanders scored to put the Admirals ahead 2-1 before the game was called due to lightning.

The Admirals have scored in bunches in their first three games this year — 18 goals in three games is more than any other team in the 12th Region — and coach Brent Beauman was quick to say that his 2017 team is one of the easiest he’s ever had to coach.

“This is just such a good team. They are easy to coach, they are dying to learn, they’re listening,” he said.  “It has been much different in practice than I have had in years, we’re all moving in the same direction instead of doing different things. We’re not talking about technique, it’s all tactics stuff. It’s all mental, thinking the game, the communication. It’s another level and it’s really fun to be able to coach that way and have kids soaking it all in.

“There’s no attitude or egos, it’s incredible. Your most talented kids are the ones who are working the hardest. It may never happen again, you never know. It’s just all of the things that you preach and push as a team culture and it really shows with these guys.”

Hazlett is a new name this year after sitting last year due to a transfer. But the junior is already connecting well with his teammates, and Beauman said that’s down to how long his team has played together, both at the school and in club soccer.

“They’ve all been playing together since they were five or six years old,” Beauman said. “Everybody knows everybody and it has just been a good mesh. Everyone knows they’re good players, they want to do well and get better. It’s been pretty much like they’ve been here the whole time.”

Goalie Keeton Burnside is another new name, and he takes over for the graduated Claudio Rodriguez. But he’s another who has stepped into a role and done well this year, Beauman said.

In front of Burnside are some familiar faces in unfamiliar positions. The Admirals graduated most of their back line, but experienced faces moved positions to make it work.

Seth Brunner and Ethan Redmond pair up at center back, while Sam Brunner and Tyler McGirr take the fullback positions.

“They’re doing a good job,” Beauman said. “They don’t have a ton of experience together, but they’ve played those positions before with JV or club. The games we’ve had, they haven’t been under constant pressure. You can see the inexperience, they kind of lose focus and then make a bad play. It’s the communication, if they would start talking to each other, it’ll be amazing what they can do.”

Danville’s next match is against Frederick Douglass in Lexington.